In Remembrance: Dobbs Ferry Commemorates the Armistice that Ended the Great War 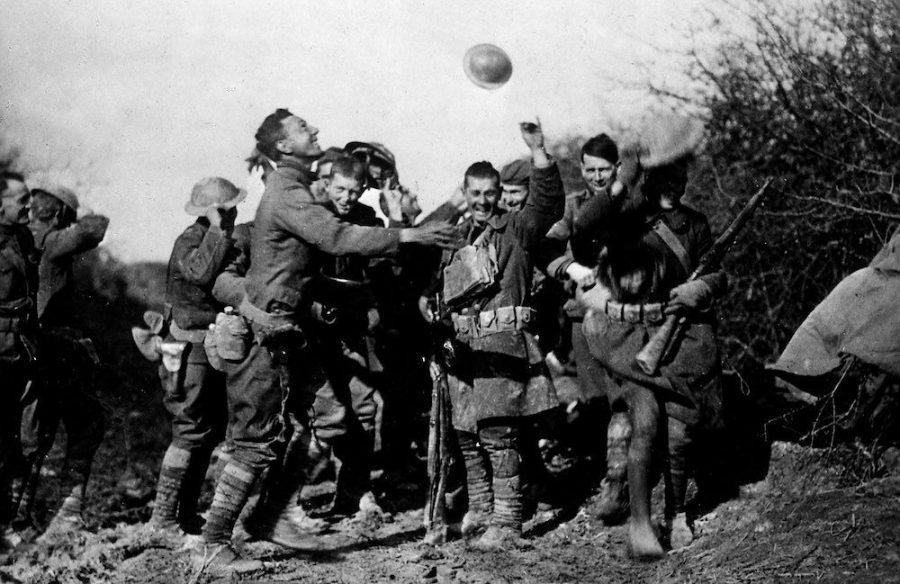 Eight million civilians, an estimated 11 million military personnel, 23 million wounded, and upwards of 19 million deaths. These staggering statistics measure the almost 40 million casualties from the Great War or has it has since become known World War 1.

Now, 100 years later, and an additional 70-85 million more lost in the Second World War, a direct result of the first war’s conclusion, the time for reflection has come once again. The marking of the 100th anniversary of the conclusion of the First World War was met with commemorations and memorials across the globe, all of which suffered to some degree by the effects of the global conflict.

The village of Dobbs Ferry recently memorialized its own historical connections to the conflict with a series of events and memorials held in connection to the war’s end. The first event, held at the Dobbs Ferry Public Library, was a discussion led by Dobbs Ferry Historian Richard Borkow on one of Dobbs Ferry’s most famous residents and their contributions to the war effort, more particularly their efforts in preventing it, the Villards. 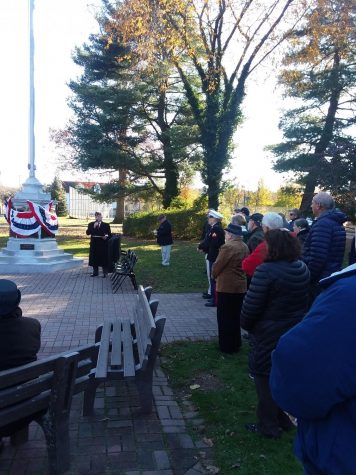 Oswald Garrison Villard was the son of Henry Villard, a German immigrant and newspaper correspondent, and Fanny Garrison Villard, who was the daughter of William Lloyd Garrison, an abolitionist. Fanny herself was suffragette and founding member of the Women’s Peace Movement. Oswald’s parent’s humanitarianism passed on to him. Villard was a champion of Civil rights and anti-imperialist sentiment. The Harvard graduate, journalist, and editor of the New York Evening Post used his editorial column to protest many of the injustices he saw in the country, specifically imperialism and expansionist sentiment. Villard was staunchly opposed to the Spanish-American War and was the founder of the American Anti-Imperialist League. Villard was also a founding member of the National Association for the Advancement of Colored People (NAACP) after donating space in the Post that eventually led to the meetings that formed the association.

“Oswald Garrison Villard’s advocacy and activism on behalf of the legal rights of African-Americans was extremely important. He was the champion and principal founder of the NAACP. His role in this regard was exceptional and makes him a figure of major historical significance,” said Borkow.

Villard was a staunch supporter of Woodrow Wilson during the 1912 election and was a fervent supporter of his neutrality when the war broke out in Europe. The Dobbs Ferry family favored a sentiment of neutrality that was unwavering, even in the face of the increasing threat from Germany and the reality that war was inevitable.

German policy of unrestricted submarine warfare was making the policy of neutrality difficult for the Wilson administration. The sinking of the RMS Lusitania on May 7, 1915, stoked a new “Preparedness Movement” that sought to remain neutral but build arms and supplies should involvement in the conflict become reality. The Villards were vehemently opposed to Wilson’s new shift in tone. After the German U-boat policy of unrestricted warfare was ceased, the tensions subsided. It wasn’t until the re-emergence of such U-boat policy and the Zimmerman Telegram, that the United States entered the war.

“When Germany decided to resume a policy of unrestricted submarine warfare in late 1916, announced that policy in January 1917, and soon after began to torpedo American merchant vessels, it became all but inevitable that the Wilson administration would respond by asking for a declaration of war, and that Congress would agree. Nothing the Villards might have said or written could change those decisions,” said Borkow

For Borkow, despite the Villards effort, their effectiveness as to whether it would have ever changed anything remains in question. “The Villards pacifism had very little influence on American policy, in my opinion. The impact of their pacifism was quite limited, both in our area and in the country as a whole.” 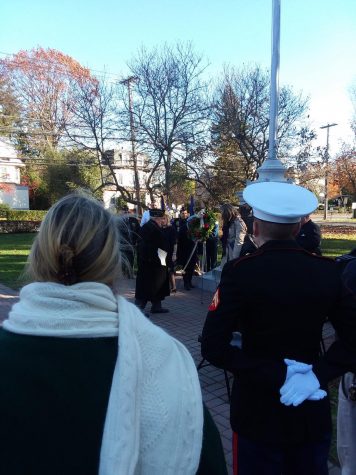 Following the discussion, the Historical Society next commemorated the conclusion of the war with two ceremonies. On Nov. 10, the Historical Society held a celebratory dinner at the historical Mead House. The dinner, themed around traditional plates and food served during the era, featured letters and correspondence from local residents overseas during the conflict, and a coffee time quiz, which every table competed with to answer correctly. The evening’s entertainment was a selection of songs and letters performed in character by Linda Russell, early American balladeer. The performance featured readings of letters from soldiers on the front, joyous sing-a-longs of ballads and marches that stoked the spirits of those in the trenches, and even a powerful rendering of Irving Berlin’s “God Bless America.”

For Kevin Farrington, President of the Dobbs Ferry Historical Society, these events are integral to preserving the history and memory of those who served and who lost their lives in the conflict.

“I think it is very important especially as time passes. Many young people have a very limited knowledge of our history and these events (commemorations) keep them from being forgotten.”

It is also important that despite whether these events commemorating our historical past are done frequently enough around the country, it is always important to make sure people understand why they are happening and its purpose.

“Whether or not they are done enough is a matter of varying opinion but hopefully that our citizens can balance the holiday celebrations with a sense of appreciation as to why the holidays exist.”

Dobbs Ferry Mayor, Bob McLoughlin, echoes the same sentiment about the memorials and commemorative events held in accordance with significant historical events. “It is very important that we continue to remember all those that sacrifice their lives and well-being to serve their country.”

The final event commemorating the armistice that took place 100 years ago was the re-dedicating of the memorial bell on the grounds of the Dobbs Ferry High School. The re-dedication, which featured a performance on bagpipes by veteran and local resident Kyle Lindsay, a performance of “The Star-Spangled Banner” by resident Joe Rooney, and a wreath commemorating the men who served in World War 1 from Dobbs Ferry was held on the very day, exactly 100 years from the day the armistice was signed, Nov. 11, 2018. 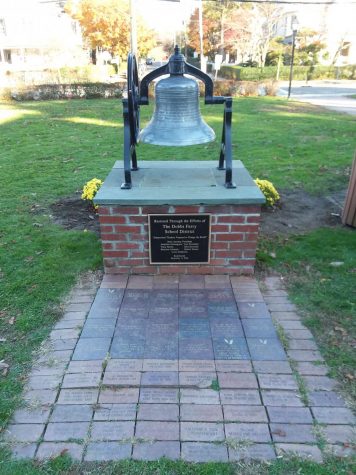 For McLoughlin, it was a combination of both Veterans Day and the anniversary that sparked the special event.

“The events for the 100th Armistice Anniversary and Veterans Day coincided this year and the village wanted to do something special for this occasion. We decided that we would redo all of our memorials within the village especially the World War l memorial in front of the high school to honor the brave but not forgotten service men and women.”

The actual monuments themselves were restored by Sleepy Hollow Memorial restorative company MONUMedic, the timing of which made it possible to coincide with the anniversary of the armistice according to Farrington. “At no charge, the company evaluated six monuments in need of restoring and submitted a proposal. Among these was the school bell which was referred to the school district for a decision. The district also wanted to share in the restoration of the WW1 monument since it is located on school property. It was then decided to have a joint rededication ceremony.”

Along with the re-dedication of the bell, a wreath adorned with five remembrance poppies memorializing the five Dobbs Ferry residents who served in the Great War. The remembrance poppy is an artificial version of a common field poppy that is used to memorialize those who served in World War 1. The idea was championed by Moina Michael, a professor, and humanitarian. The idea came from the famous poem written during the war called “In Flanders Fields.” The poem was written by Canadian Lieutenant-Colonel and physician, John McCrae. His inspiration came following the funeral of his friend and fellow serviceman Lieutenant Alex Helmer, who was felled at the Second Battle of Ypres. He wrote the poem on May 3, 1915, following him presiding over the funeral. The references to the red poppies that grew over and adorned the graves became the symbol of the remembrance poppy. The five-remembrance poppies that coated the wreath were in remembrance of Edward J. Condon, John C. Eberspacher, Emil Lang, Paul Schlutow, and Michael Zanni, who were Dobbs Ferry’s five servicemen who served in Europe.

The brisk November weather was raw and poignant, and it added a layer of significance, the elements resembling what those trudging through no man’s land or cocooned in their trenches must have experienced 100 years prior. The tone that was set was a memorable one for such a historic occasion for Borkow.

“Since Nov 11, 2018, marked the 100th anniversary of the armistice that ended World War I, it was very desirable for the historical society and the village of Dobbs Ferry to rededicate the bell and the historical plaques, and to schedule other commemorative events. I thought the various ceremonies were conducted in a dignified and appropriate way.” 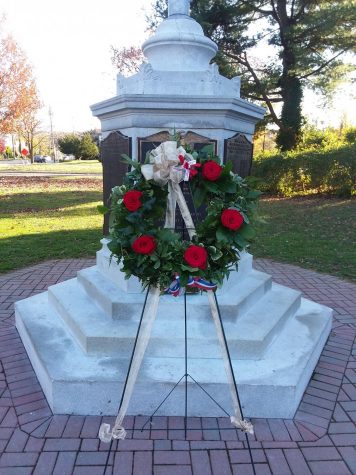 The events organized by the Village of Dobbs Ferry, the Dobbs Ferry Historical Society, Dobbs Ferry School District, and volunteers were designed to honor and remember the lives of those who served, the lives of those who were lost, and all the lives of those who have since served. It was a remembrance of the “war to end all wars,” and despite that not being the case, the historical significance on the conclusion of one of mankind’s largest conflicts cannot be understated. Such events require the cooperation and dedication of those passionate about not only our history but of our society as a whole. But there is always room for more participation, and future events would only benefit from the support and assistance of dedicated individuals says Farrington.

“I think the village has a role to play but various groups can help to enhance the quality of the events. In 1925, a VFW Post took the lead in the erection of the World War 1 memorial and as the inscription reads assisted by the people of Dobbs Ferry. We repeated the template again by getting the Village, School District, American Legion Post 1048 assisted again by the people of Dobbs Ferry. It made for a broadly supported endeavor. I think the ceremony was appropriate and dignified. As we know it wasn’t the war to end all wars but as Lincoln said we can never forget what they (veterans did). The men who served and died enjoyed many of the small-town things we enjoy today. Many of those veterans still have descendants in the area.”

The village of Dobbs Ferry continued its tradition of rich history and the memorialization of it when it recently became a Purple Heart village, in remembrance of those who served in the Great War’s direct result, the World War II.