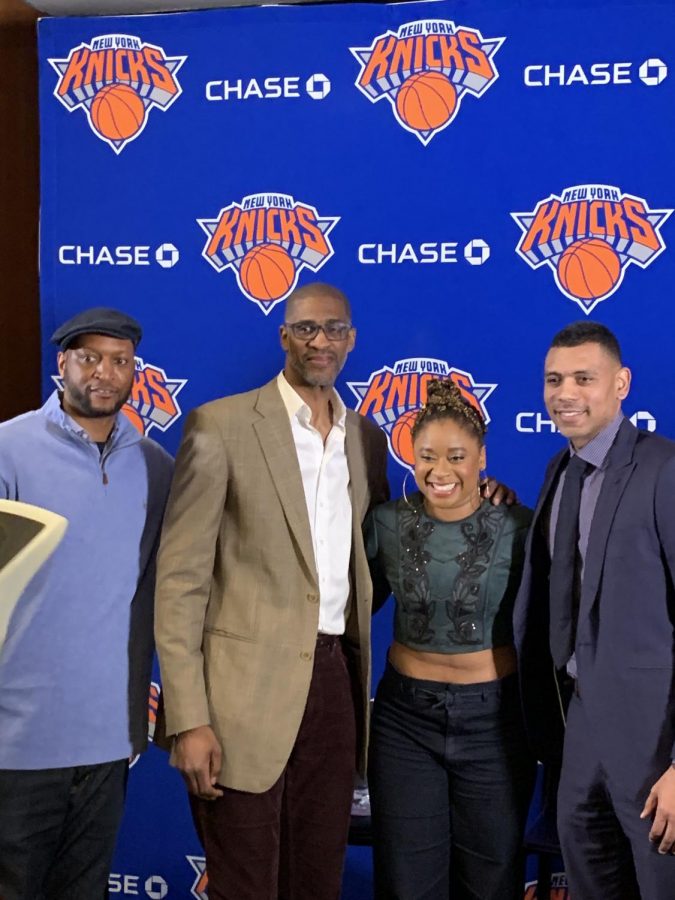 The league has not only become younger, but faster and stronger too.

Attributing the change in pace to NBA legend LeBron James, Wallace said without him, many current players would have still been stuck in the same mold as they were back then.

He also said that social media played a huge role in these gains. Without them, players wouldn’t be able to flourish anywhere near as much.

Wallace, of course, is talking about the business world.

“During my last two years in the NBA, I was seeing how guys playing before me, that were now retired, had entered the business world. Then it hit me. I could do that too.”

On a cold and unforgiving Feb. 27, as Black History Month made its way to another impactful conclusion, the New York Knickerbockers, one of the NBA’s most progressive teams, concluded it with a notable event.

Within the depths of Madison Square Garden, in the MSG Club Bar & Grill Suite, a packed crowd was in place to watch two panels share their wisdom on the rise of black people in the workforce.

The Impact was sitting at center court.

While both panels may have featured two different groups, both rallied around one theme: black men in the business world.

An NBA player’s financial life is an aspect of one’s career that is taken for granted.

While it’s nowhere near as bad as the average National Football League player, 60 percent of NBA players are suffering through financial difficulties or bankruptcy only five years after the end of their playing careers, according to a 2009 Sports Illustrated report.

For many young black players, the writing is already on the walls for them to fail before even entering the NBA. Many of these athletes come from low-income areas where they could only escape their communities on their ability to play a children’s game.

With some even choosing to forgo college (or spend only one season) and enter the draft straight from high school, to immediately provide for their loved one’s back home, it’s understandable to see how the combination of someone in their early twenties with millions of dollars and a lack of advice would create issues.

Notable players such as Shawn Kemp, Dennis Rodman, and even Allen Iverson, who made over $150 million in his playing career, have all notably suffered financial struggles, despite making a comfortable sum of money over the course of their careers.

The ability of transforming from a pro basketball player to a businessman was a key speaking point amongst the two panels.

Allan Houston, a man most famous for hitting a game-winning running jumper against the Miami Heat in Game 5 of the 1999 Eastern Conference Quarterfinals, has now succeeded enough off the court to make a living for himself.

“There were many obstacles to succeeding. Basketball consumes you and you’re always receiving instant gratification. But business is different. Things can take time.”

Smith also followed this up later with another strong comment. “Life in basketball is rapid, you want to get things done. Business is the opposite, it takes time. You need to learn how to change that tone because it’s a different environment.”

With all three giving an insider view of what allowed for them to become successful businessmen, the virtue of patience became another vital talking point. Charles Smith’s take on this best summarized the tone.

“Rejection is an issue, it happens, and you need to be able to accept it. Keep going. It’s all about time, effort, and work.”

The Front Office Panel, featuring some of the most powerful figures within the Knicks organization, also preached the importance of taking what life offers.

Scott Perry, the man responsible for assembling the future of the Knicks, gave an overstated, but important message from this.

“One tip I could offer was to remember that you need to put time, work, and focus into anything. You also need to be able to accept the highs and lows in your life.”

But the change of living and making your money off of the court was one that needed to be stated from both panels.

For a group of men who all have made millions of dollars from basketball, their ability to give personable and authentic advice became a rallying point.

One notable example of this came through Craig Robinson. “I realized, if I want to be the Vice President, I had to act like a Vice President.”

It was these little answers that carried that largely impact amongst the crowd, with constant applause from the audience.

Of course, a speaking point of the organization was on diversity.

The NBA is the clear leader in diversity amongst men’s professional leagues in America.

On The Institute for Diversity and Ethics in Sports’ (TIDES) “2018 Racial and Gender Report Card: National Basketball Association,” the league received an “A+” in terms of diverse hiring practices.

While gender diversity took a small dip, the significant increase of racial hiring led to the league’s overall score increasing.

This followed Mills’ claims of the leagues increase in diverse hiring practices. Much of the praise was aimed toward the current NBA Commissioner, Adam Silver.

“Silver has continued to build on his legacy, he has given the platform to allow players to express themselves.”

Even from some of the earliest moments of Silver’s tenure, including the Donald Sterling Controversy, which saw him not only fined from $2.5 million dollars but also being banned from the league for life, and being forced to sell the Los Angeles Clippers to current owner Steve Ballmer, for leaked racist comments, Silver has shown the willingness to make a statement in the name of racial equality.

Smith also connected the ability for black men, who make up nearly three-fourths of the league’s player’s new ability to prosper due to social media.

“Technology is helping young black men to succeed in the business world. Ideas take lives of their own because of it.”

Along with many of these tips, came a lot of the cliches. Such as that you’ll never know who you will meet, to always treat others with respect, and to make connections and keep in touch with those around you.

In an exclusive Impact interview with Wallace, he offered more insight that wasn’t given during his panel, such as what triggered a rise for young athletes in today’s game to enter the business world.

“I would have to say people are more in touch and intact with what’s going on in the world, along with their brand. I think LeBron started that whole ‘being business savvy and starting your own business accruement’ so I’d have to point it toward him. But everyone piggybacked off of him, and it’s been a beautiful thing. It’s better to see that compared to what we were seeing prior, when they were doing these shows but losing their money. It’s really awesome.”

This is true – LeBron has ushered in an era where it’s become more acceptable for athletes to become more than athletes.

While there’s no need to ignore his predecessors like Michael Jordan or Shaquille O’Neal, LeBron has become the face of a generation of black athletes who are trying to take their influence to the next level. Carmelo Anthony, Kobe Bryant, and many more current athletes fit this group.

But for Wallace, the trigger didn’t kick in right away, unlike many young players today. He attributes that to the league becoming a place for younger players to carry out their goals. Much of what is happening now is against what he was told as a youngster, trying to make his name for the Knicks.

“Herb Williams and Charles Oakley taught me to not get into business until my sixth year in the league, just let my money accumulate until then.”

Wallace cited Williams, the current New York Liberty Assistant Coach, as his personal mentor, playing a large role in his move into business off of the court.

When asked if Wallace could give one piece of advice to current young players, he kept it short and sweet.

“Make sure you watch over all of your own business.”