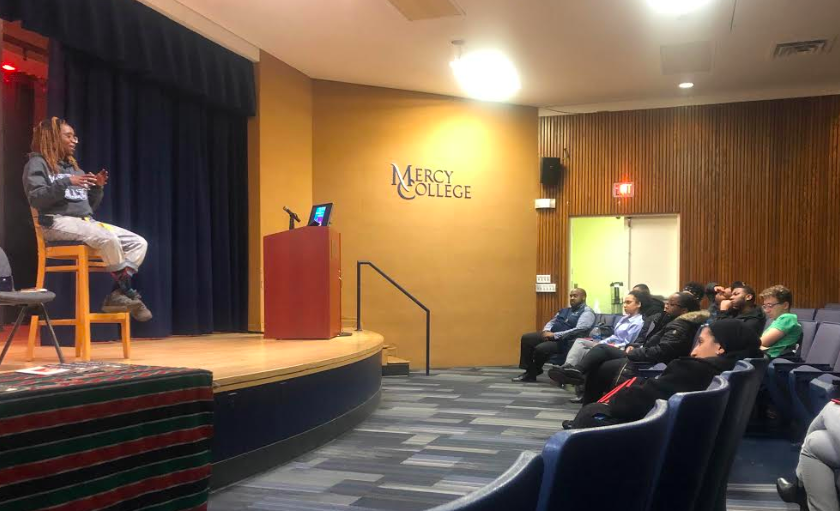 “A poem is a protest,” she said as she paused, explaining her next piece after the audience suggested the theme of “Justice.”

February is Black History Month and Katwaiwa expressed how it should also be called Black Future Month, as a way to look forward on the advancements of black people and to spread honor to highlight the past.

Katwiwa recited a few of her poems from her new book “Becoming Black,” which she also sold and signed at the end of the night.

Katwiwa began to do a question and answer as she performed, explaining the inspiration for her poems and enlightening students of the current injustices that happen towards the black community. 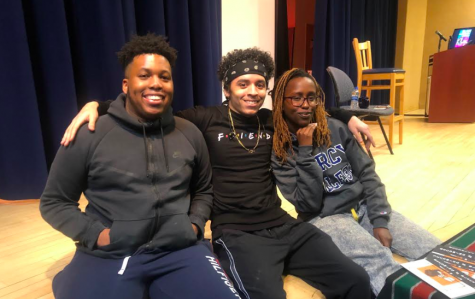 She started off by asking the audience if they knew what today was, to which she answered was the anniversary for the death of Trayvon Martin. It was a tribute to her next poem “the seven deadly American sins”. She explained how the inspiration was the way the media portrayed the young boy compared to his murderer. Being a woman in college at the time of his death made her feel like she had to put her head down and put it to paper.

“I was watching a trial that was over long before it could begin so when the verdict finally came in all I could hear were the words of the late Dr. King calling us to not allow the deafening noise of injustice to drown out the sounds of freedom ring,”she performed as the room went silent.

All of a sudden the popcorn noise of people snapping overcame the space as the students of Mercy College praised her.

Katwiwa then went on to ask the students if they knew what Feb. 7 was. A young girl responding by stating Sandra Bland’s birthday. Katwiwa the explained who Sandra Bland was and #sayhername was as it was the inspiration for her next persona poem. Sandra Bland, a young woman who was found dead in her jail cell after being arrested for a traffic violation on her way to a job interview.

Katwiwa taught the students that #sayhername was a way that people could see information online about the multiple black women who were killed due to police brutality since it was not being acknowledged in the media as much. “Maybe your voice in death had more baritone,” Miwa recited to the crowd.

Katwiwa also explained how the #blacklivesmatter movement began in the same way. When Mike Brown was brutally killed and left on the street, instead of calling an ambulance, the police sent more troops to fight against the people who were protesting for his death. The black community could find out more information following the hashtag than one could through the media.

Katwiwa taught the students that #blacklivesmatter is now a collection of the different injustices that happen to black people that go unreported. It is not only for police violence, but it also includes state acts of violence.

Her last poem, “the joys of motherhood” was inspired on reproductive oppression or what she likes to call reproductive justice which according to Katwiwa is the “legal framework that protects your reproductive health.”

“I do not want children who will live forever in the pages of poetry yet can’t seem to outlive me,” Katwiwa recited as the crowd listened in awe.

“I love a participating audience so I’m very thankful for this one,” Katwiwa said with a smile as she signed her book to the eager Mercy college students.

For all the aspiring poets and writers she advices, “Don’t stop because you’re young… don’t think you can’t be successful. Just put the pen to paper and write what’s in your heart.”