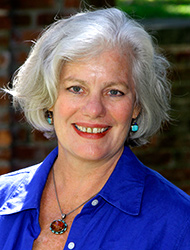 In the courses she teaches, Larkin incorporates holistic nursing techniques. She believes in theory-informed practice, as there are many additional ways of facilitating healing besides prescribing medications. Her students learn health-patterning modalities such as progressive relaxation, imagery of a peaceful place in nature, aromatherapy, reflexology, therapeutic suggestions, and mindfulness.

For decades, she has studied and taught nursing as an art and a science. She enforces Martha Rogers’ unitary nursing science in which the whole is viewed differently from the sum of the parts.

“Too often, care is particulate; just treating the part. To engage in a holistic practice, one must have a unitary perspective as well as an ontological caring presence with each patient,” Larkin states.

As well as a college professor, Larkin has a private practice in psychotherapy and holistic nursing where she puts to work all that she has taught to and learned from the people she’s encountered throughout her life.

Larkin believes in the power of a co-creative process where the nurse supports all intentions set to increase the patient’s health. She promotes active participation and greater self-knowing to better facilitate healing for each patient. Her goal is to bring awareness to counter learned-helplessness and to make instinctual other self-oriented methods of healing and active participation for both the patient and their families or caregivers.

Today, holistic health and other unconventional modalities that fall underneath are becoming more accepted and used by professionals and the public. Larkin, a pioneer of her time, persevered through an era where these sorts of practices were still rather taboo and the people practicing them might’ve been considered “quacks.”

Years ago, she attended college at the University of North Carolina in Chapel Hill for Nursing. There, she took an elective course in Medical Hypnosis and had a rotation in a burn unit. During her rotation, she came across a burn victim who was six-months pregnant. Larkin wondered why the woman was being medicated instead of being taught self-hypnosis. That incident sparked her future choice to work her first job in the burn unit at the University of Virginia.

Larkin tells a story about a very memorable patient she worked closely with in the burn unit. This woman had burns on her face, chest, hands, legs, and feet, but she didn’t like the way the medications made her feel. Larkin would help the patient engage her imagination while performing painful treatment using progressive relaxation imagery and hypnotherapeutic suggestions to keep her mind off the pain. During the fifth round of treatment, the woman opted out of medications and went through the whole debridement on her own. Larkin and her colleague videotaped this wonderful session. Larkin explains two of the woman’s remarks after her fifth treatment to be something amazing that she since uses alongside the video footage in all her teachings.

“It’s getting better every day,” and “I can’t believe I just did that.”

Larkin instilled a lingering presence with this woman in the burn unit. When the therapeutic benefit of one’s work with a person continues after they’ve left the room, a co-creative process of lingering presence has been accomplished.

It took place just shy of 40 years ago and Larkin remembers the enlightening moment vividly.

“The thing that was beautiful too is I just got so excited about this possibility that I thought, ‘I want to study this’ and then I wrote to Milton Erickson.”

Dr. Milton H. Erickson was an American psychiatrist who specialized in medical hypnosis and family therapy. He was renowned for his work in hypnosis and eminent in psychiatric circles. In his later years, he would work with people in Phoenix, Arizona, mostly professionals, and invite them to come and stay for a week to take part in the training. People waited for years, but Larkin told him about her work and he told her to come whenever she could.

She packed up her house, quit her job, and planned on completing a sabbatical, traveling around the country to visit others who were using naturalistic approaches and hypnotherapy for pain management. She was headed his way, but he died just before she got the chance to meet him face to face.

After grieving, she became so curious about what it would have been like to meet him that she dove deep into his work and became the first nurse to be titled President of the New York Milton H. Erickson Society for Psychotherapy and Hypnosis. Larkin has incorporated his teachings into her life and career.

There’s no denying that certain aspects of Western Medicine have their place; however, it isn’t the only way, as so it conditioned many to believe, she feels.  Because of innovative minds like that of Larkin, holistic healing practices are becoming common practice amongst all walks of life.