Social Media Addiction Can Become Too Much For Users 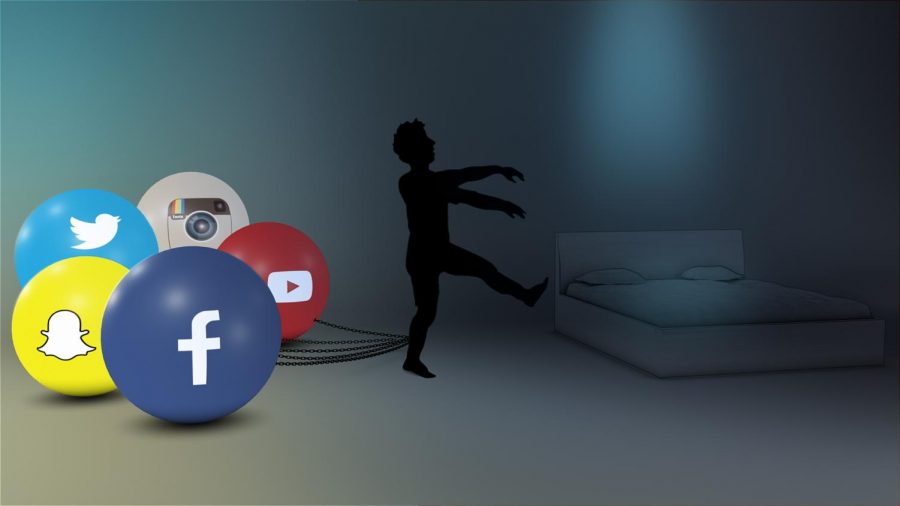 “Social Media is a great new way to reconnect and network with old friends and distant family!” said everyone in the early 2000s.

Almost two decades later, some are cringing and the others are oblivious to the fact that social media has had an impact comparable to a nuclear war, say some experts.

In the late 1990s, there were a handful of smaller and undeniably less-successful social media platforms than the ones that are used today. The idea behind “social media” was to give people a convenient way to connect with others whether they lived next door or on another continent. The hope was to promote social interactions and increase participation in virtual communities.

Facebook, Instagram, Snapchat, and Twitter took flight almost instantly and people from every age group and social class created their accounts. It started out entirely innocent; a harmless and leisurely activity, but it has grown over time into something rather monstrous.

People went from periodically updating distant friends and relatives on their lives to publicizing every move they made and emotion they felt.

Instagram now hosts users that obsessively falsify their physical appearances and cause envy-rooted suicidal consequences amongst their followers.

Snapchat became a leading cause of cheating in relationships.

The line has been severely crossed, some experts argue.

Second only to Youtube, Facebook is the second most active social media as nearly 68 percent have a Facebook, according to Pew Research Center. Nearly two third are active daily and 96 percent use mobile apps to access it. The study adds that the numbers have remained constant while the growing media is Instagram. The average time for all users is 35 minutes of social media a day up to one hour.

The most active demographic of all Facebook Users are men ages 25-34, which takes up 19 percent of users. Women in the same age make up 13 percent. SproutSocial statistics state that only 51 percent of teenagers are on Facebook, which makes it the fourth most popular social media. Yet nearly 85 percent are active Youtube users, 72 percent are on Instagram and 69 percent are on Snapchat. About one third use Twitter.

Students from Mercy College were chosen at random and questioned both on and off the record about their social media habits. More than half of them kept their cell phones in their hands during the interview. Most of them admitted to using several social media platforms as religiously as they breathe.

They ranged in age from 18 to 22, so the younger ones have never known the world to be different than this. There were some claims that even small periods of time without access to their social media accounts made them feel a sense of freedom, yet in the same breath that they wouldn’t be able to live without them.

Former President of Facebook, Sean Parker, mentioned this habitual behavior in his 2017 interview with Axios. He admitted that the founders of Facebook, including himself, knew full well that they were creating something addictive. He told about their goal to consume as much of people’s time as possible, knowing that it would negatively affect brain function.

Students tuning everything out and robotically scrolling through their news feeds became a norm in classroom settings. Because of that, schools started treating cell phone usage like a federal offense. Some Mercy College professors, among others, used to their advantage the already over-abused habit and are now requesting for students to use their cell phones and social media applications for in-class assignments and activities.

Abdullah ElShafie, 22, feels as though there’s too much trouble brought about by social media, and although he is a participant, he knows when enough is enough.

Tyanna Virgil, 18, is also a student who acknowledges the negative attributes of social media.

“I feel like when I delete it, I’m very much more focused on me and what’s going on in my life rather than other people’s lives!”

College is an opportunity given to people who make the choice to buckle down and expand their knowledge. Students are in the prime of their life. They act as sponges; curious and soaking up tons of information. It’s unfortunate, though, when most of their energy goes into what’s happening in their cell phones. People have lost the ability to be patient. With everything at their fingertips 24 hours a day, instant gratification is expected. Even some of the ones who acknowledge the problem still can’t seem to put down their phones.

Luckily, as of recent, people are stepping away from social media and relearning what it’s like to live in the moment and take part in real life again. Hopefully, this trend becomes just as contagious as social media was in the first place, to give the world a more hopeful outlook on its future.