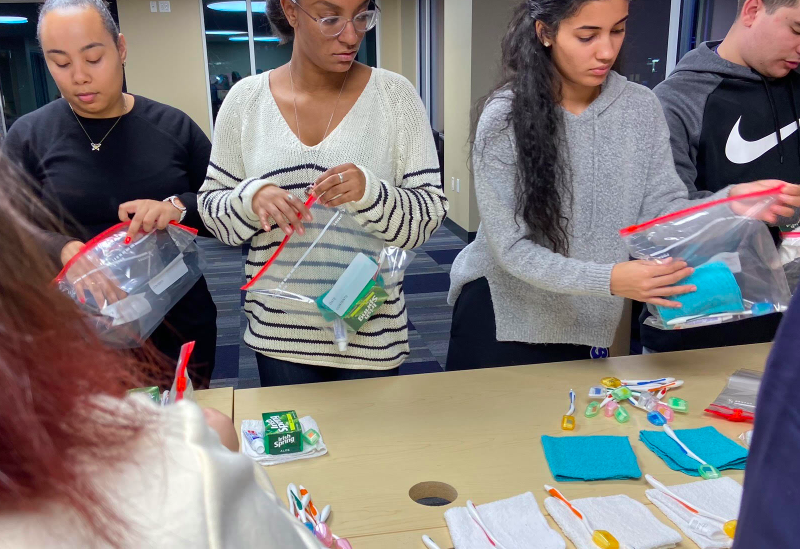 The Humanitarian Society collaborated with resident assistant Briyanna Hutchinson on a project called Hands For Homeless this Thanksgiving and holiday season, where they organized an array of sanitary products to be donated to the Open Arms Men’s Shelter in White Plains.

The club was able to organize 63 bags, each filled with a toothbrush, toothbrush cover, bar of soap and a washcloth.

Hutchinson came up with this idea after noticing the number of homeless people in Harlem. She then started to do some research on homelessness around the area and its causes.

According to The Bowery Mission, every night more than 63,000 people sleep in the New York City municipal shelter system, up 43 percent from 10 years ago. Nearly 4,000 more sleep on the street, in the subway system or in other public spaces. In most cases, multiple factors are involved. Common factors include mental illness, substance abuse, untreated medical issues, traumatic events, violence and abuse, lack of affordable housing and difficulty sustaining employment.

“We tend to think homelessness happens due to drug abuse or because the person is lazy and that it’s always their fault, but sometimes life just happens. Some people get there house foreclosed or become unemployed. Sometimes bad circumstances just happen,” Hutchinson said.

Hutchinson and the president of the Humanitarian Society, Alyssa Pagano, requested the budget to Student Life in order to provide the toiletries to the shelter.

“I was more than excited that Bryanna reached out to us with this project because it’s what our club is prided on which is giving to others. It feels amazing to give to those who need it especially with Thanksgiving being around the corner. I think overall this event went quick and smoothly, except for Student Life forgetting to order plastic bags,” Pagano said with a chuckle.

This event took months of planning and preparation.

“We had to do a lot of research to find the right shelter to donate to and to get all the materials we needed within our budget we looked on Amazon and Walmart,” Hutchinson said.

The materials were placed on a table in the Hudson Hall Lounge where the Humanitarian Societies group members orderly placed the toiletries in a plastic bag.

The group members were able to get the job done in about 15 minutes and they were very passionate about the cause from start to finish.

“It felt good giving and helping others and I am proud of the impact our club has done,” a sophomore named Mia said.

“I like helping the community because it could very well be one of us and I hope it makes an impact in these men’s lives,” said freshman Leah Leavy.

For over four decades, Open Arms Men’s Shelter in White Plains operates a 38-bed shelter for men in need of temporary housing.

Most men are referred through the Westchester Department of Social Services, while the remaining 25 percent are walk-ins or off the streets.

Many residents struggle with substance abuse or mental illness, HIV/AIDS, or have co-occurring disorders. Some are just out of prison on parole.

The shelter provides much more than a bed, a shower, and a meal. Guests receive support and encouragement to engage in substance abuse and mental health recovery programs or employment services. Each man is encouraged to follow their own, unique path to a better life.

Open Arm’s Staff includes case managers, client care workers and managers working as a team. Each resident is personally matched with a caseworker, who works with them to develop an individualized program to best meet their needs. Their objective is to place residents in transitional or permanent housing while moving them toward independent living and as quickly as possible.

Hutchinson was able to drop off the toiletries to the men on Dec. 5. This was the moment she would see her hard work pay off.

“I love giving to others. I grew up in the church so giving to others has always been something that was instilled in me,” said Hutchinson. “I am looking forward to physically handing this to the shelter and seeing the faces of the men we helped in a small way.”