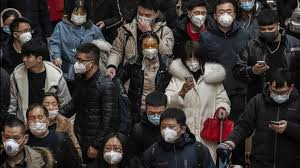 The new coronavirus has been declared a global emergency, as the outbreak continues to spread outside China, according to the World Health Organization.

Coronavirus is a group of common viruses. It is a respiratory illness that causes an infection in your nose, sinuses, or upper throat.

Symptoms can include fever, cough and shortness of breath. Some patients may show mild symptoms and recover, while others have developed life-threatening complications like pneumonia, according to the U.S. Centers for Disease Control and Prevention.

It does not have an official name yet, though the current designation is 2019-nCoV, with 2019 for year of discovery, n for novel or new, and CoV for coronavirus.

Huanan Seafood, closed by officials on Jan. 1, was a wet market, that sold fish and meat, some of it from wildlife.

Health officials believe that the virus was initially transmitted from animals to humans, and can be spread from human-to-human-transmission.

There are still a lot of unknowns, including how contagious it might be.

Mainland, China now has more cases of coronavirus than it had of SARS, a respiratory infection that spread across China in 2002 and 2003 and killed 774 people in 17 countries.

SARS, also known as, Severe Acute Respiratory Syndrome, is commonly used as a reference in coronavirus coverage, since both originated in China and share characteristics.

According to the World Health Organization, during the SARS outbreak, China had 5,327 cases and 349 deaths.

Over 400 people have died from 2019-nCoV, and more than 20,000 cases have been confirmed in Mainland, China, according to various news outlets,

On Jan 30, around 7,000 people were held on a cruise ship in Italy as a couple were tested for the virus and Russia has shut down its border with China.

Nearly 60 million people were under partial or full lockdown in cities in China for a week and the US, Japan, and several other countries flown their citizens out of Wuhan.

Over 3,000 people were being held on a ship in Japan after someone tested positive for the virus.

According to various news outlets, the United States and Australia are temporarily denying entry to noncitizens who have recently traveled to China, while Japan have bared foreigners who have been in the infected area.

Seven cases were confirmed in California.

One case was confirmed in four other U.S. states, those states being Wisconsin, Washington, Massachusetts, and Arizona.

Multiple patients who have just came back from the infected area are being tested in New York City, there is no confirmed case yet, according to news sources.

According to other health officials such as Mercy College’s Health Office, there is currently no vaccine to prevent against the virus. “The best way to protect against infection at this point is to avoid being exposed to the virus,”  Colleen Powers, Director of Health and Wellness, told the Impact News.

The health office is closely monitoring information coming from the Centers for Disease Control and Prevention (CDC) and New York State Health Department as to next steps in the community, according to Powers.

Powers says that there are simple everyday preventive actions to help prevent the spread of respiratory viruses. Those actions include; to avoid close contact with people who are sick, and to avoid eye, nose, and mouth touching with unwashed hands. One should wash their hands often with soap and water for at least 20 seconds and use an alcohol-based hand sanitizer that contains at least 60 percent alcohol if soap and water are not available.

Since there is no vaccine to prevent the virus, the health office feels that it is important to follow the above steps. For more information on steps to take, visit Mercy College Health Office website under health alerts.

The CDC considers this new virus a public health concern based on current information. However, the immediate health risk to the general US public is considered low at this time. The CDC and the World Health Organization are closely monitoring the situation and providing ongoing guidance.

Powers has stated some Key Points for Campuses which include, following guidance offered by CDC, which is evolving rapidly in response to the current coronavirus threat. One should contact local or state health departments for additional guidance.

“Many strains of coronaviruses are ubiquitous and are often responsible for symptoms attributed to the common cold, 2019-nCoV is a concern due to the lack of knowledge about it,” Powers added.

According to Powers, currently, the biggest threat for spread of 2019-nCoV on campuses comes from visitors and tourists. “Campus officials should be particularly mindful of delegations visiting from China.”

There is currently no basis for changing business as usual regarding housing, campus events, and other circumstances under which large groups of people will be gathering. There is also no indication for use of masks by the general public at this time.

Powers stated that campuses should begin assessing planned travel and study abroad programs for the winter and spring for viability and safety.

Powers believes that everyone should continue promoting vaccinations such as the flu shot.

“It is important to note that campuses should continue to remain vigilant regarding seasonal influenza and to promote vaccination and prevention using the preventative actions,” Powers stated.

CDC estimates that so far this season there have been at least 15 million flu illnesses in the US, 140,000 hospitalizations, and 8,200 deaths from the flu, according to Powers.

“The flu is currently a far bigger threat than Coronavirus in the U.S.,” Powers stated.

Though the flu shot does not prevent the Coronavirus, the health office still advises students to get their flu shots, considering how serious it has become.

Flu shots are given for free at the health office, students are more than welcome to stop by.

Powers stated that the Flu can lead to serious illness, hospitalizations, or even death in immunocompromised individuals.

Both illnesses are serious contagious respiratory diseases. There are currently more Flu cases in the US than Coronavirus, due to the fact it started in China. The CDC, World Health Organization, NYS Department of Health along with multiple international medical agencies are working to determine exactly how the virus is spread, along with ways to contain it and treat it.

“Details change daily which makes it harder to understand this disease. You cannot determine if one of these is worse than the other since there are still so many unknowns about the Coronavirus,” Powers stated.

The Health Office is able to screen for Influenza with Rapid Influenza testing, “based on the results we are able to treat with antiviral medication if indicated,” Powers added.

Powers stated that the greatest risk of infection from the Coronavirus are citizens in China or people who have traveled to China.

According to news outlets, state health departments are looking into next steps. Those steps include having the departments use a CDC test to speed up diagnoses of the virus and to develop a vaccine or treatment.