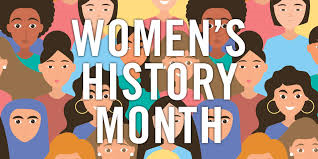 Though March must end, the history of the women before and after this time does not.

In honor of March’s Women’s History Month, Mercy College students and other local New Yorkers spoke on the women who inspires them.

Before women had the whole month, the U.S. recognized Women’s History Week; before that, a single International Women’s Day.

The first Women’s Day took place on Feb. 28, 1909, in New York City, as a national observance organized by the Socialist Party. National Women’s Day now falls on March 8 of each year.

According to the National Women’s History website, it honored the one-year anniversary of the garment worker’s strikes in New York that had taken place a year earlier, when thousands of women marched for economic rights through lower Manhattan to Union Square.

Feminist activists in the U.S. took issue with how the history books left out the story or contributions of women in America. One group set about revising the school curriculum in Sonoma County, California, according to the National Women’s History Project. Thus the idea to create a “Women’s History Week” in 1978.

Kayla, a senior at Mercy, says that her five sisters and her mother inspired her.

“I’m half Native American and half French. My family and I grew up in a small town with only about 300 people. They were very prejudiced and tried to make up their own definitions of what a Native American is. It inspires me that throughout all of that, my mother always stood strong and she’s still brave.”

Women’s History Month had its origins as a national celebration in 1981 when Congress passed Publication L. 97-28 which allowed and requested President Ronald Reagan to proclaim the week beginning March 7, 1982, as “Women’s History Week.”

During the next five years, Congress continued to pass joint resolutions designating a week in March as “Women’s History Week.”

A sophomore at Mercy says that Rihanna inspires her because of the way she carries herself. “She doesn’t need anyone but herself.”

“There are so many women who are inspiring to me, in the world now, from history and even younger generations,” Tiana Ortiz, a Bronx local stated.

“One woman who inspires me is a coworker of mine. She has survived through traumatic life experiences and is now living a life that she chooses. Her independence, dedication and resilience are something that motivates me to go after the things I want in my life when I’m feeling weak or incapable.”

“The most inspiring women are those who inspire positive change in myself and others,” Ortiz added.

Between 1988 and 1994, Congress passed additional resolutions to proclaim March of each year as Women’s History Month.

Since 1995, Presidents Bill Clinton, George Bush and Barack Obama have issued a series of annual proclamations designating the month of March as “Women’s History Month.”

Adilene Santiago also says that her mother inspires her. “She migrated all the way from Mexico to America to better our lives,” Santiago said.

“Any mother can be an inspiration. They’re always supportive and always look to be and well for their kids,” another student added.

“Someone who inspires me is the Queen of England, Queen Elizabeth.  At a time when women were seen as mere objects of the patriarchy, she broke social norms and single-handedly turned England into the greatest empire on earth,” Ashley Narine, a a student stated.

Another picked a modern female.

“Women of color were raised to be strong and independent, and I believe that Michelle Obama is those things. Even when Obama was President she stood by him and supported him but made something of herself.”