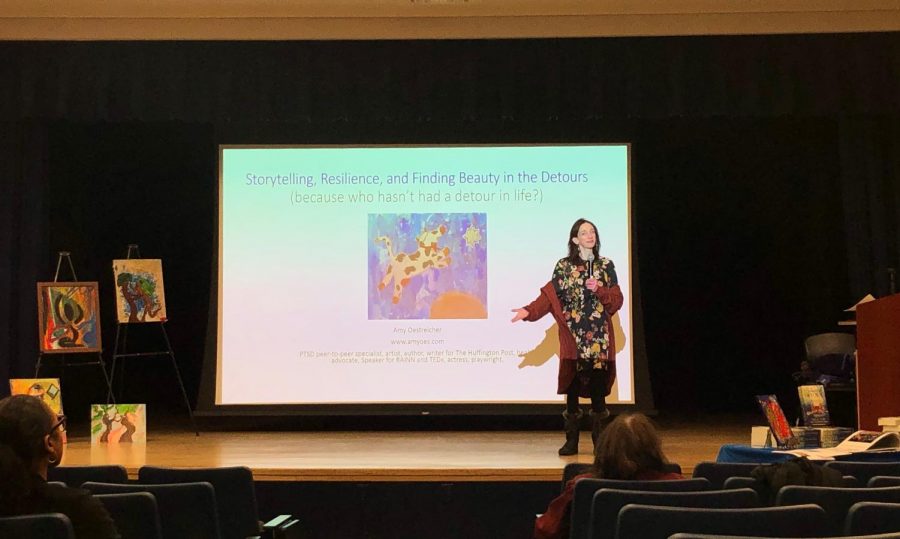 Post-Traumatic Stress Disorder speaker Amy Oestreicher may be the strongest of them all.

On March 3, Mercy College had a speaker come and talk to students about mental health and PTSD.

Oestreicher is a 32-year-old who came to Mercy to share her personal experience surviving 10 years of medical problems, sexual abuse, and PTSD.

Oestreicher has achieved many accomplishments since her surgeries and sexual abuse. She has done three TEDTalks, and she is now a PTSD specialist.

Oestreicher is a nominated Audie author, a global speaker for RAINN which is the Rape, Abuse, and Incest National Network, and an award-winning actress and playwright.

She also is the founder of Love My Detour which is a detourist program that teaches people about the basics of mental health, coping skills, storytelling and support systems, and living with a visible and invisible illness.

Oestreicher’s story begins at 17-years-old, when she spent her graduation in the ICU. She was very interested in musical theater and planned on studying it while in college. Oestreicher began taking voice lessons and at one point her mentor sexually abused her, but she didn’t exactly know what was happening.

She finally figured out what was happening to her when she went to Barnes and Noble and saw a workbook by Laura Davis called “The Courage to Heal.”

While completing this workbook she had felt the need to heal, but she thought things like this don’t happen to females in Connecticut.

“People weren’t talking about this in 2005,” Oestreicher said while speaking on her sexual abuse experience.

She finally got the courage to speak to her mother about it during her senior year and she asked, “What do we do?”

What made her have 30 surgeries was a blood clot she found out she had. The blood clot led to an explosion in her stomach.

“I went from acceptance letters to the ICU,” Oestreicher said.

Oestreicher began having little hope for her college career as others told her she wasn’t at the college point anymore. She kept getting negative news after she awoke from her coma.

“The doctors told me I didn’t have a stomach anymore, and they didn’t know how long it’d take for me to eat again,” she said.

For years, Oestreicher heard “don’t eat or drink because it’ll kill you” from doctors, but she had to fight her urge of hunger, which was all mental.

Oestreicher began a chocolate business so she could at least create with food, she cooked, and she was in a musical.

During the musical when she had water breaks, she just had to sit there because she couldn’t drink water. 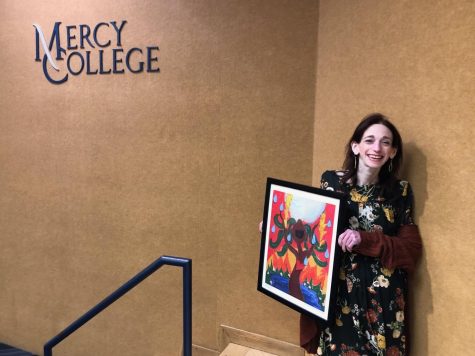 At 21-years-old, Oestreicher went to Yale for a 19-hour surgery which would make her a digestive system. Oestreicher felt alive and normal again until a week after the wound exploded while she was in California.

Her biggest question that she kept bringing up was, “How did your detour lead you to where you are now?”

This was the lesson she was teaching. Her detour led her to the activities she found now that she loves. Oestreicher paints and makes art — it saved her from running into a wall.

One particular painting she did was the Singing Tree, and it was made at the worst point of her life.

While she also didn’t have a stomach, she did a one-woman story in 2012 named Gutless and Grateful the Musical.

“I lost a stomach and gained a story,” Oestreicher said.

An audience member asked if she ever pressed charges on her past voice teacher.

“My parents took me to a lawyer, but the lawyer said to them that the court would eat her apart since she was right out of the hospital,” Oestreicher answered.

She started college at 25-years-old, graduated at 30-years-old, and is now in graduate school. She now gives tips to college kids and adults. She also has helped to work with students to tell their own stories whether it be to a journal, themselves, or the public.

“There is no one way to heal from anything.”