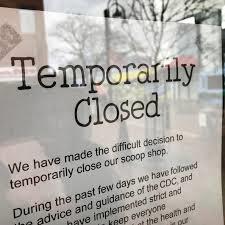 The coronavirus may have changed the world permanently, as Americans prepare for what might be a financial crisis that will take years to battle back from.

Many companies are being forced to temporarily close down due to the coronavirus outbreak.

U.S. companies have already announced that there have been more than 700,00 job cuts in March as a result of COVID-19, according to TD Economics. The unemployment rate soared to 4.4 percent, a high that was hit in August of 2017, said the Labor Department. Prior, the rate of 3.5 was a fifty year low mark for unemployment. Nearly 10 million Americans have been laid off or furloughed and have applied for unemployment.

Many utilities, telecommunications companies and automakers are easing shutoffs and waiving late fees to accommodate customers who might be struggling during the coronavirus pandemic.

Companies like Comcast, PG&E, AT&T, Hyundai and Duke Energy are among the businesses giving people a break, in one way or another.

With repercussions from the outbreak including job cuts, furloughs and business closings, credit card companies are preparing for some cardholders to have problems paying their monthly bills.

The travel industry and restaurants are expected to be especially hard-hit as people are asked by health officials to stay at home for weeks.

Although some companies are willing to give their customers a break, other companies seem to be handling the pandemic a little differently. Companies like Sprint, T-Moblie Con Edison, and Optimum are offering a 30 day extension to all consumers, but the bills are still generated normally.

Many Americans are upset that they still have to pay their bills despite the fact that there isn’t work at the moment.

Landlords are still asking for their monthly rent though they can not evict tenants if the rent isn’t paid.

Samantha Ramos, a 21-year-old Bronx local and a mother, has been out of work for several weeks.

Ramos stated that she was used to the routine of getting up for work everyday and since the temporary closure, everything just feels so off to her.

“Being out of work is just a huge inconvenience for me, especially being a mom, not having any income coming in puts a hold on so much that I literally can’t afford to be put on hold,” Ramos stated.

“Unemployment insurance can only help so much,” Ramos added.

During the Great Recession, the unemployment insurance was up to 661,000. The coronavirus peak is set to be more than triple that number.

President Donald Trump signed a a $2 trillion coronavirus relief package into law, which will provide free COVID-19 testing and expand paid leave and unemployment insurance to Americans impacted by the pandemic.

Ramos believes that that isn’t enough and that some companies should do more to help their employers.

“I feel like some companies are doing what’s best for their employers while other companies aren’t being genuine about how this pandemic is negatively impacting a lot of people” Ramos stated.

Ramos believes that companies can help keep some of their employees employed by offering work from home alternatives.Ramos stated that although the president is trying, she believes he can do more than he’s doing.

“I believe the president isn’t doing all that he can, yes he’s trying but he should think of everyone that is impacted by this,” Ramos stated.

Ramos believes that the president can help by finding new income alternatives to help Americans who were negatively impacted by the pandemic.

“Some people aren’t even laid-off; hours are getting cut short so it’s less people working at the same time which means less money being made for them to maintain their living,” Ramos stated.

“It’s even worse for companies, a lot of money is being lost in businesses.”

Even with expanded benefits given, many people are unsure if they qualify for unemployment, especially if they left jobs because they worried about their exposure to COVID-19.

Victoria Lynn, a 26 year old mother in the Bronx, took a day off from her cashier job in Dollar Tree and was never called back into work. “I don’t even know if I was fired or not, they didn’t say. They just never called me to come in. It’s frustrating, I’m not sure if I’m able to file for unemployment because the store isn’t closed and I’m technically still ‘employed’.”