Senior, Tarique Robinson, proposed the idea of making a difference by funding students with "First Choice." 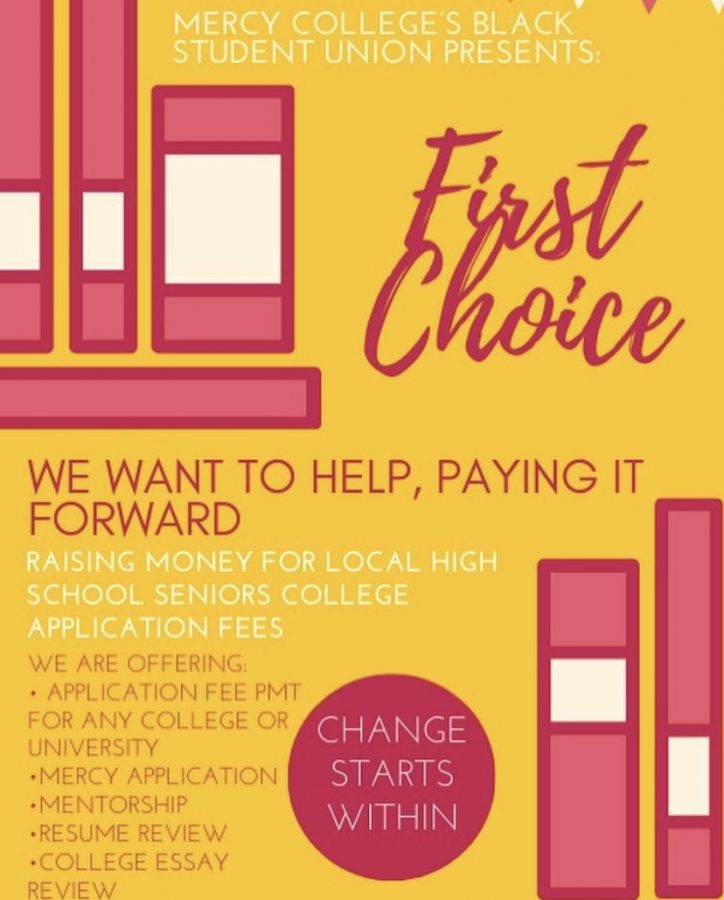 High school seniors envision themselves attending the college or university of their dreams. These seniors work hard to succeed academically to apply or receive scholarships from colleges. Many of these students want their first choice dream college, which gives them the opportunity to be a part of an incredible program of their interest that offers them great benefits. However, application fees for any college or university make it harder for students to apply. Students may have financial issues and are not able to afford the application fees.

Co-vice President Tarique Robinson of the Black Student Union was a senior four years ago at Amityville Memorial High School. He was a hard-working student who had plans to attend his first choice dream college at the time.

“The University of Southern California was a dream since I was little, I had to go there. But when I saw the application fee, I knew it was impossible. It was too much,” says Robinson.

At the time, Robinson was not able to pay for his first choice.” He went on to applying for other colleges that he was able to afford. But, the feeling of not trying to see if he would be accepted or not got to him. Robinson presented BSU members with the “First Choice” proposal. After talking it over, Robinson took initiative to reach out to his old high school to speak on the idea of ‘First Choice’. He wanted to make a difference for the future of many high school seniors, give them an opportunity that he did not have. Fliers were later distributed at the high school. Reynold Hawkins reached out to Robinson leading to the beginning of the process of “First Choice.”

“Whatever your first choice college is, we will fundraise it. We are doing more for these students, we will be helping read college essays and give these students the insight on how College is,” says Robinson.

Robinson came forward to his peers in BSU with the idea and together figuring a plan on how to fundraise the money for the senior students. They decided to bake goods for their bake sales. Their last two bake sales raised $262 dollars. Robinson and his team had planned on two upcoming fundraisers during the semester to raise more for “First Choice.” Robinson has advertised many bake sale fliers throughout the Mercy campus. As each student approached to the table he explained the purpose of his plans. This is an act of generosity of BSU students helping high school seniors’ afford the application fees for their first choice is remarkable, believe his peers. Not only BSU but, all the Mercy students who contributed in buying the bake goods. Robinson has dedicated his time to find the sufficient resources and support from his peers at BSU.

Majority of the students who participate in BSU at Mercy College understand the frustration of not getting a chance to apply to their first choice due to financial help. Application fees range from $50 to $120. Several high school students in the past and even today tried to stay away from “pricey” application fees. BSU students understand Robinson’s story when they were a senior in high school. It is also self-accomplishment knowing one has tried his/her best and proving the ones who doubted them in the past.

“When I was in high school, I did not get that importance of applying to a dream college. They didn’t push me. When Robinson proposed the idea I thought it was a topic thrown out there, but I knew where he was trying to go. It was a great idea. We were giving it importance to these students,” says Atalya Brown.

There was so much support and these students understood the value of maturity and generosity. The BSU students always gets involved throughout the school with other organizations and outside faculty. From helping the community prepare sandwiches with another organization, Subway Run, to making a difference by mentoring high school seniors’ and help afford the ‘First Choice’. Darnell Hargett is another member of BSU who supported Robinson with the idea.

“It was a great way to utilize the skills we’ve acquired in college and helping those who were once in our position. Tarique was so genuine and whole heartedly that there was no way I couldn’t’ be all hands on”. Says Hargett.

Robinson’s idea impacted many of his peers and without hesitation knew it was the best thing to do. This is an act of generosity and the excitement of moving forward in the upcoming years was more than big for BSU.

“It’s a warm feeling to know a small act of ours can go a long way. What we’re doing is only a small piece of the puzzle, the mission is much bigger than us,” emphasized Hargett.

There were several events and plans set however, since the coronavirus pandemic, the plans are on a hold for the moment. BSU will resume the process of ‘First choice’ in the fall. Many BSU seniors will be graduating in May but will come back and help. Now there’s more meaning to it, the act of loyalty to come back and help the new president move forward with the plans of generosity, ‘First Choice’.

“Corona is now. Corona isn’t forever. Once this pandemic is over we will pick up where we left off accommodations will be made because the show must go on. “First Choice” is an act of the future,” concludes Hargett.

This act of generosity will continue for the fall and for the future. The start of a small act gives the warmest feelings to peers and these high school students. Therefore, working together to make a difference and telling others they are not alone, there are people out there willing to help.