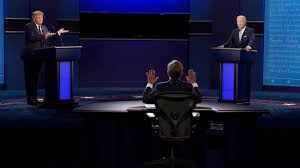 Many people in America have panned the first debate between President Donald J. Trump and former Vice President Joe Biden as a complete disaster and the worst debate in history.

During the debate, Trump addressed the New York Times report on his taxes, he offered a simple defense for the low amount of income taxes he’s paid over the years and insisted that he pays millions of dollars in taxes.

Both candidates spoke on their opinions of the COVID-19 crisis and what they plan on doing to put an end to it if elected. Biden stated that Trump has no plan, while Trump insisted that Biden could not have done the job he has done thus far.

Trump also brought up his administration’s plan to quickly distribute a coronavirus vaccine, but Biden questioned why Americans should trust someone who he believes lies so frequently.

Another issue pointed out during the debate was the topic of white supremacy. When asked, Trump didn’t scold white supremacists for the violence at anti-police brutality demonstrations across the country, but he stated he’s willing to help end the violence.

“Sure, I’m willing to tell them to stand down, but I would say almost everything I see is from the left wing, not from the right wing. I’m willing to do anything. I want to see peace,” Trump said.

Many experts believe Trump is trialing, so it was a much-welcomed chance to shake up a race in which he is currently behind. For Biden, the debate was a necessary step with risky results. .

Members of the Mercy community gave their opinions of the debate and the candidates.

Jade Snyder, Assistant Professor of Communication Studies, stated that she felt like neither candidate answered the questions clearly, which left her and her son confused.

“I think that it was astounding to see two potential presidents act that way. It seemed to be men acting like children,” Snyder stated. “I didn’t hear anything that made me feel good about the upcoming election.”

Snyder believes that the country has been polarized by the two main candidates, which has caused a mindset such as, if one votes for Biden, they are giving away their freedom and that it’s the end of the great America as people know it. Whereas, the opposing side claims if one votes for Trump, it’s the end of human decency and democracy as people know it.

“Those two polarizations make it hard to predict where we stand as a country if either one is elected,” Snyder said.

Snyder said that the only issue that can be predicted is, when one candidate wins, emotional conflict may be expressed, and people will grow angry.

“If one side doesn’t win, I’m concerned that people will become angry and some of that anger will be taken to the streets and turn into violence, regardless of who wins,” Snyder said. “I feel that that conflict has come embodied in some people who have already chosen a side, whereas there are a lot of people who are in the middle and we’ve all been made to pick a side and more is on the line than ever before.”

Synder believes that Biden’s argument seemed to be more valuable and that he contained his responses a bit more level-headedly than Trump, but when the personal attacks started happening, it seemed like a triggering event for Biden.

“I hope that they can control themselves because those personal attacks don’t make sense. I=It has no business in politics in my opinion,” she said. “I wish there was another option, it seems like our president puts himself first a lot, and he talks a lot of talk, but whenever it comes down to it, somehow the topic goes back to revolving around him.”

Snyder believes that though Biden attempted to focus on the external and what the needs of the people are, it seemed that once he got riled up, the debate went south.

“I don’t feel one way or the other, I’m not sure that either of them actually has a plan because we didn’t get to hear. I can’t form an opinion if I don’t even know what their platforms are.”

Snyder stated that, in her opinion, no candidate won this debate. Not only did Biden and Trump lose, but the American people lost too.

“I have never seen anything like it. It was just a completely bizarre, very different, debate. It just went sideways. I don’t think anybody benefited from that discussion, we were all left confused.”

Mercy alumna, Amanda Ramos, stated that the debate did not feel like a presidential debate.

“I believe it was a mess, honestly. They were being very rude to one another and did not address certain issues, and the name-calling and bringing up each others’ children was unnecessary.”

Ramos stated that she is also stuck on the choice for president.

“After the riots we saw on television, I don’t think America is going in the right direction. Also, COVID is a new challenge beyond our control and I don’t know if either one of them is able to make any change at this time.”

Despite Ramos’s opinion on both candidates, she believes Trump won the debate because he stood firm on delivering his message, while Biden let Trump get to him.

“Both need to be more professional and less childish with one another just because it’s our country that’s on the line.”