Young Americans Fear Election Results, Not Pleased With Either Candidate

If one point is true about what the current Presidential election has done, it’s that it has put the United States of America through a period of civil unrest.

People have accused the media of pushing out propaganda, fake news, and partial truths over the past few months. Ordinary citizens claim to believe only certain outlets and try to figure out the truth for themselves.

As one of the most critical elections ends, many struggled with deciding whether to vote for President Donald J. Trump or former Vice President Joe Biden. Young voters who still live under their parents’ rules are unsure if they should think for themselves or for the brains that created them, but one aspect is for sure: there has been a record turnout of young voters. Though they are still exercising that right, many are afraid and left to wonder about their beloved country’s future.

“I feel super drained and weary about the election. It has created an immense amount of stress, ignorance, and hatred that is constantly so much to take in. Mentally, I am so concerned and feel I am a vulnerable community target if Trump is re-elected. Although I will be voting for Biden, I am scared for the outcome of his presidency as well,” stated Mercy College junior, Adrianna Vanmelis.

She is frightful of what the results will be, not only because of the national divide that the country has been suffering, but because of the vicious crimes that could potentially be committed no matter who wins.

“I will also be nervous about the coronavirus’s long-term effects, how it’s handled, and the economic situation,” she said. “I am worried about my career after school and if I’ll be able to find a good job based on how the economy is currently.”

Many college students’ feelings have a similar pattern of fear interlaced with them. Despite what the media may be saying, many people are uncomfortable with th 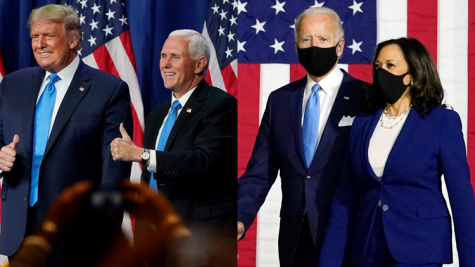 Young voters have seemingly strong opinions of Trump and even the usually-quiet Vice President Mike Pence. Though a lot of them don’t necessarily stand by Biden either, they feel that a vote for him will at the very least take away their worry of having Trump as their president for four more years.

This election won’t only decide who the new president is, but the Vice President as well. Pence and Senator Kamala Harris have caused a separate degree of discomfort within young Americans.

Vanmelis stated: “I think Kamala is very stuck in her beliefs, which worries me, but I also think she could bring some fresh ideas to the table, and the fact that she’s a black female would make huge strides in office.”

“I love Kamala Harris because I see her as a role model for women of color and she symbolizes legal reform for this community. I feel like she changed as a person once she became educated on what some of the issues are with the prison system, and she’s trying to correct these mistakes on a national level.”

Griffin was just as outspoken and honest about her views of Pence.

“I feel like Mike Pence is just a super religious version of Trump. I don’t think he’s a good person – I believe he’s manipulative and plays on his own Christian values to make Trump look like he cares about God.”

“Although I do not like Trump, I do not wish for him to be impeached, as I feel Mike Pence is just as much, if not more, racist, misogynistic, and anti-LGBTQ as Trump and has no remorse for people struggling in society.”

The safety of young adults in this country, especially young black-Americans, has been in jeopardy since the election really took off and both candidates began their presidential campaigns.

Threats toward the black community and promise of civil unrest and civil war have been circulating through social media as the results grow closer and closer to being called.

“I could never feel safe in a country where Trump is going to be the president again. I know America will become a place that is not safe for minorities and living here would be a risk to my family’s and my safety – like black-Americans,” stated Griffin.

She feels that if given the chance to convince people to vote for Biden over Trump, she would take the time to educate them on what it really means to be president. She would stress the importance of choosing a candidate who would put the country and the people before himself. She believes that Trump does the opposite of what he should by holding himself to a higher regard than the American people. One thing in particular that stood out to Griffin is Trump’s alleged stalling of stimulus checks until after the election.

Ultimately, everyone is entitled to vote for whoever they feel is the best candidate. As Americans, that is our natural-born right, whether black, white, woman, or man. Many do not need convincing when it comes to making their choice, but others truly don’t have a clue who to vote for. Some will choose not to vote and their voices won’t be heard, while others will jump to take advantage of the opportunity.