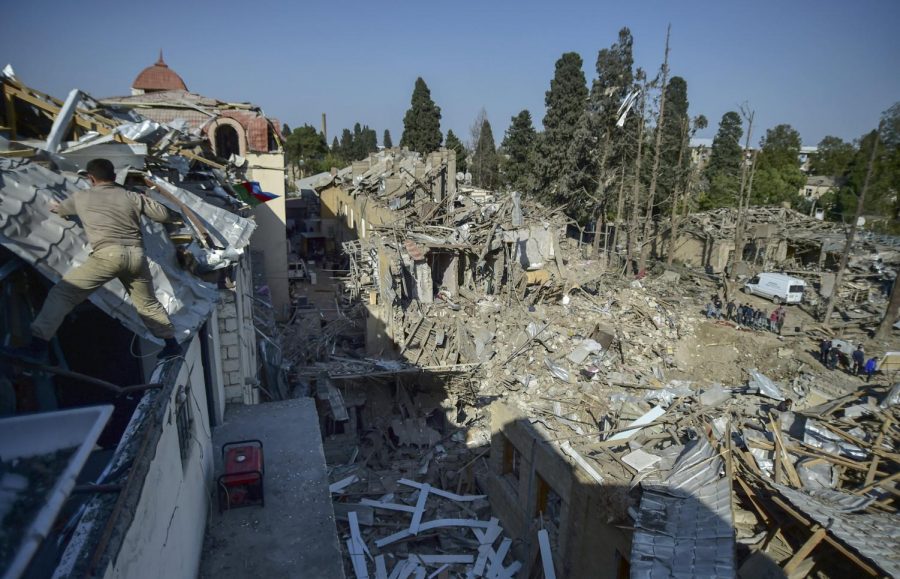 Since the Nov. 9 ceasefire agreement between Armenia and Azerbaijan, tensions remain high as both sides accuse each other of violating the agreement.

The conflict broke out on Sept. 27 when Azerbaijan forces began bombing the Nagorno-Karabakh region, which is under Armenian control. Armenia has controlled the region since a 1994 ceasefire between the same nations following a war caused by the breakup of the Soviet Union.

The 43-day long conflict saw Azerbaijan take the Nagorno-Karabakh region, which legally is internationally recognized as part of their nation despite the large ethnic Armenian population which resides there.

In a video conference on Oct. 23 hosted by the Institute for the Study of Human Rights at Columbia University, the Armenian Ambassador to the United States, Varuzhan Nersesyan, said the “combined aggression of Azerbaijan, Turkey and Jihadist launched a premeditated, well prepared, calculated attack,” on the region.

The Director of Peace-Building and Human Rights at Columbia University, David Phillips, stated,  “We’ve been warning about another Armenian Genocide. We’ve been monitoring recent development and trends which has raised our concerns.”

These concerns according to the panelist in the video conference stem from the long-standing animosity between Armenia and its surrounding neighbors.

Armenia is situated in the Caucasus between Asia and Europe. It is a majority Christian nation surrounded by majority Muslim nations, which have caused major ethnic issues in the region before and after the breakup of the Soviet Union in the region.

Genocide is a term, according to Nersesyan, which is familiar to Armenia due to the Armenian Genocide, which took place during the First World War. This genocide carried out by the Ottoman Empire, which today is modern-day Turkey, resulted in approximately the deaths of up to one million ethnic Armenians.

Currently, Turkey and Azerbaijan are the only two nations that deny the Armenian Genocide was a real genocide.

The co-chair of the Armenian Assembly of America and expert on US-Armenia Political Relations, Van Krikorian, displayed a map during the video conference outlining the geographical and political situation for the conflict.

The Nagorno-Karabakh region is made up of mostly ethnic Armenia although legally the land belongs to Azerbaijan. The region was once a part of Armenia before conflicts caused Armenia to be reduced to its current size which is 1/10 the size of historic Armenia.

The region under Soviet Occupation during the Cold War was an autonomous zone in the Republic of Azerbaijan voted to reunify with Armenia. This led to the initial conflict in the early 1990s, which led to Armenia regaining control of the region and uniting the ethnic Armenians there under Armenia.

Since the ceasefire in 1994, which according to Krikorian, “froze the conflict,” both sides have heavily militarized the border. However, modern weapons such as drones supplied by Turkey to Azerbaijan and Jihadist forces outmatched the Armenian defenses, according to all of the speakers.

The conflict finally ended when Russia negotiated a peace deal between the sides which many in Armenia, according to Armenian news outlets, considered a surrender.

Azerbaijan is allowed to keep the land seized in the invasion which is populated largely by ethnic Armenians. Russian and Turkish peacekeeping forces will be allowed to enter the region to help stabilize it.

Finally, and perhaps most concerning to the Institute on Human Rights, is a road will be built through Armenia to connect Turkey to Azerbaijan which is currently divided by the nation of Armenia.

This deal saw a massive protest in Armenia and called for the Prime Minister of Armenia Nikol Pashinyan to resign.

It has also raised concern for the Institute on the Study of Human Rights, as now Azerbaijan will control the land where Armenians live and work, where the group responsible for overseeing the peace is a nation that carried out genocide against Armenian.

Phillips, since the video conference, has written extensively to highlight the issues surrounding the Armenian people in Nagorno-Karabakh, who he feels are in extreme danger.

He also wrote specifically on how Azerbaijan is using social media and other forms of mass media to spread disinformation surrounding the crisis.