Mercy Is Officially a Meme

Memes have become an internet sensation over the years and it’s officially Mercy’s time to shine as a meme.

Mercy College officially has its own meme page.

@Mercycollege.memes is an Instagram account run by an unidentified student, it is completely unofficial and not tied to the school directly but it does punch jabs at certain situations at Mercy.

The upperclassman student referred to as “Leslie” wishes to keep his or her name anonymous.

A meme is defined as  “an idea, behavior, or style that becomes a fad and spreads by means of imitation from person to person within a culture and often carries symbolic meaning representing a particular phenomenon or theme.”

Leslie ran a meme account for their high school, it did well for them so they decided to make one for Mercy.

They are very familiar with photoshop and adobe premier and just felt like using their skills.

The account covers current topics going on, whether it’s issues with Mercy itself or just broad topics in general, the account covers everything. Students send in topics as well that they would like to see as a meme.

“I’ll only accept the idea if it feels suitable for the account, most are my own ideas though,” Leslie said. 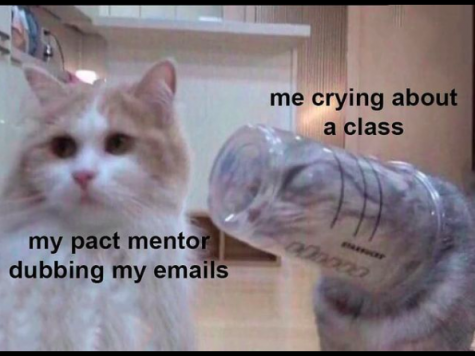 Memes range from popular meme templates or ideas that come to them. Leslie also gets ideas by thinking about struggles they personally have with Mercy. This includes the food, financial aid, and how the school is treated during the snow.

The account pokes fun at administration, professors, campus safety, PACT, and students, so no one is left out of being mocked.

The page envisions the struggles of a student but in a very light-hearted way. Mercy staff members do know about the account but no one has said anything directly to Leslie asking them to take it down.

Memes have become very popular on the internet and some big social media accounts rely on memes only. There are accounts on Instagram like memedaddy, trashcanpaul, and literallyeverymeme that have thousands of followers and all they do is share memes.

Memes were created in 1976, believe it or not. The first meme appeared in the book “The Selfish Gene” by Richard Dawkins. In this book, the meme was an attempt to understand why some behaviors seemed to make no sense but were found to very common in human societies. Dawkins coined the word “meme” from the Greek word mimeme, which means to imitate.

The first iconic meme on the internet was Baby Cha-Cha-Cha. The baby was made in 1996 and in 1998 CNN described it as a meme.

We see imitation a lot with memes currently on the internet. There are all different forms of memes from one of the same meme templates. Students picked up on the memes and imitated them and made them their own for their schools.

These accounts became big within the past couple of years and a bunch of schools followed suit and made meme pages for the colleges. Manhattan College has manhattancollegememes with 1,367 followers, Penn State has pennstate_memes with 1,061 followers and many others. While these accounts don’t have a large following, they do rack up likes quickly.

Memes are something the internet will never get rid of. They will forever be a piece of history when we think of the internet when this generation grows older and something we will look back and laugh at, just like the comic section in the newspaper.