The Russian Invasion Of Ukraine Exposes The Depths Of Corruption, Says Mercy Panel 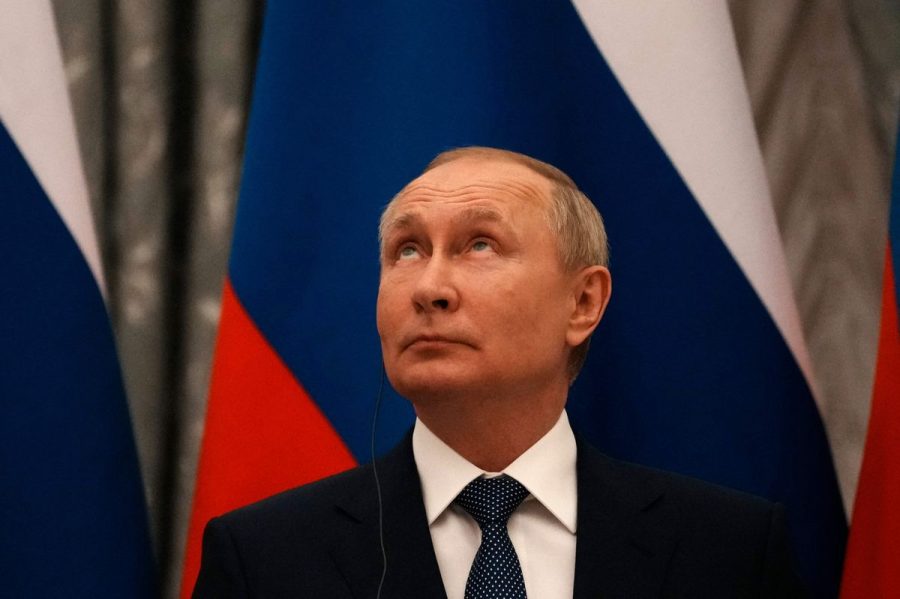 When the invasion of Ukraine was announced on Feb. 24, 2022, at 10:30 a.m., journalist Frank Brown was in his apartment in Washington D.C. watching Russian president Vladimir Putin speak from his office in Moscow. While he did not know what the invasion would turn into, he knew that starting now, democracy as we knew it would change forever.

This was it, he thought.

His wife, who is half Russian and half Kazakhstani, immediately began crying in the other room as Putin continued his announcement on live TV. She understood that to be Russian was something she could not be proud of anymore. She would have to live the rest of her life dealing with the divisions that will come from her family back home and the nation she was born in.

To understand the ongoing invasion of Ukraine, it important to lay out the background of how this began to take place, according to Forrat.

Long before the millions of dollars raised and billions of dollars worth of weapons were sent over Ukraine, the tension between Russia and Ukraine goes back decades with has left many in the two countries divided on much and unity on extraordinarily little.

Up until the fall of the Soviet Union, the majority of Ukraine was a part of the Russian Soviet Republic. Since declaring independence on Dec. 1, 1991, Ukraine has had one of the largest populations of Russian born citizens. Three years later, contracts were signed between the two countries with the agreement that Ukraine would send all their nuclear weapons held during the Cold War to the Russian Federation known as the Budapest Memorandum. The significance of this was large as Ukraine would thus lose their nuclear power as they were previously the world’s third-largest nuclear stockpile.

As time went on, tensions between the two nations began to mount. The 2004 presidential election between western favored candidate Viktor Yushchenko and Russian supported Canidate Viktor Yanukovych created controversy between the two nations as Yanukovych won but further divided the nationals both internally and between the two as it was widely seen as fixed. Many took the street to protest the election by wearing orange, which was Yushchenko’s campaign color and shortly after, with the help of a forced re-vote, Yushchenko the declared the new winner, much to Russia’s displeasure.

The 2008 opposition from Russia of the ongoing debate on if Ukraine was going to join NATO and the 2014 Russian invasion of Ukraine where they took control over Crimea, a piece of Ukrainian land holding a mostly ethnic Russian population created worldwide backlash towards Russia.

The 2014 invasion changed a lot of the people in Ukraine, says Forrat.

“Russia and Ukraine have been divided way before the current invasion,” says Forrat. “There were many that believed we should develop deep connections with Russia opposed to Europe and many they believed the opposite.”

However, Forrat notes that since the seize of Crimea, the mindsets of the Ukranian people have changed and became more united because of the ongoing developments of the Russian invasions. The risk of Ukraine joining NATO and conforming to the Western way of thinking are Putin’s primary driving forces for the ongoing 2022 invasion.

The worldwide response to the invasion has been powerful with many countries including the United States and Germany opposing Russia’s invasion and has sent collectively billions of dollars of equipment to the invaded country to defend off Russian military. However, the belief that many Russians are supporting the invasion might not be factual, according to Forrat.

“People tend to agree with the idea of belief other than reality,” says Forrat. “Most of these surveys have been conducted in the first week [of the invasion] rather than the second, then at the third an increasing number of people are afraid to answer. Many are afraid to say anything that goes against the Russian political line.”

For many Russians who have spoken out against the invasion in the country, they have found themselves either imprisoned or faced with fines.

However, many countries, such as the United States, have had their own protests against the war, one of which were placing sanctions against the Russian government causing them to have a significant financial blow to their government. Unlike many countries, Russia relies heavily on their natural resources such as gas and oil, which makes up 45 percent of the countries national budget. However, more than half of Russian wealth is held offshore.

While the current sanctions are proving to be a step in the right direction to the deterring Putin, Dr. Melnykovska states that the next strategies will affected Russian business.

“What is likely to happen is exit strategy” says Dr. Melnykovska. “Russian businesses would be set to leave Russia and have partnerships with China and Japan and rally around the flag of Russian oligarchs to demonstrate loyalty to Crimea and Putin against foreign sanctions”

In addition to exit strategy, Melnykovska predicts that long term sanctions will have elites change foreign policy and will have Crimea shared with Russia and their alliances will shrink.

Economic problems within Russia has caused Putin’s favorability to decrease over the years. The outside view of Russian patriotic and favoritism is also a stereotype that is not particularly true.

While it is true that there are many in Russia who fully agree with the political positions Putin has taken up, there is a generational gap in the country, and it has become clearer amidst the war as much of the younger generation are more against the war then the older, more conservative generation. Families get divided because of it.

Anti-war resistance is a growing in Russia yet is especially dangerous in the often-closed country of Russia. Many who have decided to protest various laws and norms in the past have been imprisoned, exiled, and placed on house arrest.

The increasing resistance has been spread mostly through telegram channels with the feminists’ groups making up the majority of the protesters. Podcasts by feminists in Russia has garnered tens and thousands of subscribers and have used their popularity to form flash mobs, one of which were held in different public places within large Russian cities where women were dressed in black and held a white flower. The majority were arrested for their protest.

However, while the resistance is growing, most of the Russian population are still surrounded by Russian news often propaganda which affects how they think and make decisions according to Dr. Forrat.

“They [Russians] often tend to take the side of the government and believe the Russian propaganda” says Forrat. “It is not much that Russian people think this is the reality, but they undermine that a truth that exists. There is no way for you to figure out what the truth is as both sides are trying to push a narrative to you, so you tend to side with what your country is saying because you do not know what to believe.”

Dr. Frank Brown, who has lived in Russia and has been traveling back and forth from Ukraine for the past 25 years has seen firsthand, has seen the division between the two countries before the Crimea invasion took place.

It reminded him of the Chechen War that took place in 1999, with the early crisis of the bombings to apartment buildings in Moscow. It later was speculated in following days that Russia themselves bombed the apartments to purposely start war.

“I remember speaking to some soldiers on the Russian side and hearing their stories,” says Brown. “They looked like zombies… I felt my view of humanity changing.”

The threat that Russia has imposed on humanity has only increased over the years and with the invasion of Ukraine, that threat has increased even more, especially with the internal division within the Russian people.

Division within a nation has been a trend on the other side of the Atlantic in North America. The Jan. 6, 2020, attempted Capitol Hill seize in the United States and the Freedom Convoy protests in Canada in 2022 has been hot topics in the discussions of how a nation can be divided. However, as the speakers point out, protesting in North America is vastly different than the protests going on in Russia.

“If you show up to Russia holding up a blank paper in the city square, you can be imprisoned for 15 years,” says Brown. “I’ve known people who have been poisoned, jailed, and lost their jobs [from protesting].”

“In the U.S., the challenge of voicing your opinion is most risky when you’re in an environment that is not your own. In Russia, we do not see a divided country. The country is too united. The challenge is to break the unity,” says Forrat. “Russian identity is connected to great power. Every Russian including myself was raised like that. We do not want to face the dark sides of our country’s history… it’s not in the books. You cannot compare Russian and Canadian protests when you include deaths and jail.”

The ongoing invasion in Ukraine has brought many together, but has also isolated many in the process. In the United States alone, there have been an increase of racism to Russian citizens and vandilism to Russian owned businesses. Emotions are high on both sides, but one thing that is undeniable, is that the world we are living in is changing drastically and democracy is on the line for everyone whether they are fighting in the war or watching it on TV.

For the United States, there has been a mixture of praise for the help they have given to Ukraine but frustration of the things they refuse to give, one of which is the refusal to bring their own soldiers to Ukraine directly. However, as Brown points out, a degree of restraint is required when it comes to nuclear power and the unfortunate cost of that has been Ukrainian death.