OP/ED: I’ll Say What I Want 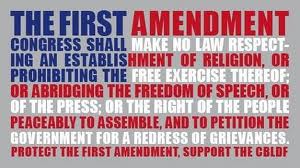 What is freedom of speech?

It is my right to express how much I think you are a total piece of filth.

It is my right to express that I believe a person of Christian or Jewish faith has it wrong in their religious following.

Even still, it is my right if I am a white man to say that I feel a black man is inferior. Or as a man (non-race specific) say that a woman’s place is in the home taking care of the household and children.

If not, then what is the First Amendment for?

CONGRESS SHALL MAKE NO LAW RESPECTING AN ESTABLISHMENT OF RELIGION, OR PROHIBITING THE FREE EXERCISE THEREOF; OR ABRIDGING THE FREEDOM OF SPEECH, OR OF THE PRESS; OR THE RIGHT OF THE PEOPLE PEACEABLY TO ASSEMBLE, AND TO PETITION THE GOVERNMENT FOR A REDRESS OF GRIEVANCES.

Freedom of Speech, Press, Religion and Petition. The above text is the first of ten amendments to the Constitution, otherwise known as the Bill of Rights.

If I were to express my dislike of something and take a position on the matter, I take full responsibility for the fallout and negative feedback that I may receive for it. However, I should not be put to death or thrown in jail for my non-violent beliefs. It’s easy in this overtly politically correct society for the rights we have to be violated because we do not want to offend another individual or group.

So rather than freely let us express, some seek to suppress.

If you don’t like Chick-fil-A because the owners speak out against gay marriage, boycott them. Don’t firebomb their business or inflict personal harm to their family. Again, I believe that the responsibility of what comes out of your mouth is yours and yours alone. If you choose to express a controversial stance on a matter, unfortunately you have to deal with the radicals who oppose it.

But that is your right to make that choice.

My ranting thus far is irrelevant. This is not about my personal stances on any of the above mentioned things, but about the right to take one.

While I served in the military, I voluntarily took an oath to serve and protect the United States and obey the orders of those above me. I chose to dedicate said years of my life to honor that commitment. Does that mean that I had to like my superiors or agree with what I was told to do?

I was not a supporter of George Bush and never voted for him. I made no secret of my displeasure of his actions. But I also obeyed the orders given by him and Congress without question. Was it wrong of me to voice my opinion and within my rights to do so? Some would say no, because it could have negative consequences to unit cohesion. I understand that, because in a time of conflict or war, that would be one of the most damaging aspects of having a successful war mission.

However, just because I made the commitment to be part of the military, does not mean that I ceased to exist as an individual. There are of course actions such as being a conscientious objector, and arguing the whole military/First Amendment rights is a whole other subject deserving a separate rant…umm, I mean discussion. What I am here scribing to you is about our right to free speech as citizens of the United States.

In a letter recently written by Baltimore Ravens linebacker Brendon Ayanbadejo, he expressed his favor of a Maryland ballot initiative that would legalize gay marriage. In response, state delegate Emmet C. Burns Jr. wrote a letter that was published to team owner Steve Bisciotti asking him to “inhibit such expressions from your employee.”

Seriously Burns? You, a state representative in a country based on a constitution that has a First Amendment giving its citizens the right of free speech, should say such a thing? Sure you have the right to say what you want, but having the nerve to suggest a privately owned franchise “suppress” the words of a private citizen is not the kind of person that should be in office. Your job is not to take away or inhibit our freedoms – it is to protect them.

In a letter written in response to Burns, Minnesota Vikings punter Chris Kluwe wrote a letter peppered with very colorful words such as “lustful (expletive) monster” and “cluster(expletive).”

While it’s obvious that word choices used in the letter by Kluwe were obviously not meant to be read to children, his passion about the attitude of Burns is more poignant than his tools of delivery. He says in one section that the words written (by Burns) are “a vitriolic hatred and bigotry” and “make me ashamed and disgusted to think that you are in any way responsible for shaping policy at any level.”

As a journalist and a reader, I believe that we have the right to write or read about subjects that are as free from bias as humanly possible. I do not promote malicious intent or violence to anyone; however, we all have the opinion to express our beliefs and opinions regardless of the subject matter. If you don’t like what I have to say, here are a few suggestions:

Close the book, magazine, or newspaper or better yet, don’t buy it.

Don’t listen to my speech.

I stand up and applaud Kluwe for his response to Burns. Not because he just attacks Burns for what he believes are bigot minded statements, but because he addresses the fact that Burns, a public official, suggests that the First Amendment of speech be violated because someone has a different belief or opinion that migh be controversial or unpleasant for others to think about.

So now, about that abortion issue…