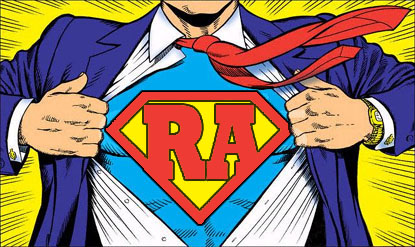 Not everyone is cut out for the job. It takes a loud, strong willed (and at times), strong stomached person. They need to have the ability to say no, and put on the “bitch face” and lay down the law, but at the end of the day, they can be your best friend.

RAs are not always the bad guys.

From the outside of the Residential Life office, as a normal student, the Resident Assistant is always seen as the bad guy. Especially when a student is written up, the RA is always the first to be cussed out or yelled at.

From the inside the office, they are just doing their jobs. Keeping the building and students safe is their number one priority. Then giving the residents someone to talk to and giving them events to go to, to make living away from home a little better, is the second most important part of their job. Enforcing the college policies and procedures, and providing educational programs and team building activities at the same time without residents hating them, isn’t the easiest thing to do.

Giving a student the responsibility of numerous other students is a huge role, and it seems like one of higher education’s greatest experiments, testing a young adult to take care of so many other young adults.

Most RAs come into the job with good intentions, but after coming into the office of Residential Life, they become employees of the institution and then don’t have the ability to disagree with the policies in their own personal way.

If the RA is a member of a tight-knit community, it makes it even harder for them to keep their personal life separate from their professional life. Creating a sense of community and trust can get difficult when they can’t separate the two. When it comes to writing students up for breaking the rules, and not following policies, it reflects negatively on them from the students’ perspective. On the administrative side, they recognize them for their accomplishments. Even though most RAs don’t agree with the policies that they enforce, they admit that it is their job so they have to enforce them.

From a student perspective, the RA can be a hassle, but in the end, some students realize that they are only doing their job. They are always portrayed as the “bad cop” and it isn’t always the case.

Policies are in effect for a reason and the RAs are there to enforce them. As someone who went from being a resident to an RA and back to being a resident, I know both worlds pretty well and I know how residents treat RAs.

Busting parties that have drinking involved or marijuana on a dry campus isn’t rare. It happens more than you think and the residents aren’t happy when it does happen. Obviously no one is happy when they get in trouble, but when the RA makes the student dump the alcohol down the drain, they aren’t happy either.

The alcohol that the students probably just bought is now down the drain, and the last thing they want to do is meet with the Resident Director, and the person in charge of judicials, usually resulting in a fine. The residents then hold grudges over the RAs because they wrote them up. Little do they know if they were just smart, or followed the rules in the first place, they wouldn’t be getting written up.

RAs are not always the bad guys, they are just doing their jobs. They are hired to enforce policies, and that is what they are doing, nothing less, nothing more. They enforce rules, and create a safe place for the rest of the residents to reside.