OP/ED: Sexual Consent Is Everything 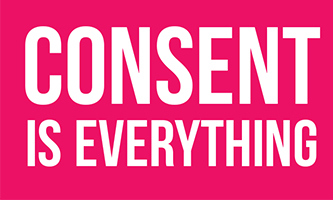 The laws of consent vary by state and by situation. Which can make the topic confusing, but you don’t have to be a legal expert to understand how consent plays out in real life.

The concept of consent is simple.

Yes means yes, and no means no.

Although this may seem easy to comprehend, people argue that there are other factors involved.

“Well, what was she wearing?”

Some people feel that if someone is acting a certain way, or wearing something provocative, that it suggests they want to have sex with anyone and that they are free game, even if they don’t verbally agree to it.

Unless a person verbally expresses to the other that they want to have sex, they are not giving consent.

There are other circumstances where the person may be drunk and give consent to having sex, but then later on when they’re in the right frame of mind they decide that’s not what they wanted.

When someone is under the influence of drugs or alcohol, they are physically unable to give consent, because in that current point of time they’re not in the right state of mind.

You can’t possibly expect anyone to rightfully agree to sex when they’re so drunk they can barely remember their name.

In an effort to help educate people about the rules of consent, Project Consent – a non-profit aimed at deconstructing rape culture, has released a series of short videos illustrating what sexual consent is, and what it isn’t.

“By promoting consent, we are reminding society that violations of someone’s agency should never be taken lightly. Rather than continuing to teach that the blame is on victims, we want it known that consent is always an established right, not a removable luxury,” said Sara Li, head of Project Consent.

Hopefully the nature of these videos has opened up an important dialogue.

So far, the response has been pretty great and many are starting to embrace and understand the idea of consent.

For example, on a recent episode of It’s Not You, It’s Men (a talk show starring Tyrese and Rev Run), Amber Rose fired back against the hosts’ slut-shaming views on consent.

Rose said she gets “sexually assaulted constantly” by people who think that her fame and public image make it okay to grope her without her consent.

Tyrese responded that he believes in “the comfortability some people find in wanting to touch or grope.” Rose is “an energy that is sent out there that creates that type of response.” He also compared people inappropriately touching Rose because of what she’s wearing to wanting to play basketball with someone because they’re wearing a basketball jersey.

Men, you’ve never been further off.

Rose was not having this at all. She shot back with with an excellent and straightforward explanation of what consent is.

Unconvinced, Rev Run responded with the typical comment – “Dress how you want to be addressed.”

Men, that is the easy way out of the conversation. Your logic is flawed, and your compassion is non-existent.

Rose shut this down quickly, explaining that even if you’re wearing a short skirt and tank top, drunk with your friends at the club, it does not mean you’re “DTF.”

She ended by saying she was not mad at Tyrese or Rev Run for their views, because “that’s how society raised all of us,” and that she herself is a “former slut-shamer.”

And it’s true, sometimes we can’t blame people for thinking that way because it’s just what society has taught us. We’re all raised to think that if a women is wearing revealing clothing she’s willing to have sex.

The only way to know for sure if someone has given consent is if they tell you. Sometimes the person might look like they’re okay with doing something, but on the inside they’re not.

So if you’re ever wondering whether your partner or someone you’re interested in is comfortable with having sex, just ask. Because consent is everything.