OP/ED: Kaepernick Shouldn’t Forget Those Who Give Him Right To Protest 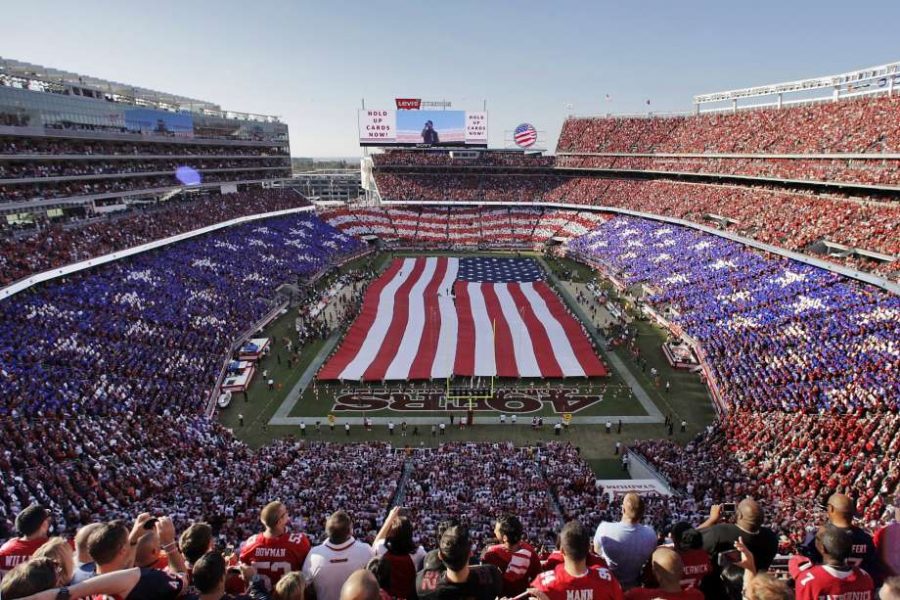 If there’s one thing I have learned within the past few weeks, it’s that it doesn’t matter what team you root for, or if you don’t watch football. Everyone knows the name Colin Kaepernick.

In case there’s a small percentage of people who have no clue what I’m talking about, during the Green Bay Packers v. San Francisco 49ers preseason game, quarterback Kaepernick neglected to stand during the national anthem.

Why? As a way to protest. Or to give fans a reason to criticize him.

His statement surrounding why, to Steve Wyche of NFL.com was, “I am not going to stand up to show pride in a flag for a country that oppresses black people and people of color….To me, this is bigger than football and it would be selfish on my part to look the other way. There are bodies in the streets and people getting paid leave and getting away with murder.”

Now, there’s many questions surrounding the methodology he decided to use as a way of protesting. Many people believe what he did was disrespect for the men and women fighting overseas. But, I suppose he took that into some consideration during the next preseason game against the San Diego Chargers.

It was on their 28th Annual Salute to the Military night and instead of sitting silently, he knelt down. He was joined by a teammate, Eric Reid.

In a press conference later on, Kaepernick said, “I realize men and women of the military go out and sacrifice their lives, put themselves in harm’s way for my freedom of speech and my freedoms in this country, my freedom to take a seat or take a knee….I have the most utmost respect for them. And I think what I did was taken out of context and spun a different way.”

In one of my classes, the Kaepernick ordeal became a topic of discussion. A fellow student lashed out how he believes what Kaepernick is protesting is a good thing. I agree with him to a certain extent, as the stance that he’s bringing to light is definitely something that needs to be talked more about: racism and policing in America.

What I don’t agree with is what this student in class said next.

“I’m not opposed to what he did. If he doesn’t want to stand for the anthem, that’s OK ’cause it doesn’t represent the military, anyway.”

Now, there’s many veterans that disagree with that, like my grandfather, for example. Ever since I can remember, my grandfather, a Korean War Veteran, has always reminded me the ways of honoring the American flag and what not to do. It’s almost as if it’s his second language.

He’d say, “Always salute the flag whenever you see one.”

But the one that always stuck with me was  “Always stand for the national anthem to show your respect to the service men and women,” he’d repeat.

Of course, there’s no written statement that says the American flag represents the military. But to veterans, the American flag is more than just a flag waving in the sky; it stands for everything they have ever fought for.

Having both my grandfathers fight during the Korean War, my uncle in Desert Storm, and my cousin, who has done a few tours in Afghanistan, standing for our flag is the least I can do to show my love and support.

The American flag has nothing to do with oppressed people of color. Yes, they may live in this country, but the flag stands for every American citizen: white, black, red, orange, yellow, green, blue, purple.

Kaepernick may be free to stand, or not to stand during the national anthem, but what people who stand behind him are neglecting to see is the deeper problem. While he’s right that oppression has been a problem in this country, we can’t forget that there’s men and women serving on the lines to stop oppression from spreading. This is something we’ve seen when we learn about history and all the past wars.

When I look up at the flag, I think of the many lives that have been lost to protect the freedom of the United States. Of course, I understand that everyone has their right to exercise their rights as an American citizen to protest what he or she feels is a problem, but it’s not the right thing to do.

What really gets my mind all over the place and wonder if Kaepernick has been playing without a helmet is when I think back to the Olympics. Usain Bolt from Jamaica stopped midway during his interview to stand in silence for America’s national anthem.

When I think of Kaepernick, it’s not based upon his skills he brings to the field. It’s the idiocy he brought to the field by not standing. He gave Americans a right to criticize him for making a gesture that will do nothing to solve the problems he identified for disrespecting the symbol of this nation. There’s brave men and women sacrificing their lives so he and other Americans can enjoy the precious freedoms of speech and expression.

The fact of the matter is, we can do whatever it is we want because of the brave service men and women who are putting their lives on the line everyday so we can be a free country. Standing for the national anthem is the least we can do, to honor them.