It's time to accept the singular they for what it is. 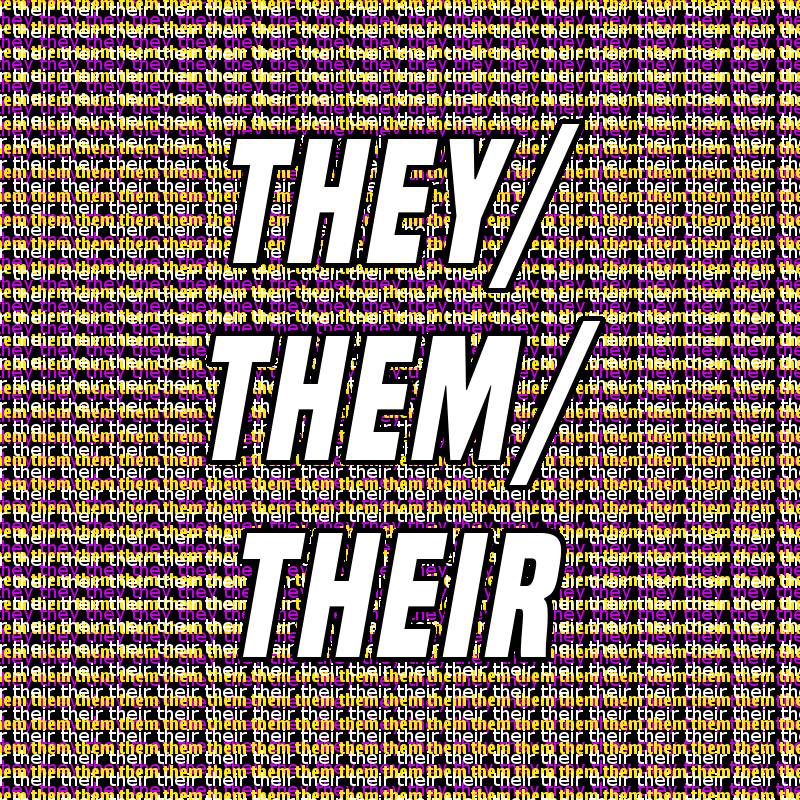 Recently, Merriam-Webster, the publishers of one of the most popular and trusted English dictionaries, made a notable recent addition to its online dictionary:

“Dude, where are your friends?”

“I don’t know, let me text them and find out where they are.”

“Hello everyone, my pronouns are he and they.”

The singular they, while not a new concept, is being treated as such by grammar freaks and transphobes, whose frustrations, while also being ridiculous, are also ignorant.

While many see gender as a blue or pink concept, meaning that you’re only a boy or girl, it’s important to point out that many don’t accept the binary gender system. Without turning this editorial into an argument against this system, I’ll keep it down to the core point made by opposers: gender is a social construct.

It’s only as true as the culture that promotes it. Before you throw your hands up in the air and chase me down, give me a chance to clarify this point.

Let me ask you a question, likely New York-based reader, do you believe that your experience as growing up as a boy or girl is the same here as it would be in places such as China, Nigeria, or Iraq? Do you believe that the same standards and expectations would be seen of you if you were born across the world?

By agreeing with either of these questions, you’re already complying with my argument already. What it means to be a man is subjective. Go back 100 years; what a man was supposed to be would be different, too. Rules and assumptions are constantly changing. There is no inherent way to universally identify as a man or woman in every part of the world.

While we can perceive gender in a similar manner throughout the Western world, Western civilization doesn’t include everyone and everything in our world. Other cultures all over the world, including the Two-Spirited people of North America, are legally recognized third genders.

So, to continue my original argument, many choose to not accept the binary gender system. This leads us to introduce the primary users of the singular they, the agender people.

Whether it’s the term ‘agender,’ ‘non-binary,’ or ‘genderqueer,’ the concept revolves around the feeling of not identifying as either a man or woman or feeling as both. Again, I’m not here to argue the validity of these people because they already are valid, and if this bothers you, I don’t care.

This can root from the sense of being born in the wrong body or a general refusal of the binary system I’ve already been speaking about.

Since many of these individuals choose not to identify as a man or woman, they also choose not to use ‘he/him’ or ‘she/her’ pronouns, either. While there are other alternatives, which are okay to use, I will focus on the most popular of the bunch, they/them.

To compose my argument, I want to concentrate on three specific points that along with making the most sense, also combat three of the most common arguments I hear against the singular they.

We already use the singular they a lot.

Yes, believe it or not, we already use this a lot, actually.

Let’s make up a hypothetical scenario: you’re at work and getting ready for a meeting, you see that a guest speaker is coming in for a talk to lecture you about whatever.

You see the name, “Sam Jones” on the spot where they would be sitting, but they’re running late. What would you say in response to their absence?

I don’t know exactly, but I can tell you what you wouldn’t say:

“When is he or she coming?”

When we don’t know the gender of someone because of not having met them or a case of where multiple genders are already involved, we default to the singular they, because it makes sense to do that.

There is a long history of the singular they and language evolves.

English can be a beautiful language, it’s influenced by many other language families over its long history. We can describe so much in an abundance of styles.

Despite this, English has always suffered from a major problem to this point, it’s never had a true gender-neutral pronoun (until now.) As a result, the singular they has filled that void.

In fact, it has been doing that since 1300, according to a Merriam-Webster, explaining the reasoning for adding the singular they to its dictionaries.

Even the great William Shakespeare, who English freaks obsess over, used the singular they in A Comedy of Errors:

“There’s not a man I meet but doth salute me

As if I were their well-acquainted friend”

Disclaimer: The Impact is not responsible for any heart issues English professors and majors go through following the previous point.

Language is also not a static concept. It evolves and meets the new challenges that society puts on it. Look at the title of ‘Ms.’ for example.

While its origins stem from the 17th and 18th centuries, it has only gained mainstream popularity in the last 100 years. This is my point, I’m sure it outraged men that women could receive a title that didn’t have to do with marital status, but as a society changes, so does the way it speaks.

If you’re looking for another similar case in another language, look at the Latinx/Latine controversy within Spanish. Change is inevitable, especially for language.

The singular they is way more practical than what we’re doing now.

In all seriousness, using the singular they just makes sense.

Compared to having to guess someone’s pronouns, or God forbid using ‘it’ to describe another human being, why not just use ‘they’? It’s already in our language arsenal and we use it more often than we realize.

When I was first introduced to the concept, it took me a while to learn how to use it, because it can be difficult. It didn’t take long though; not only does it make one more respectful toward other people, it also saves one the time of having to write out “he or she” or “s(he)” or whatever unnecessary alternative is being pushed.

Even from a journalistic perspective, it takes a lot less page space to write out “they” than the other two suggestions I just mentioned.

Also, read this entire piece over after you’re done, look at how many times I use variations of the singular they; you likely didn’t even notice it because it just flows.

I believe a large part of this controversy doesn’t arise from the actual use of the word, but of the rejection of gender from non-binary people.

Many stem from the belief that if something is different, it must be bad, which couldn’t be further from the truth. The way I look at it, if someone can be happy with themselves, and it doesn’t come at the expense of others, why should we combat it?

Shouldn’t we encourage the promotion of a happy society? Is that not the goal of our lives? The concept of a pronoun making someone happy or sad might sound ridiculous to someone outside of the bubble, but that doesn’t make it any less valid to the person who cares. It’s their identity.

If someone started calling you a nickname you didn’t like, and you get upset about it, would it be justified? I’m not comparing nicknames and pronouns as equals, just to clarify, but my point remains the same: people like to be identified in a way that makes them feel comfortable, so who is anyone to strip them of their identity?

Whether you agree or don’t, it won’t affect the changes in our society and culture that are happening. So instead of pushing and fighting over something that has no impact on your day-to-day life, maybe we should step back and start evaluating what we can all do to make everyone happier. This, in turn, might just make the world a bit of a better place for him, her, and them.