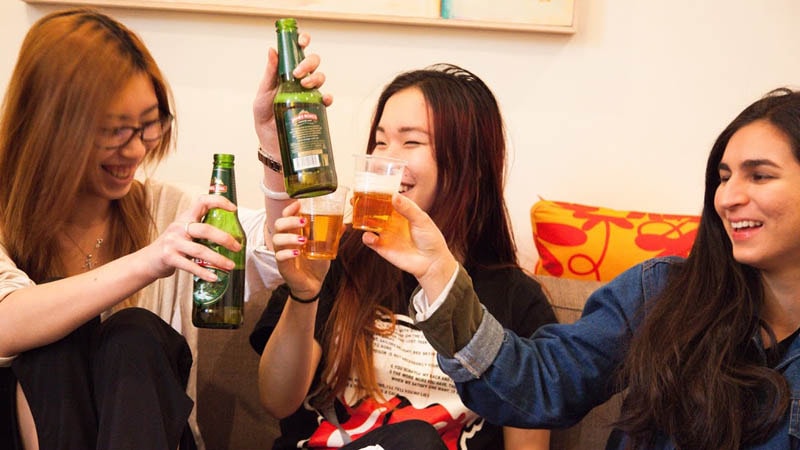 You think about it briefly, and then you take one sip and then another, until you find yourself searching for your issues at the bottom of a bottle. The consequence of drinking can be lethal for everyone regardless of health status, gender, and age. However, alcohol addiction is a danger to teenagers that are living in the United States.

In 2019, seven million young people ages 12 to 20 reported that they drank alcohol beyond “just a few sips,” according to the National Institute on Alcohol Abuse and Alcoholism website. This same demographic is responsible for drinking 4.1 percent of all the alcohol consumed in the United States. Youth within this age group typically drink less than adults do. However, when they do drink, they drink more because 90 percent of all alcoholic drinks that are consumed by these youths is done through binge drinking.

Young people who are not of the legal drinking age usually participate in binge drinking as a reaction to pressure from their peers. This is a traditional practice that is very common among college students particularly the ones who are involved in fraternities and sororities. This is a very dangerous practice that should not be condoned because it is potentially fatal to student participants.

Timothy Piazza was a 19-year-old student who was forced to drink during a hazing party at Penn State University. In his intoxicated state, he fell down the stairs and further injured himself. His fraternity brothers did not move in a timely manner to alert the authorities of his condition and that delay along with the internal injuries that he suffered resulted in his death.

Alcohol sends signs to your body during overindulgence and it can be life-threatening when we ignore the warnings.

The NIAAA states that in 2019, 4.2 million young people reported binge drinking at least once in the past month. In that same year, 825,000 youth reported binge drinking on five or more days over the past month. I believe that with statistics like that, we should be deeply concerned about the future of our country as more and more young people are becoming susceptible to alcohol addiction.

The legal drinking age in the United States is 21 years and older and yet there are still teenagers that are experimenting with alcohol. Many critics argue that if the drinking age was lowered that it would minimize the risk of teenagers binge drinking because alcohol would no longer be prohibited which means that they are unlikely to consume it in private environments where they are unsupervised. While that may be true, I do not believe that teenagers can make smart decisions about responsible drinking at their age which could result in them hurting themselves and others.

In my home country of Jamaica, the legal drinking age is 18. In my experience, my teenage friends made terrible drinking decisions despite being allowed to consume it in a public setting. These decisions placed them in life-threatening situations that they had to be pulled away from quite frequently. Most teenagers are immature because their brains are not fully developed at that age. Allowing them to use any kind of drug only makes their psychological development worse and gives them easier access to making undesirable decisions like drinking and driving, violent confrontations, and sexual misconduct. Also, bear in mind, that teenagers are high school students who should not be exposed to any kind of substance whatsoever because intoxication leads to impairment in judgment and lack of self-control which puts them in harm’s way.

I know that there are teenagers who will say that if they are able to fight war and vote then they should be able to drink tequila. However, acting in the best interest of your country and its citizens is not the same as deciding to abuse a drug or substance. Your vote and fight as a patriotic duty to your nation to protect and preserve the rights of others, unlike drinking.

The solution to alcohol addiction within young teens is to enforce harsher penalties to adults who allow underage individuals access to alcohol. The laws that are in place right now vary within states, but according to the Alcohol Addiction Centers website, individuals who are convicted of supplying alcohol to minors will most likely be put on probation and may have to perform community service and other services. I believe that a more extreme form of punishment is required.

According to dual diagnosis.org, The D.A.R.E (Drug Abuse Resistance Education) program was developed by law enforcement and school officials in 1983 to introduce information about drug use to students in order to lower the substance abuse rate. Whether or not the program was effective in its goal remains controversial to this day. Proponents of the program claim that youths retain the information that they learned and carry it onwards as they develop. While opposition tout the efficacy of the D.A.R.E. program, citing poor statistics that do not back up the claims the organization promotes. However, I believe that just like sex education is a part of every school’s curriculum, education on alcohol and other drugs should be a mandatory subject at every institution so it is up to the education system to develop and implement a program that is effective in bringing the message across to the students.

Alcohol addiction is a very dangerous practice for our young teens and that is why it needs our immediate attention as a society. The truth is, once they start feeling the buzz from the alcohol, it is difficult for them to stop so we should do everything in our power to stop them.