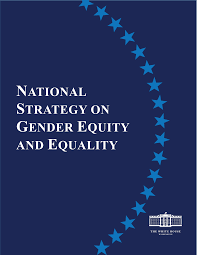 The Biden-Harris Administration issued the first-ever National Strategy on Gender Equity and Equality on Oct. 22 with aims to advance social issues at the heart of the administration’s agenda.

This strategy is another example of the radical left’s involvement in this Presidency. It is probably their boldest attempt to destroy the building blocks of this nation, and most of what’s left of common sense Western Society.

It methodically targets core issues and gives the feel-good line about why their idea is the best and only answer. As usual, though it doesn’t dive deep and explain whether that solution will work or if what they said makes any sense. It’s all just fluff to show just how progressive they are.

To spare everyone the agony of reading the 42-page document outlining their agenda, there are six key issues to focus on.

First off is the Gender Pay Gap, which the strategy calls a “stubbornly persistent problem.” It’s a prime example of how this illogical strategy just throws data at the readers and hopes they don’t try to think for themselves.

Those statistics presented on their own sound horrible, but as usual, no context is given to perhaps why that might be the case. The main reason is the fact that only women can get pregnant and have children. During the pregnancy, a woman will need to take time off from work in order to handle that. When you are not working, you will get paid less. It’s simple logic

Now let me be clear, if a woman and man do the exact same job and produce the same product. They should be paid exactly the same. If they are not, it’s an injustice we should all rally behind. First however, you need to first look at the reality of the situation.

According to Pew Research, 55 percent of the women say children are better off when a parent stays home to focus on the family. In most places, that will be the mother as she is naturally just a better caretaker of children. Essentially, you are cutting the woman workforce in half when they decide to start a family.

Looking now at the number of Latinos, it is reasonable that the number would be even less. In 2020, 77 percent of people in Latin America considered themselves to be Christian, according to Statista. 57 percent of them are Catholic.

These are faiths, which place an overwhelmingly strong emphasis on traditional family life. It is vital to them to have a mother at home taking care of the children for extended periods of time. When they do take this time off from work, they don’t get paid. Thus women who are still on payroll that year will naturally earn less.

This doesn’t mean women are being punished for reproducing either. They are making their own decision to prioritize their families over working a full time job and being fairly compensated for it. Whether a woman decides to pursue a job, a family or both at the same time, everyone should support them in their own decision.

However, when there are logical reasons for why something might not be perfectly equal, that’s okay. People can make their own decisions with their family and money.

Secondly, this plan states how they intend to expand access to Pre-K to everyone and not just in the United States but around the world.

“We will also promote universal pre-kindergarten education, giving a head start to our earliest learners and boosting labor force participation, as well as extend and expand tax credits like the Child Tax Credit so that parents can cover everything from buying diapers to putting food on the table to paying the rent or mortgage.”

The two most alarming parts of this aspect of the strategy are that they want your kids in their education programs as young as possible and they apparently have enough money to help everyone pay for this.

The first part is creepy on its own, so no need to dive further into it, but the second one is mind-blowing. At the time of the writing of this article, we are about $28.9 trillion in debt. That may not seem like a lot so I’ll write it out.

Basic math would indicate that we have no money to pay for anything. However, the administration intends to provide Pre-K across the entire globe while giving tax credit for diapers and your mortgage. It would be great in the real world if we could just pay for luxury things such as Pre-K without paying for it.

Instead, whatever debt is added will just be passed off to the next generation until eventually, the entire system collapses, and nothing is left.

Don’t get me wrong. It is a great idea and well-intended. It’s just not possible no matter whether it’s a democrat or a cowardly republican telling you otherwise.

Now we move on to our third point of emphasis in this strategy meant to eradicate the norms that help build Western Civilization. The plan calls for more ways to promote the gender ideology and transgender issues of today, which is one of the most polarizing topics any person could discuss.

The report states, “We also combat discrimination and harmful gender norms that affect people of all genders: women and girls— including transgender women and girls—gender nonbinary and gender-nonconforming people, as well as men and boys.”

It is fascinating how radical the statement that men are men and women are women has become over the past few years, but that is the world we live in. This policy stance only aids in gender confusion, which is a pandemic in our county.

It is not discrimination to prevent a biological man from going to the bathroom or other private places with women. You are protecting women from incidents that have begun to happen in places like Loudoun County, Virginia. These are not one-off incidents, but the beginning of a wave of these evil acts happening throughout the nation.

This isn’t even a radical conservative stance. According to a 2020 Gallup Poll, 62 percent of U.S adults believe athletes should play on a team that matches their natural gender. That’s a strong majority who know that something isn’t right there.

Gender ideology only seeks to target those who believe in traditional Western values and attack everything they stand for all in the name of progressivism.

Now we move to the fourth and most bizarre statement out of the entire strategy.

“From the Emancipation Proclamation to the passage of the 19th Amendment, to the Voting Rights Act and the Civil Rights Act, to the fight for reproductive rights and marriage equality—and countless movements and victories before and since—America has been strengthened through the years by our tireless pursuit of greater equity for all.”

Apparently, the Emancipation Proclamation, a wartime measure in the middle of a Civil War to free slaves held in literal chains is the equivalent of ensuring abortion for all women.

No matter how they decided to dress up abortion as “reproductive rights’ to make it sound better, it doesn’t change what it truly is. I don’t blame them though. If I supported a policy that has caused the death of over 63 million Americans since 1973, I would probably want to hide it too.

They can’t be allowed to however, the genocide of the unborn in this country is the worst aspect of this county currently. It has been a driving force behind the culture of death which has engulfed this nation.

Despite this, the radical left wants to go even further with it as stated in their plan.

“That includes supporting the repeal of the Hyde Amendment because health care should not depend on a person’s income or zip code.”

The Hyde Amendment ensures that federal funds will not be used for nearly any abortion. This is vital to protecting good people from supporting this great evil. No person should be forced to pay taxes and have those taxes go towards a policy that will lead to the death of another human.

In fact, as recently as 2016, 58 percent of Americans supported the Hyde Amendment and believe it should stay in place.

This means absolutely nothing to the Biden-Harris Administration as they have their own agenda to push and not what the American people want. They don’t care if you have to risk a jail sentence for tax evasion to ensure your morals stay intact.

They kill babies, why would anyone think they actually care about you?

In this strategy, you will find a lot of topics that belong and make sense in accordance with the theme. However, they don’t miss this wonderful opportunity to bring in gun control.

The plan calls for the “implementation and expansion of common-sense gun legislation to keep firearms out of the hands of adjudicated abusers.”

If this plan was serious about the issue, they would bring up how the legislation already in place needs to be enforced to prevent these cases of domestic violence. They also might highlight the issue of mental health in this country corresponding to gun violence.

Either of these would be fair assessments of the issue, but instead, they give a vague line about “common-sense gun legislation.” No one knows what that means, and that is the point. They will use it to push whatever legislation they want all in the name of safety.

The term “shall not be infringed” means nothing to them.

Perhaps the scariest part of this strategy is in the overall theme that this policy is not just for the United States but for the entire globe.

“Globally, we will marshal diplomacy and foreign assistance to promote reform of national and sub-national laws that discriminate on the basis of sex, sexual orientation, and gender identity, including in the areas of work, property ownership, and inheritance, freedom of movement, family law, and health care, among others,” states the strategy.

Since when did the U.S. get to decide how other societies live their lives. I understand the moral obligation to defend people in face of danger but is this really the same? The answer to me is absolutely not.

Look at our own country, for example, the cultures of New York City could not be the more polar opposite of Western Montana. They are two completely separate ways of life. You can legislate a blanket policy over both and expect it to work.

Now imagine you try to do that across the entire globe with every different culture. It will fail miserably.

They don’t even want to just target gender issues, but also property ownership, work, and family law. They want to control everyone in every aspect of their lives. This is true from the COVID restrictions all the way through to this policy.

This was never about equality or equity. They want to destroy the West, destroy the family and then people will have nothing left to fight for. It’s time conservatives stop being cowards and stand up to this agenda.