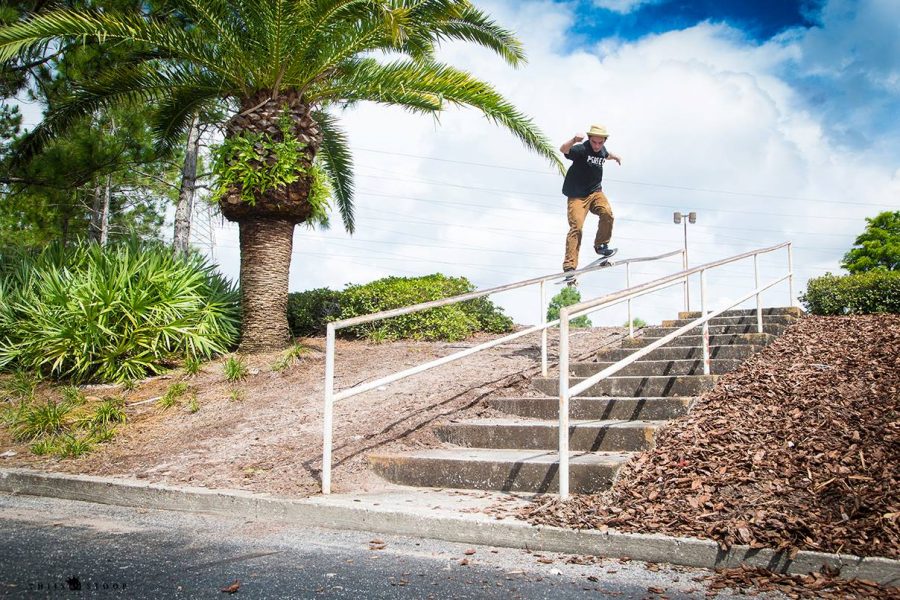 Anthony Biggs looks like all the rest of them – ripped jeans that hang low on his waist exposing his choice of boxer or brief, or more the fact that he prefers neither. His scratchy voice reeks of last night’s booze, and his trailing joint does little to contradict his thrasher façade. He enjoys trespassing on a vacant wheelchair ramp for no other reason than that he has nothing better to do. In New Port Richey, snorting grandma’s sleeping pills and jumping the neighbor’s fence to skate in their empty pool is just another Friday night.

To the cops and cane-waving geriatrics who populate the small Florida town, those assumptions would be true of Biggs and his skate tour buddies. They never stuck around long enough to defend the idea that they skated for reasons other than boredom. Being on tour meant they didn’t stay anywhere long.

Like a bunch of skateboarding lost boys, never aging and fighting puberty in their holey Vans, they embraced the stigma that comes with bloodied knees and broken bones. Being good gets you laid – maybe. But you have to be better than good to skate on tour. It is about playing the part, selling the role; to skate with the crew, you have to party with the crew. 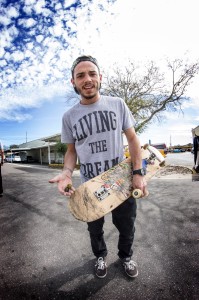 Since skateboarding was popularized in the late 80s, it’s been cultivated by diehards that thrive on the possibility of an ER visit and YouTube stardom. But video clips that garner more than a thousand hits are reserved for those fully committed to all that embodies the skate world. Today, skateboarders like Tony Hawk and his snowboarding counterpart, Shaun White, are more than athletes. They are icons that balance their skill with the unconventional culture.

But before advancing to dreams of Olympic medals and a loyal fan base, most skaters started as Biggs and the rest of his crew did, with crummy sponsors and the promise of a good time.

“The tour doesn’t pay with money. They pay you with drugs and product. It’s a party every night for those guys,” Biggs reminisces with a husky exhale. “Shit’s crazy looking back at it. We had no responsibilities, it’s not like now.”

Chugging and inhaling the excitement of new friends and free luxury, life off the tour seemed like a joke. The party didn’t end until you passed out or were knocked out. To a 22 year-old Biggs, it seemed like the ultimate deal; skate, party, repeat.

He had no insecurities, no fear, which to most was taken as a sign of too many handrails to the head. But contrary to their belief, Biggs skated with strategy. When each skater is more fearless than the last, killing themselves and trying tricks their buddies hadn’t stuck just to say they did it first, it’s hard to gain even a smidgen of recognition. That would take either blood or pure stupidity.

What Biggs lacked in responsibility and sobriety, he made up with in guts. Only gutsy people would throw themselves down a 20 set staircase in hopes of riding the rail the whole way down – and he did. But lucky for him, the only people who nail that kind of trick are the ones who are crazy enough to try it in the first place.

“I always try the stuff no one else wants to do. I guess I’m kind of the leader in that way,” Biggs admits shyly. “But what a lot of people don’t know is that skating is 75 percent confidence. I only do the stuff I do because I tell myself I can. The Law of Attraction, yuh know?”

His rugged vibrato becomes softened by his boyish dimples, and suddenly his presidency makes sense. Being liked by everyone isn’t so much a job detail as much as an inevitability for Biggs. His insightful words seem out of place, yet his strong belief that positive thinking will bring positive outcomes is refreshing. It wouldn’t take much for him to talk you into something ridiculous, a something that would most likely result in a trip to the hospital. Maybe jail.

It’s almost as if he is two different people. One enlightened and motivated by the pure nirvana of skating; and the second, a burnout in the back of class that wakes up every once in a while to insult the teacher. Ironically, both likeable. But sometimes, the price of being liked leads to a road of self destruction.

“We’d take molly and get drunk enough that we’d blackout and head-butt each other,” he half laughs. “On tour, you act first and think later.”

The temptations of fame and irresponsibility proved to outweigh consequence. Skateboarding, as any other sport, has a deadline. One day the knees would give, the falls would hurt more and the constant search for that adrenaline rush would subside, assuming one made it long enough to call it on account of age. Biggs was determined to take full advantage of that window of freedom and youth.

But with each tour city came the demanding perform on the board and off. He was living a life of chaos and faced with the pressures of staying interesting.

Though skateboarding had always been a way for Biggs to let off steam, his whole world had turned upside down in the few short months that he had been part of the tour. A stable sense of self was hard to grasp on the road in a crowd of enablers. Temptation led to addiction, and more misjudgments and then eventually to a pregnancy test.

This was a 180 degree stunt Biggs hadn’t prepared for. Bottles of booze quickly were substituted with bottles of infant formula, and he was thrust into a world that now required responsibility.

“I had to do it. Lilly changed my life. I’m in love,” Biggs admits about his new baby girl. “She has completely changed the way I live.”

The sport of skateboarding is not only physically dangerous, it can become emotionally and mentally draining when taken to extremes – which backwardly is what the sport is all about. Fathering a child at 22 would be hard to anyone suddenly thrust into a delivering room, but Biggs questioned whether his old habits would die fast; how would this next jump turnout when he had no chance of sticking it?

He turned to skate strategy.

All those years shredding on the Law of Attraction proved to be valuable in a whole new way. He knew what it had felt like to fall down- literally, but suddenly he had to dig deep in order to survive without the help of drugs and false happiness; he had other people relying on him now: a new crew.

“The key to life is just to be happy. They don’t tell you that in school,” Biggs shares. True to any parenting book rumor, having a child has changed him, it is apparent in his tone and overall outlook on life.

“If you can see the person you want to be, and use the mistakes you’ve made in your past as learning tools, the universe will help you become that person,” Biggs closes with a scratchy Buddha tutorial. “I’m still that gnarly punk you’ll see in the park; that’ll never change. It’s just the Law of Attraction, yuh know?”