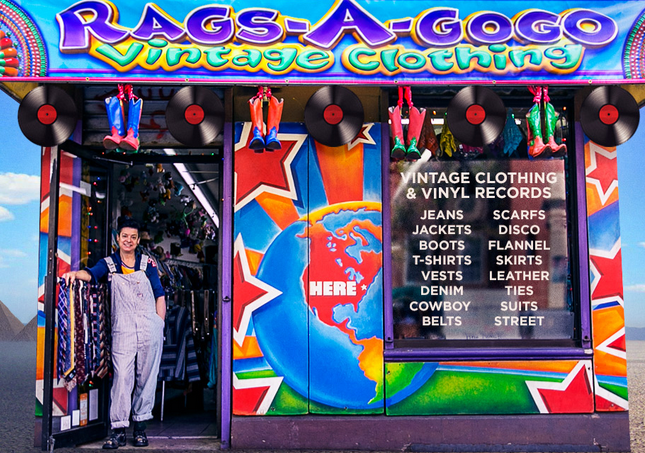 Cowboy boots hang above the awning outside. The psychedelic writing on the storefront sticks out against 14th Street. Clothing lines the wall on double racks attached to the wall.

A couple blocks away from Union Square, nestled amongst chain stores between 7th and 8th Avenue sits Rags-a-go-go.

“Welcome guys, just to let you know the prices are right there,” Joshua Suzanne, 52, Owner of Rags-a-go-go, gestures to the white board on the wall with all her prices for everything in the store. “The sweaters go for $48.” She greets everyone happily in a place she’s manned since 1991.

Josh owns one of the most organized vintage spaces one has ever seen.

“I don’t do chaos. Chaos makes you crazy,” she says as she bags a customer’s item. “People don’t want to shop in chaos.”

It all happened by accident. After hanging out in New York during the ‘80s, she decided to move to the Big Apple in 1989 to overcome a broken heart.

With nowhere else to go, Josh packed up her things and set out for a new life. After stints in car finance and managerial experience, Josh was picked for a management position for the vintage store Alice Underground.

Back in the ‘80s, New York was dangerous and much different than it is today. Alice was one of the only stores open until 7 p.m., Josh remarks that she had a blast. With the owners never really there most of the time, she pretty much ran the store how she and her friends wanted.

“Then I thought, I could do this,” said Josh.

She set out on her own and within a year, she was in business for herself. That same year in 1991 she was let go of her position at Alice Underground let Josh go after he saw something special in her. He noticed that Josh was a natural go-getter and self-starter.

Almost 26 years after that day in April of 1990, Josh was still in business. Which is an accomplishment in it of itself, especially in New York.

“Yeah, but you know what’s tough? The rents,” said Josh.

She now pays $10,000 a month for her store. The only storefront she has now as of 2001. Before then, Rags-a-Go-Go has four storefronts. The current one 14th Street, two in the East Village and one abroad in Spain. All four of those rents total were $10,000 about 14 years ago.

Six months after the Sept. 11 attacks, Josh closed both stores in the East Village and soon her Spanish store followed suit as well.

So why vintage? Josh had been wearing secondhand clothing her entire life. When she was little, Josh used to love wearing her aunt’s skirts from the ‘50s and her younger brother’s shirts. 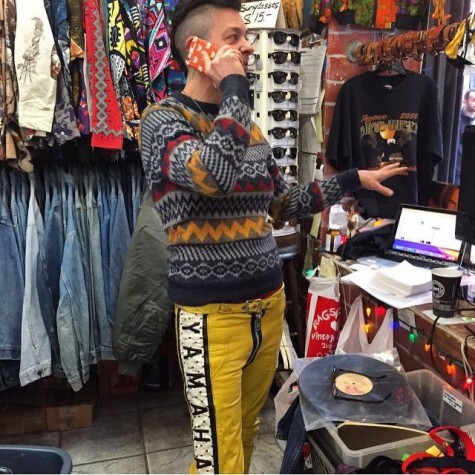 Everything in the store is handpicked. Her specialty is “Street Fashion Vintage.”

“Day one to year 20 is Thrift. Twenty years to 75 years is vintage and anything at least 75 years and older is antique clothing. Everything in Rags-a-Go-Go is at least twenty years old,” Josh informed.

Whatever is in fashion, she does. This year it’s denim, industrial, army and flannel. She keeps her store updated with what everyone else is wearing. Or at least tries to, usually customers come in and ask. If she get more than three requests for something, she goes and gets it.

She seems to know what her customers are going to ask for next because she’s lived it.

Josh embodies her clothing, having been born 14 hours after JFK’s assassination, Josh likes to call her life the sponge of social change.

In order to get the items she needs and what feels right to her store, she goes through piles of clothing just to pick up about 100 pieces that she sells.

Before she goes to warehouse’s that are full with clothes from any time period one can think of, she writes everything down in a list that somewhat looks like an elementary school game of MASH.

And for Rags-a-Go-Go nestled upon the chains stores on 14th Street, it stops people in their tracks to see a store that’s not really supposed to be where it’s located.

The past has been the future for 26 years.