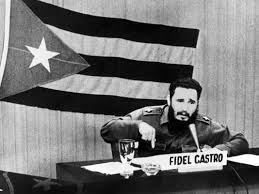 Soldiers. Soldiers in olive green uniforms. Soldiers with guns. They are not staring at anyone. They are not yelling, just being relocated. Are they just traveling for pleasure? A six year old boy sits on the train from Havana to Manzanillo, watching these soldiers while his father speaks with a local man.

The patriarch tells the local man that he, his wife, and his son are vacationing to visit family. They might be moving back. His wife does not speak English, they are having marital problems, and they have been in New York for less than two years. Most of their relatives are back in Cuba. They could come back.

The father is a Castro supporter and was happy he overthrew the Batista regime in 1959. He promised democracy and an end to government corruption. Life in Cuba would be good now.

They could come back.

The local man – older and wiser than the emigrant – offers some advice. Don’t. This business man has travelled the world. He has seen things and places most Cubans never dreamed of. He has also heard Castro’s speeches. The speeches of a communist, he warns.

A week later, in the winter of 1960, Fidel Castro severed ties with the United States and began to cozy up to the Soviet Union. The next day the family decides to leave. The guards at the airport ask why they are leaving in such a rush; they still have a few days left on their travel visa. The father tells them he needs to get back to work. He did not realize how many days he had and they needed to leave. The guards rifle through the bags, the clothes, they even check the talcum powder.

They leave with no plans of returning. These new Americans would not see most of their Cuban relatives again for almost 35 years.

Fidel Fonteboa sits in his living room in jeans and a hoodie. His chocolate Labrador lies in the foyer, watching. His youngest daughter – home early from school after taking the PSATs – tries to calm the whining Rottweiler puppy in the kitchen. His wife, an OB-GYN at Montefiore, is at work. His oldest daughter and his son are away at college. A typical, middle-class all-American family.

Fonteboa, named for his father (who was named for a family member killed in the Spanish-American War), recounts his vague memories of leaving Cuba as a toddler and growing up in New York. The most immediate obstacle his family faced was the language barrier. Even though his parents were both educated – his mother graduated high school and his father made it through the sixth grade – they could not speak English. Fonteboa did not speak the language until the first grade, but by the second grade he could converse fluently. All the English he knew he learned from watching television. People often asked him where he was from because of the accent he picked up from listening to the actors. Hollywood had decided when sound was introduced in movies that the typical “American” accent was a Midwestern accent.

Fonteboa’s mother did not speak any English and his father knew just enough to carry on a conversation. After his sisters were born, however, Fonteboa would speak Spanish with his parents and English with his younger siblings. The ability to speak and understand the language was imperative when going to a Catholic school; one either learned or flunked out and was then sent to the public schools.

After the realization that they would not be returning to Cuba for quite some time, assimilation was very important to the Fonteboas. In addition to having their children learn English, they Americanized most aspects of their lives. Christmas was no longer on Jan. 6, but on Dec. 25. They began to celebrate Thanksgiving, which did not exist in Cuba. They began eating hot dogs, hamburgers and pizza. American influence surged while Cuban influence was hampered.

The language barrier was the largest source of prejudice the Fonteboa family faced. Fifty years later, almost every store has bilingual signs or bilingual employees. There are plenty of Spanish television channels to choose from with varying programs, from cartoons to telenovelas to movies. In the 1960s, there were some signs, but children would often need to translate for their parents. In school, the other children did not seem to mind if Fonteboa could not understand, but the teachers would treat him differently.

“That kind of assimilation happened all the time,” Fonteboa recalls, “but I don’t know if that’s happening anymore. We’re the only country that doesn’t have a national language.”

Fonteboa did not care what they said or thought of him, and he has not thought of it to this day. It does not matter what color one is or what language one speaks, if one is different from everyone else, one will be treated as different. “Everybody’s being discriminated against,” he says laughing.

These differences helped Fonteboa as he grew up and began looking for a career. He wanted to help and protect people in need; those who could not fend for themselves, those who were lost. So he became a police officer.

Fonteboa worked in the Bronx for twenty years – most of that time spent at the Bronx Zoo – before retiring. Coming from a Latin background helped him on many occasions to catch criminals, give directions, or help a lost child find his or her parents. People did not always know if he spoke Spanish and, if asked, he would deny it unless they genuinely seemed to be in need of his assistance.

In late 2014, President Barack Obama and Raul Castro announced they would begin to restore the severed ties between the United States and Cuba. Many people thought it was a brilliant idea, that the embargo had gone on for far too long, while others believed this action will portray the United States as weak because the Castros have not lived up to their end of the deal set forth in the embargo’s guidelines. A Cuban emigrant, however, would have understandably mixed feelings about the possible relationship between the two countries.

Fonteboa says he feels conflicted about it, saying it was inevitable. “I mean we have diplomatic relationships with Russia and Germany…with Japan and Vietnam,” he states, “Why not Cuba?”

The fact that Fonteboa feels the blossoming relationship between the United States and Cuba was undeniable does not mean he likes the way the administration is handling it. He is just one of the countless individuals who feel that we need to see more progress in Cuba before the bridges burned almost fifty years ago are rebuilt. Fonteboa states that Americans and people all over the world need to remember that the Castros are still dictators who abuse their power, likening them to Saddam Hussein and Muammar Gaddafi. The lack of discussions regarding freedom of the press, human rights, the release of political prisoners, and the extradition of convicted cop-killers concerns Fonteboa, among others, with how the rest of the world will view the United States. If America does not push for a better, fairer society for the Cuban people as it intended when the embargo was set in place, how can it expect other nations to take it seriously in the future?

Fonteboa cannot understand why many liberals in America sympathized with Cuba and the aggression toward America. He can only assume it is because the Cuban government wanted to stand on its own. “It’s the one little country that stuck its thumb in America’s eye and said we’re going to be independent.”

Unfortunately, the leftists turned a blind eye to the fact that the Castros are dictators. Even though Fidel Castro had been elected as president time and time again, he put his brother Raul in charge after he had gotten sick.

Fonteboa says it is all an illusion. “That would be like if President Bush had left Jeb in charge and said ‘Now he’s the president.’ There’s no political freedom in Cuba.”

Fonteboa has only been back twice – once in 1993 and once in 1994 – since the diplomatic ties were severed in 1960. The United States were being accused of restricting travel rights for the American people so they began to allow citizens with immediate family members in Cuba to visit. In order to go, one needed permission from the Red Cross, the United States Treasury Department, and the immigration agency in Cuba. The amount of money was limited to approximately $100 a day plus $300 for necessities and the participants had to fly back and forth from Miami.

There has not been any desire for Fonteboa to revisit his home country after getting married in 1994 and having three children. He has never felt any type of “survivor’s guilt.” He has always identified as an American or a Cuban-American, not as a Cuban.

He never felt like he needed to share any special traditions or any particular cultural aspects of Cuban life with his children.

They do not speak Spanish. They eat Italian food three or four times a week and hardly ever cook Spanish food.