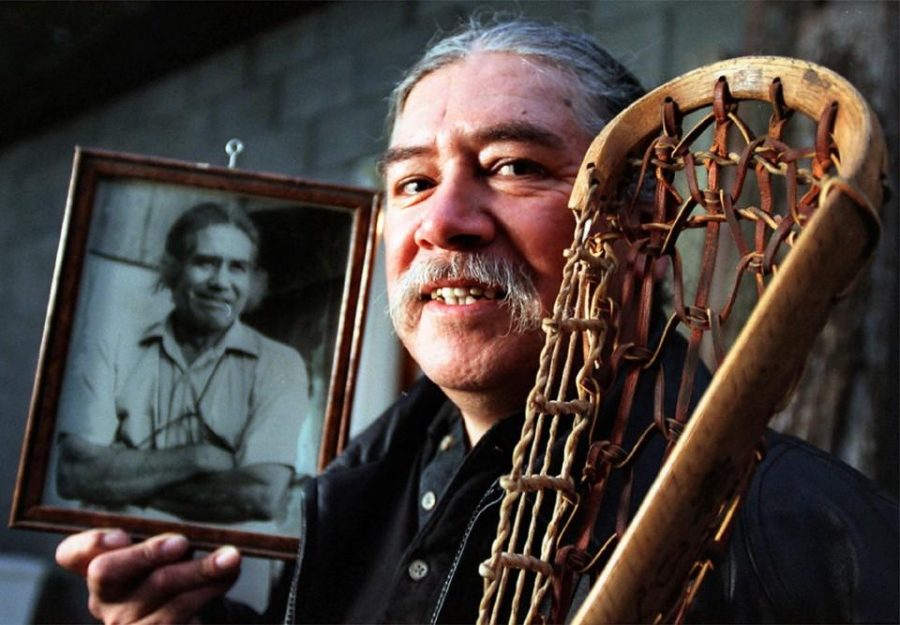 From the time one enters until the time they leave, the aroma of fresh lavender, morning dew, and reminisce of a fire that scorched brilliantly like the sun from the night before fill the air. The trees are flexing their vigorous bark, grass a superb green and comfy as a blanket. The melody of birds chirping, steady bucks’ antlers clashing together, squirrels’ feet rushing up the trees, crunching of leaves and snaps of twigs these are only some of the sound among nature.

To someone who wasn’t familiar with the land that sits just 247 miles north west from New York City, he or she may think a large bear is somewhere among the trees, but they would be mistaken when they come across a hickory tree and Native American Alf E. Jacques stands there admiring, remembering mornings just like this one from his childhood.

That’s how he remembered it anyways.

Now, the stench of fast food grease, smog of exhaust fumes, and roaring traffic, fill the daily aspect of the land that once had 100 to 1,000 men making the earth quaked beneath their feet. Playing a sport with no boundaries would span among 500 feet to miles among fields and woods. The area has been constricted to one peaceful aspect, a six-mile square block left to Onondaga Nation.

To honor its memory, he teaches the sacred game of lacrosse. Native Americans are the founders of lacrosse, considered to be developed as early as the 17th century. According to Iroquois Nationals website, “Lacrosse was a gift to us from the Creator, to be played for his enjoyment and as a medicine game for healing the people.” Lacrosse was a ball game between the four legged animals and the winged birds.  Lacrosse should not be a sport for money, fame, or personal growth.

In Onondaga Nation, they still honor that tradition. Within the six-mile square there is one Native American who speaks gentle and reserved, words of passion and devotion towards his heritage.  Jacques, is one of the few remaining traditional wooden lacrosse stick makers in North America. He is preserving these traditions to pass on from one generation to the next.

Yet along with the modernization of the land, lacrosse has developed across the United States, from kindergarten to collegiate levels. The massive growth of lacrosse promoted financial prosperity among corporate America, leaving behind the true traditions.

Jacques feels marketing has diminished the Native American aspect of lacrosse, it is not about the comradery of the fellow man. Regulations have seized the use of any wooden sticks to be utilized in the game outside any reservations. Lacrosse has become a sport of who has the most popular stick, pads, cleats, and helmet.  According to the U.S. Lacrosse website, the game is considered to be the fastest growing sport worldwide, leading to an increase in sales of equipment.

Some feel the tradition is feeling. He started the craft of bending sticks years ago, his voice became filled with joyfulness.

“About 54 years ago I started to make sticks, because I never had a stick of my own. I had to borrow sticks to play lacrosse.”

Jacques’s father never learned from any of his ancestors on how to make a lacrosse stick. There were three men of the family, a father and two sons, and one day they went into the woods and cut down their first hickory tree.

“We made some ugly sticks for a while, but like everything else, you learn is by your mistakes and finally our quality of sticks had become better,” Jacques said laughing with a hint of achievement in his voice.

In 1968 Jacques’s father, started a company that produced around 12,000 sticks per year.  The hand-made sticks tend to take ten months to completely finish. So hiring such a large work force was in high demand. As development of the modern plastic lacrosse stick during the 1970s, manufacturing was cut by 90 percent. The company produced about 1,200 sticks per year. This took a toll on the native tradition and quickly spread across the country, leaving fewer traditional sticks to be found.

Onondaga Nation has always had a prominent lacrosse presence among the community. It has always been the native sport.

“Lacrosse was actually almost nonexistent at one point. Onondaga got so good that people did not want to play against us,” Jacques somberly said.

The reservation enjoys their rituals, during the spring and summer months. Lacrosse is typically played outdoors. True origins of lacrosse are released among a field as the warm weather touches over Onondaga.

“We play as the creator told us. There are no pads, timeouts, officials or boundaries. Only wooden sticks allowed, and rules are discussed prior. We play on a big green lawn, which is not entirely that big,” Jacques said with enthusiasm. “Sometimes some end up crossing two roads. Our goals are not traditional, they are two post with a feather at the top. Onondaga Nation will keep to traditions no matter what is thrown our way.”

Women are prohibited to play lacrosse according to heritage. Women are supportive of the males, who take part in the tradition.

“Lacrosse is part of who we are as people, it is our own identity. Our original type of corn and bean,” Jacques said over the phone a sense of pride outweighing his gentle demeanor.

Roads, grass, trees, and agriculture are tended for in Onondaga Nation unlike the surrounding area. Jacques uses lacrosse as a tool to explain political issues with non-native citizens.

“The game had no boundaries before, but now only have so much land to live on and utilize. There are no African-American, Hispanic, Irish or Italian laws on the books by the Federal Government. In fact, laws do exist for Native Americans. Are these laws there to protect us or control us? The United States has broken every treaty that was in place,” Jacques said curiously with a slight hint of resentment.

U.S. Federal Government, relinquished responsibility for Native Americans, and reassigned to state governments. The U.S. has the First Amendment that provides protection of religion.

“The government has outlawed 30 to 40 Native American religions in previous years and continue still this day,” Jacques said with sincere disappointment. “We are just simply the bottom of the barrel in this country. No matter what we will fight on the same side as America during a war, but we want justice for our people.”

Jacques and his sister battle the way the modern society has treated Native Americans, not as accusers, but activists or in Jacques’s term “solutionist,” meaning there is no finger pointing or blaming, but learning how to establish correction. They head to the local schools, different programs, and museums to educate people on what Jacques says, “The textbook does not teach.” He has a great deal of fun connecting with people through lacrosse.

Even with everything going on in his life, and around him, Jacques explained how he continues with the passion he loves.

“I played lacrosse my whole life practically. Whether it was in the minors, juniors, or high school. I was awarded All-Upstate Player and maintain the record for the second all-time scorer. A member of the 1967 undefeated Lafayette High School team,” Jacques said as he laughed through the phone. “We didn’t have state championships back then.”

He elaborated on more of his accomplishments in a humble matter. “I was the goalie for one season in the pro league. All the other goalies were huge, towering over six-foot-tall or wide body frame, I was the smallest out there playing,” Jacques chuckled as he described his size compared to everyone else.

“I work in the shop down behind my old family house. My sister lives in now. My brother, contributed at a younger age. He never developed into a stick maker, as for me, I was all in. My sister is very supportive of the stick making production,” Jacques said.

He says he makes sticks mainly for his people. “Native Americans are not to be presented or buried with a plastic modern lacrosse stick. When they are born, they receive a wooden stick and will be buried with their stick. I do not regularly sell to anyone outside of Onondaga Nation, but if I did, they are true lacrosse enthusiasts.”

He doesn’t agree with those who break traditions. There are Native Americans who make these sticks to sell to make profit. Once again the primary reason I do this is for my people not to make money.”

Jacques has a great opportunity to pass the tradition on to four young Native apprentices, three have ventured on their own making sticks for others, and one is currently working at the little shop. Jacques can visualize his young self in his apprentices, mold one ugly stick after another and at last that dazzling stick is shaped.

It’s not about the people who give money to the sport for Jacques, it’s the people who give back to the young generations.  “I really admire people I have seen who are 70 to 80 years old. They have paid out of their own pocket for the kids to have things, with no intention to regain their finances. That is what lacrosse was one of the principles lacrosse was developed on, to give back to the generations that come after you.”

Jacques, obtains many calls from lacrosse enthusiasts every week. These supporters are all looking for an exceptional quality wooden lacrosse stick. As the one Native American from Onondaga Nation returns to the shop behind his family’s old house and forms another stick one by one he brushes the wood shavings from his shirt and pants. The modern world moves on and the true meaning of the sport will fade away. There will be walking through the woods crunching leaves and snapping of twigs. The man who speaks gentle and reserved, words of passion and devotion towards his heritage, and enjoys the part of life he loves, spreads his culture to as many people as he can.

“The tradition is very strong where it was born. That was Onondaga.”