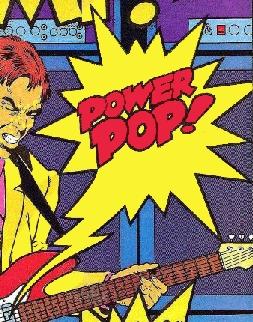 Power pop is a confusing genre of music, its hard to define, there is a thin line between what classifies a song as power pop and what nulls it. Power pop is rooted from the boogie and jangle of classic rock n roll, it is highly influenced by the grooves of R&B, the harmonies of the sixties girl groups, the melodic, forward vocals of fifties doo-wop and the romantic hooks of classic pop. It is not to be confused with proto-punk, punk-pop or over-polished pop—not that that music is bad, its just not power pop—distant cousins, if you will.

Power pop was adapted in the 60’s; bands like The Byrds, The Who and some other band called The Beatles are often accredited with the genres origin. It was through these artists in which power pop was birthed and spread to other aspiring artists. Though power pop began in the 60’s it was still in it’s infancy but would grow rapidly through the late 60’s and 70’s.

Although power pop was coined in 60’s, the true power pop explosion came in the 70’s. Big Star is often praised in being the most influential band for the genre; their impact in the 70’s affected numerous musicians who were inspired by the new sound. Their biggest hit “In The Street” may sound unfamiliar but anyone who has ever seen “That 70’s Show” probably knows the words—even though that’s a cover. The powerful impression Big Star left in the early 70’s was strongly followed up with the introduction of bands like The Dwight Twilley Band and The Flammin’ Groovies, both of whom would go on and leave a legacy of their own.

Power pop is often associated with Glam or Bubblegum; both are derivates of the power pop genre. T-Rex and David Bowie both changed not only the sound of power pop but also the nostalgic look. Their flamboyant attire and futuristic sound provided a fresh variation to the music industry.

Power pop would continue to grow through the late 70’s up until the mid 80’s, Marshall Creenshaw, Phil Seymour, The Beat and The Knack all contributed to the preservation of the genre. Bands such as Cheap Trick, and Shoes also made contributions and authentic power pop until the imminent demise of the genre in the 90’s. It was until the late 80’s until punk began having a more prominent influence on the genre. Not saying that there weren’t any good bands from the 90’s, but many of them derailed from the true power pop identity, thus, making the genre ambiguous and confusing.

Contemporary power pop is hit or miss. Its either power pop, pop-rock or just rock (without the roll). The closest modern approach to power pop since the 80’s was Weezer with their first two albums, which are great, don’t get me wrong. But, bands like Green Day and Blink 182 have just given the genre a bad name and have altered the DNA of what power pop once was and have completely desecrated the beauty that the music once possessed.

Is it sad that there isn’t much more than a helpless cry for power pop? Perhaps it doesn’t have a place in modern society, the same society that would rather listen to heart and soulless allusions like Iggy Azaelia, yet, let them be encouraged to listen to such rubbish, therefore only glorifying the true legends, as they should be.