Rangers Get a Little ‘Cap Room

The Rangers survived a war with Ottawa.
They survived the loss of Brian Boyle – to that point their most productive player.
They survived despite their top scorers, Callahan, Richards, and Gaborik going AWOL.
And now they face their postseason nemesis of recent postseasons past.
The Capitals and Alex Ovechkin have ousted the Rangers out of the playoffs in three of the previous 4 postseasons and here they are again. Worse yet, they have an unheralded goaltender in net – a commodity that’s always seemed to befuddle the Rangers.
This postseason however, has a very different feel to those of recent vintage.
For the first time, the Rangers are the home team, the high seed and the Capitals are the underdogs. For the first time, Alexander Ovechkin is not “The Great 8” but just a guy named Alex with a great shot and a gap-toothed smile.
Oh, and the Rangers have this kid….
Gaborik was still completely AWOL in game 1. The most invisible forward for the Rangers in the Ottawa series was Artem Anisimov and he delivered the first blow against Braden Holtby with a wrap-around try that careened into the net to give the Rangers an early 1-0 lead.
Not that big a deal in the series against Ottawa where the ice opened up quickly but the series with Washington promises to be one of impregnable defenses, deflected passes and shots, and scoring chances being few and far between. 1-0 could well be the final score of several games in this series.
The Rangers allowed the Capitals to negate the deficit with a beautiful rush and perfect feed and finish by Brooks Laich (look out for him in this series) and Jason Chimera with 5 seconds left in the period.
But the Rangers have this kid…
Chris Kreider has that rare blend of size and speed. 6’4, 240 with a great burst and a good release, Kreider has the measurables shared by Mario Lemieux, Eric Lindros, Evgeni Malkin and Alex Ovechkin himself. Obviously, any comparison short of size and speed at this point would be ridiculous to make. Still, Chris Kreider, other than Henrik Lundqvist, was the best skater on the ice yesterday.
The second Rangers goal, the winning goal (that’s two games in a row with the game winner by the way), was one that was the embodiment of what the kid can do. 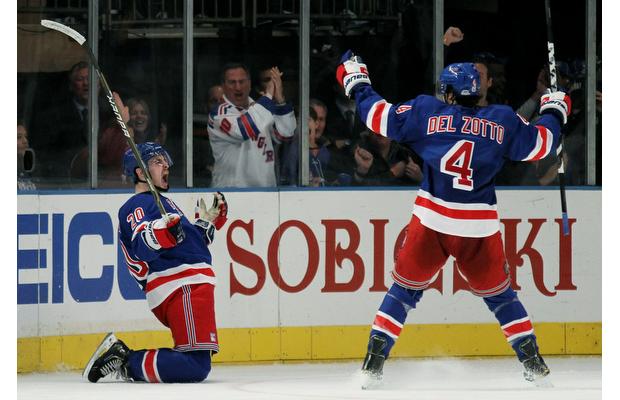 After contesting an Alexander Semin shot, the rebound kicked hard off the boards to Derek Stepan. Kreider took two strides, enough to blow past Roman Hamrlik to set up a break and a scoring chance that Kreider buried with a hard slapper; low-glove side, to re-gain both the lead and the momentum for the home team. Braden Holtby had been excellent so far in the playoffs but Chris Kreider made him look bad on that goal. It’s Chris Kreider’s third professional hockey game. 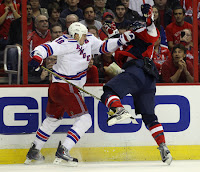 The Rangers will have a lot to watch out for in the coming games. This series figures to be a defensive clinic with blocked shots and deflected passes aplenty. The Rangers have always had to worry about the high-powered Washington offense in years past and their gameplan always focused on Ovechkin, Semin, and Mike Green. The game plan will have to be different this time out. Mike Green has regressed to the point that he isn’t even the top defenseman on the power play anymore (that honor belongs to Dennis Wideman) and Ovechkin has had his worst year as a pro. The players the Rangers need to watch out for are the guys that spring the scorers: Nicklas Backstrom, Jason Chimera, Brooks Laich. The men who do the dirty work that sets up the scores are the players the Rangers need to corral in this series because that is where the Rangers largest advantage lies.
They are the grittier team. They are better on the boards, better with their sticks defensively, more physical, and more willing to throw down the gloves. Whereas the Senators had Carkner, Konopka, and Neil to challenge the Rangers physicality, the Capitals can only supply the meager offering of Jon Erskine (who is a good physical defender but not a goon) and Matt Hendricks. This is the Rangers that the Rangers need to adopt the “bully” mentality for and rely on stars like Lundqvist and Richards as well as of course Kreider, to take care of the rest.
PREDICTION: Rangers in 6