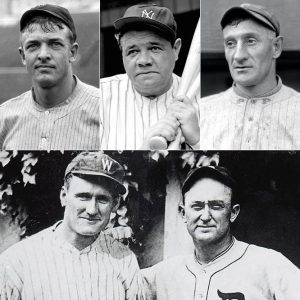 Previously, I posted a top-10 list for the greatest baseball players of all time. Obviously, many qualified candidates were kept off because the list was a mix of pitchers and hitters. A fairer representation of baseball’s greatest would be to set an all-time lineup (with backups listed as well) and pitching rotation. Here it is:

OF- Ty Cobb – It makes perfect sense for one of the most feared hitters and even more feared base runner would set the tone for this lineup.
OF – Ted Williams – Why NOT have the greatest pure hitter in the history of baseball (and undeniably the smartest) be put in a role where he hits situationally and sets the tone for the RBI guys.
OF – Babe Ruth – Duh
1B – Lou Gehrig – Greatest RBI man baseball’s ever seen. If it ain’t broke don’t fix it and Ruth/Gehrig 3-4 worked pretty well.
SS- Ernie Banks – 500 Home Runs and over 1600 RBI’s without much protection. Provides a nice bit of protection for Gehrig.
3B – Mike Schmidt – Schmidt is another 500 Home Run guy and a superb glove at the hot corner. 500 Home Runs at every slot in the lineup through the first 6 hitters so far (excepting Gehrig who would have if not for a fatal disease).
C – Johnny Bench – Bench would have made the list on defense alone but 2 MVP’s and a phenomenal bat make him just the next nightmare matchup in this lineup.
2B – Rogers Hornsby – He bat .400 and smacked 40 homers in the same season (only player to ever do that). Won two MVP’s, two triple crowns, and has the second highest batting average in baseball history. Rogers Hornsby is the greatest second baseman in baseball history.
SP – Walter Johnson – The Big Train is the Babe Ruth of pitching. He led the league in strikeouts more than any other pitcher, was the only pitcher in the 3,000 K club for 50 years, and is in baseball’s inaugural hall of fame class. He managed to intimidate even the unflappable Ty Cobb and possibly even more impressive, managed to win a title with the Washington Senators.

C- Yogi Berra – Staple of the Yankees dynasty, 13 rings, 3 MVP’s, 18 All Star appearances, and the most quotable player in baseball history with the possible exception of his manager.

1B – Hank Greenberg – Though Pujols gets consideration as well, The (REAL) Hebrew Hammer is a two time MVP, inventor of the first baseman’s mitt, and one of the game’s great sluggers.

2B- Joe Morgan – This was the toughest call on the ballot for me. Morgan gets the nod over Carew, Robinson, Sandberg, Alomar, Gehringer, Lajoie, Collins, etc. largely thanks to Bill James. Morgan dominated so many percentage categories: fielding, steals, K:BB, to go along with the big bat that he got the edge.

SS- Honus Wagner – This whole list is a joke if Wagner’s not on it. He and Cobb were the greatest players in baseball history until Ruth changed how baseball was played. One of the inaugural 5.

3B- George Brett – One of only four players in history with a .300 career average and 3,000 hits. Brett was one of the most feared hitters of the 80’s and played with a Charlie Hustle-type aggression.

OF- Hank Aaron – I will NOT explain this pick. If you have an issue with Hank Aaron making the all-time list on the BENCH. Feel free to comment

OF- Willie Mays – Never has there been a better blend of raw physical talents than in the body of the Say Hey Kid. The combination of average, home runs, fielding, and base stealing has never been equaled (Mike Trout’s a rookie, don’t start).

SP – Lefty Grove – Babe Ruth was famously bought for $100,000. Grove was bought for $100,600. He led the A’s to two World Series titles, was a 6x All Star, MVP, has the greatest win/loss record pct in baseball history and is ranked as the greatest pitcher in MLB history according to some stat-heads.
SP – Christy Mathewson – Matty’s name is incontrovertibly linked with Johnson’s. Though Matty was pitching slightly ahead of Johnson, the two were the most fearsome pitchers baseball had seen. Mathewson’s 1908 season is considered by many to be the greatest season any pitcher has ever had and his plaque in the Cooperstown reads: “Greatest of all of the great pitchers in the 20th century’s first quarter”
SP – Tom Seaver -As if winning a World Series with the Mets isn’t miraculous enough, Seaver’s accomplishments make him easily one of the greatest pitchers in baseball history. 300+ wins, over 3,000 strikeouts, a career era under 3, the fourth highest WAR amongst starting pitchers behind Walter Johnson, Cy Young, and Roger Clemens, and inducted into the Hall of Fame with the highest ever percentage of votes.
SP – Greg Maddux –  The Professor dominated baseball in the 90’s. He’s the first pitcher in baseball history with 15 wins in 17 straight seasons. He’s one of two pitchers to win four straight Cy Young’s during which time he went 75-29 with a 1.98 era. He has more wins in the live-ball era than anyone other than Warren Spahn, has 355 wins, over 3,000 strikeouts, and did all of it with below average velocity during baseball’s steroid era. Also widely considered the greatest fielding pitcher of all time. Note that his best seasons – 94′-’95 were strike shortened.