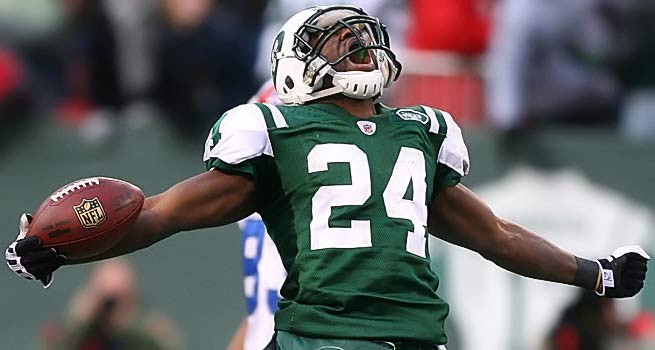 The talk in New York, when it isn’t about a make-believe-girlfriend or a lying bicyclist, has been about the possibility of trading All-World cornerback and face-of-the-franchise Darrelle Revis.
How can the Jets even talk about jettisoning their best (and only) marquee talent? How can the erosion of their one area of dominance possibly improve the team? Particularly when the only realistic return in a trade would be draft picks; drafts that the Jets have been bemoaning for years as bust after bust suited up in green and white.

The Argument Against Trading Him:

The Jets have one position on the field they don’t have to worry about. One position that, despite all of the issues they have with the roster, they can go to bed and not have to gameplan for. He’s the man that the General Manager drove out to a cafe outside of Cortland and essentially begged to return to camp. It’s his #24 jersey that the fans come out to the stadium in droves wearing.
In recent years, as the Mets have gone through their stretch of awfulness, the one “MUST” for the Mets was to re-sign their captain and marquee player, David Wright. While everything else went wrong with the team, their was at least the illusion of calm as the face of the franchise was there for the overhaul. Revis is the face of the Jets and as they go through another inevitable transition and re-building (GM Mike Tannenbaum’s been fired and replaced as has several coaches and Rex Ryan is next on the chopping block), he would be the marquee player that could infuse a bit of calm into the chaos of an overhaul.
That said, let’s say the Jets DO trade him. Let’s say someone offers a huge package for Revis, the opportunity to snag several draft picks (a’ la’ Herschel Walker). Even if it’s only a first and second round pick, the Jets would have the opportunity to add two first round picks and a couple of second rounders to their roster and plug up several holes, what in the world would make you think the Jets will instantaneously become good drafters? Why would years of drafting futility suddenly turn around? More to the point, what could the Jets possibly do in the draft that could top Darrelle Revis?
Revis allows Rex Ryan to tinker and play with his defense. Revis instantly halves the football field and coupled with Antonio Cromartie (who had a phenomenal season in Revis’s absence), can enable the Jets improving pass-rush to get the Quarterback.
The last and most obvious reason not to trade him is the basic rule of “buy low and sell high”. Darrelle Revis, the only true shut-down corner in the NFL right now, is recovering from an ACL tear. The value for Revis is lower than it ever has been and the bounty accrued in a trade for him would be negligible compared to what it should be. If Darrelle Revis is still Darrelle Revis, trading him at a discount is NOT a good way for new GM John Idzik to ingratiate himself to the fan-base. It’s also not the way for the Jets to rebuild.

The Argument For Trading Him:

When MLB Hall of Famer Ralph Kiner asked for a raise, the response he was given was “absolutely not. We lost with you, we can lose without you too”. As phenomenal an individual talent a healthy Darrelle Revis is, he’s a cornerback. The drop-off defensively with him injured wasn’t that great and even if it was, the primary issue for the Jets was offensive. They have several holes on their roster right now and a salary cap nightmare fast approaching. You want to slap the “untouchable” label on a cornerback who’s held out twice and is coming off of an ACL tear while you’re facing cap troubles? Even with Revis, the Jets missed the playoffs. Not saying he’s not the greatest at his position, he is, but how much of a difference does his individual talents or effort make when the team still finishes 8-8 and fails to make the postseason. Draft picks mean youth, draft picks mean cheap talent, and draft picks means that they can plug several holes. Offensive line, Quarterback, Running Back, Wide Receiver, Linebacker, Defensive Line…. these are all areas that need to be addressed quickly and cheaply. The only real chance the Jets have of doing that is to swap their one trade-able asset for some picks.
David Lee was absolutely beloved by NY and he’s proven to be one of the best forwards in the NBA. The Knicks would kill to have him on the roster now as he’s the perfect team player, can score, rebound, and pass. The Knicks were an abomination on the court and Lee served as the team’s lone bright spot. The one star that Knicks fans could hang their hat on and rally behind. Still, the Knicks let him go after his first All Star berth because the team, even with a great, young, and beloved player like Lee, wasn’t a winner. Darrelle Revis is admittedly better proportionately at his respective position than David Lee is at his but his position is also one of lesser importance respectively. The cornerback can take away one of 11 offensive players while a power forward is one of 5. Still, the principle is sound. If you can get some cap-room, get some youth, and plug some holes for a damaged cornerback who is not really helping you win, is there really a good reason not to?