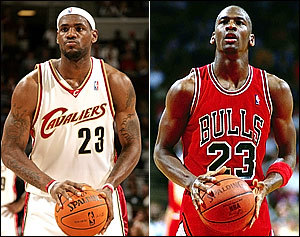 There aren’t many taboos in Basketball.
Fight in the stands – done.
Stomp on a cameraman’s testicles – Rodman took care of that one.
How about referencing a player’s dead mother/player’s wife/a disease the player has – Garnett’s done all of those.
The one taboo that has remained in Basketball is Michael.
NEVER
EVER
Question the greatness of Michael Jordan.
Don’t compare anyone to Michael, regardless of how identically their games and careers mimic his (Kobe). The legend of Michael Jordan, the lore of “MJ” carefully crafted by Nike and Gatorade, must never be brought up in the context of comparison simply because it’s blasphemy. There is no parallel to His Airness.
That grace period is officially over.
LeBron James is the single most gifted physical specimen the NBA has ever seen. 6’8 250lbs of pure muscle and power. The only man that size who could pass like LeBron can is Magic but Magic couldn’t shoot. Bird had the shot but his lack of athleticism and passing ability makes a comparison between him and LeBron nothing short of a farce. The Big O didn’t have the size LeBron has nor was he the all-around player (certainly not the rebounder) that LeBron is. Wilt was a stiff who could score and do little else and Bill Russel was the polar opposite.
That leaves one man left in LeBron’s path to greatest talent the NBA has ever seen. Michael.
The debate’s been everywhere recently. Who would win a game of one on one: Michael in his prime or LeBron?
I can already hear the groans. Nay, the scoffs.
“Michael Jordan is the greatest basketball of all time! No one’s as clutch! No one could score like he could! No one had Michael’s will and refusal to lose. ”
Yeah, but Michael’s not 6’8.
The reality is, Michael is not the greatest scorer of all time (Kareem and Wilt have that spot locked up). Most clutch- no one in their right mind would say that LeBron is more clutch than Michael. Few would contend that he has a better jump shot either. Here’s what LeBron has that Michael doesn’t – LeBron James is the body.
LeBron James has NEVER been stopped in transition. Never. (Seriously, try typing “LeBron stopped on Breakaway” into Youtube). He has developed a back-to the basket game at the same Hakeem Olajuwon-run summer camp that has given Amare’s career new legs. A post game that Michael Jordan has no realistic possibility of defending.

Michael has long been considered the best defensive 2-guard in NBA history. As Colin Cowherd very adroitly put it, that did not mean that Michael could go out on a given night and stop Gary Payton or Hakeem. He guarded the other 2-guards in the league, occasionally, Mike would throw a small forward off his game too.
LeBron James is a point-forward who shut down everyone from Derek Rose (the best point guard in the league at the time) and Dwight Howard (the best league’s best center). Back to the basket, face-up, perimeter, there’s nothing LeBron can’t do.
But none of that matters to you people does it? It’s still Michael.

Well then I’m gonna REALLY step in it now. If I were drafting an all-time team and I got to choose, Michael or LeBron, guess who I’m taking (hint: Mia Hamm never kicked his ass at sports in a commercial).

LeBron’s vision and passing ability for someone his size and with his ability to run the floor can only be described as Magic-al. That LeBron was able to take a team with Larry Hughes as it’s second-best player all the way to the NBA finals is unbelievable. Toni Kukoc, the Bulls third (maybe fourth) best player is better than Hughes was at his best. The mismatches he could create on offense, his versatility on defense, and the way he gets along with teammates (with the noted exception of Delonte West) is leaps and bounds ahead of where Michael’s was. His teammates respected him sure. They busted their asses so as to not let him down. But likeability? Michael was as difficult to play with as he was to play against (ask Kukoc). Don’t forget, LeBron plays in an era where zone defenses are once again legal. Michael never had to face that.

I’m not saying that at this point in his career, LeBron is the greatest player of all time. Michael is.
All I’m saying is that LeBron James was the best 27 year old the game’s ever seen. I’m saying that when all is said and done, he may well be the greatest of all time.
Most of all, what I’m saying, is that the conversation needs to be had. The debate needs to start. One that goes further than “but it’s Michael”.
Delete Image
Align Left
Align Center
Align Right
Align Left
Align Center
Delete Heading