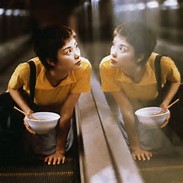 You never forget the first time you see what you believe as the most beautiful thing in the world. It kind of just stops you in your tracks, taking your breath away. Sometimes one doesn’t even realize what they are experiencing in the moment. I didn’t. That day it would come my way via the quintessential movie, spinning furiously in the glory of LaserDisc perfection. But certain things have this way of being imprinted in your life. It isn’t until the moments after that one begins to realize something is different.

In 1994, director Wong Kar-wai (Days of Being Wild) released a film that would undoubtedly leave its mark on audiences of the time and those in the future, myself included, fortunate enough to catch a glimpse of what would arguably become one of the most beautiful films ever made: Chungking Express. A movie so visually enticing that once it’s over, one will immediately want to take a trip back into the suspended wonder of swirling neon, pineapple and daydreams of a faraway place called California. There’s no need to scribble a boarding pass on a bar napkin in the wee hours of the morning just yet. Once you’ve seen Chungking, it never leaves you. You’ll never get it out of your head.

To describe the film simply cannot do any justice. Kar-wai’s work here is simply unmatched. To fully understand it, it must be seen. The cinematography of both Andrew Lau and Christopher Doyle is nothing short of precise. So much so that following the film, the real world can’t help but melt a little and slow down. Every moment to the next a dream in a frame all by itself, forcing the now enlightened to consider the picturesque detail of random meeting routine, or else risk having nothing further in life ever making sense.

Set in early 1994, the film revolves around two police officers who have both been unfortunate with love. Their stories break the film into two parts, beginning with the story of Officer 223, portrayed by Takeshi Kaneshiro. 223’s girlfriend, May, has recently broken up with him on April Fool’s Day, and struggles with the validity of the break up hoping May will return to him by his birthday on May 1. Simultaneously, a mysterious woman (Brigitte Lin) is conducting a drug smuggling scheme and a late night encounter brings the officer and this woman together, both of whom have already momentarily crossed paths with the characters in the second story. Officer 663, portrayed by Tony Leung, who is the focus of story two, has become so desperately lost in the depths of heartbreak after his break up with a flight attendant. He seduced (Valerie Chow) and begins to project his feelings of loss on the objects in his apartment, believing them to be the ones who are heartbroken.

Despite all this talk of love and breakups, let’s be clear, this is not some sappy romance movie. In the first half of the film, Brigitte Lin pretty much straightens this out.

The only solid connection between the two stories can be found at the Midnight Express, a fast food counter frequented by both officers. Each one having shared glimpses of their personal lives with the staff. The transition from one story to the next is by way of a young woman named Faye, portrayed by singer Faye Wong, who within a matter of seconds, directly links both officers.

An employee of the Midnight Express and the answer to the Brigitte Lin character of the first story, Faye is an endearing pixie cut wearing dreamer who not only leaves an impression on Officer 663, but on viewers as well. Wong’s performance easily makes her the standout star, and alongside Lin, provides the movie with one of its most memorable portrayals. What makes Faye so captivating is Kar-wai’s use of the character to embody what most people need after a broken heart: A change in the way they see the world around them. Faye’s altering of the routine life of 663 right before his eyes is pure delight. 663 may not immediately notice, but you will.

A masterpiece of setting and color, cramped into the hustle and bustle of Hong Kong, Chungking is perfectly lullabied by a distinct set of voices. The sounds are a mix of the distant glamour in the croons of Dinah Washington, the tropical jukebox rhythm of Dennis Brown, and the bewitching folk rock harmony of a remastered Mamas & the Papas CD single on repeat. One is left with an indescribable sense, an unbalancing in the beauty of what seems to be a perpetual dusk and never ending sunshine that will continue to paint the memory of the film in gorgeous splashes of color. Somewhere maneuvering in-between, is the mystique of Michael Galasso’s, Baroque, a dark and mesmerizing instrumental provoking the film’s lesson on just how intricately our lives cross paths with those of strangers. Yet we go on, never knowing what happens, or has happened, to the other person.

Perhaps what is most remarkable about the film are a handful of shots which depict the simultaneous slowing down and speeding up of time. Kar-wai places the characters in focus while the world continues at a faster pace around them. The effect leads viewers into the boundless depths of consumption of thought, an interim loneliness where the main characters briefly reside. If one were to dwell here in real life, only through reflection could its beauty be appreciated. Kar-wai’s translation of this is impeccable. His zooming in leaves time a blurry excess, a sometime adversary and ally in the passing moments that define our lives.

Chungking Express displays what we’ve been missing as we blindly go through life without stopping to recognize the details, the encounters and routines that however small, affect us and change who we are and how we see the world from one experience to the next. It shows us just how connected we all are in emotion and proximity. And it does this in the most beautiful of ways; by simply bringing life into focus.

It’s been a long time since I first saw this movie, and though I’ve seen it many times since, I’ll never forget the initial impression it left. I wasn’t expecting it. But as anyone who has seen Chungking Express can tell you, a lot can happen in one day.

And what a difference a day makes.