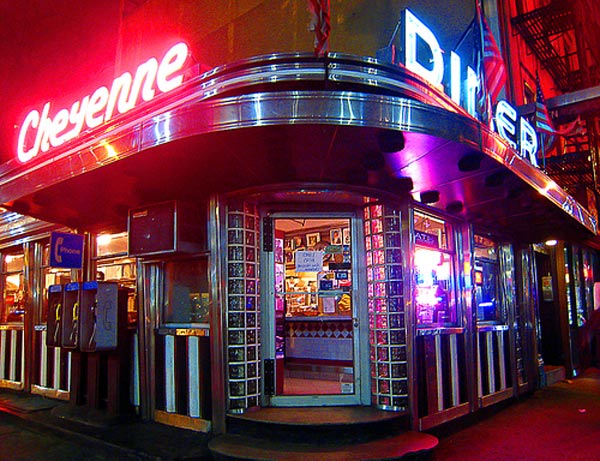 Like the theme of a favorite movie, the familiar never looks the same after one starts paying attention. Life’s defining moments have reoccurring habits, they always materialize briefly in unexpected places.

A reappearing act might happen when one is crossing the street.  A familiar corner will suddenly become a little bit more noticeable, as if one is realizing for the first time that the last building on the block is too small to be located next to a skyscraper. (Was this always like this?) Everything, now so abruptly straightforward. At this time place memory often has this way of resorting to disguises, like dressing up as 57th and 6th.

But I can’t be fooled.

Sundays changed at 9th and 33rd.

Weekend landscapes are sometimes adorned with apple pie, whipped cream, and hot chocolate. Diner delights that are preceded by ice skating in typical New York City fashion, 16 stories up in the air. The backdrop: the Hudson River, and a skating rink slogan repeated in laps. It reads something like, The Ice Never…, The Ice Never Melts…, The Ice Never Melts at….

Speaking of melting, memories do this, but sometimes without ever mastering the art of disappearing as swiftly as the physical thing which they seek to recreate. When they earn the distinction of outlasting them, those are the moments when you realize how quickly you’ve grown up, and that your perspective can no longer be the same. 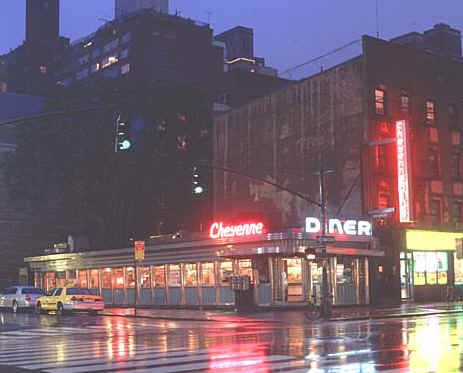 Several years ago I found myself standing at an intersection across from an empty lot that was once the site of an old haunt. During my childhood it had become a bit of a staple on Sundays, and as an adult returning to its very spot and seeing the space being primed for another building, quite possibly a high rise, was devastating to say the least. I remember just standing there wondering if my friend and I were in the right place. I had walked up and down this same block so many times before, but this time I was in a different story, I felt like a different person. The road between childhood and adulthood had just grown a little bit longer right before my eyes.

Cheyenne diner, a once “must go to” on Manhattan’s west side, had been part of what made weekends eternal. It stood on that lot for almost 70 years. It was a pretty place my dad and I used to visit about a block away from where we used to go ice skating.  At 8 years old, Sundays had the privilege of being never ending. They were light years away from Mondays, and made up of “ice,” stainless steel, and Art Moderne.

It would be quite some time before I would learn that the railway car design I had been so fond of had been sold and transported in two pieces to a field in Alabama, all with the hope of being put back together and reopened one day. You can never fathom something like that as a kid, though, that big things can stop being permanent and so easily disassembled. My 8 year old self might have translated its move to it retiring and moving to Florida, though it had always seemed like it belonged right where it was. Standing in the doorway made up of glass blocks with skates in hand, I couldn’t help but smile every time I walked through the door. It always seemed so much bigger inside. 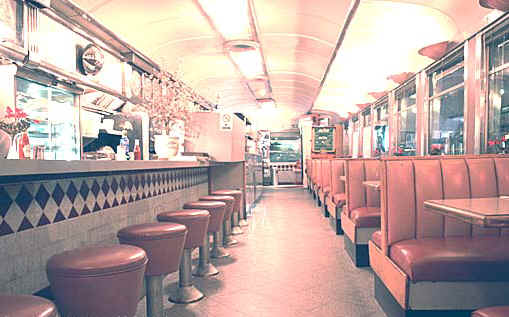 The day I found myself standing there with my friend, as luck would have it, was Saturday. Saturdays are still constants in matters of time, as they should be. I spent that afternoon reflecting on what had forfeited being real and would only exist from now on in my memory.

I reasoned that what I witnessed was just something to mark a change in the weekend landscape. Though I had been successful in ignoring it, Sundays had already changed. As an adult I had only been fooling myself before. Sundays had taken up this strange habit of walking in with a briefcase in tow full of reality. This wasn’t new. I can always hear it coming right before the sun begins to set. That 8 year old kid was long gone and priorities are different. It may have happened too fast, but at least it had a picture to go with it now.

One time, a few years before Cheyenne closed, another friend and I had spent a summer afternoon like typical teenagers, chasing one of our favorite bands around the city. We actually met them on the same block as the diner, just a few buildings down. For some reason I never even thought to go down there and pay this part of my life a visit. Other things seemed more important.

We grow up and we change, but the key is to not forget the people and places that meant a lot to us a long the way. The best memories, the ones that helped to define us just might show up later to help us know how we got here.

They are like old friends you haven’t seen in years.

They sometimes meet you when crossing the street.