The Scary Films for Kids That Inspired My Love of Horror 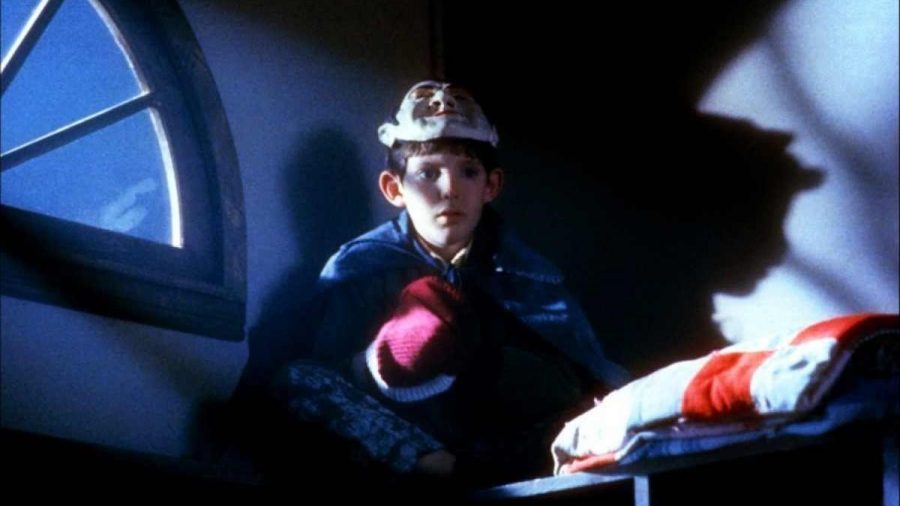 The idea that you could wish an annoying baby brother away and have him instantly taken by goblins intrigued me at a very young age. I had a few questions though, like did these goblins work as fast as they did on TV? Would I have to see them? And if so, exactly how many would be coming?

Most importantly, was I really going to feel that bad afterward that the little tyke might be turned into a goblin that I would feel obligated to go look for him in a confusing maze and ultimately face the Goblin King himself? I reasoned it really didn’t matter. I didn’t even have a baby brother, or sister.

I was the younger one.

I considered myself lucky. Though we had just watched the movie for the first time, I had made it to age five and my sister had never called on those pesky goblins. Or had she tried and failed? She knew everything so she had to have long known of those enchanted words used to summon them, the words that would fall under the same forbidden category as Beetlejuice, Beetlejuice, Bee… Obviously, unlike Sarah, she never got them right or I’d be telling a different story now.

Nevertheless, the idea of this handy little goblin service always stayed in the back of my mind. Just in case mom and dad made some announcement one day that some little bundle of joy was on his way to destroy my toys, I made a promise to myself. 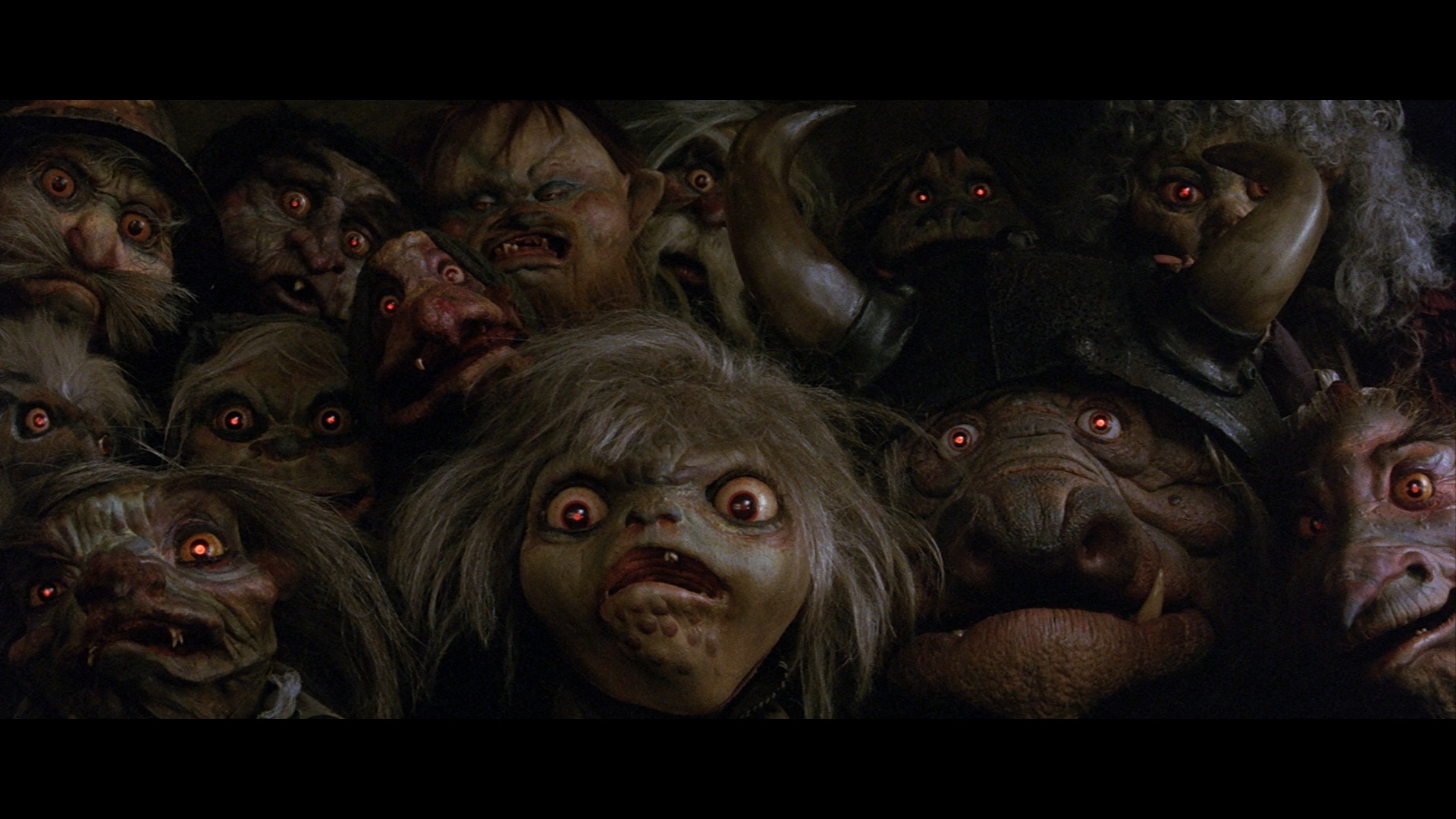 Cloaked in this kid friendly world of imagination meticulously adorned with familiar things, the best scary films tailored to kids were always seamless in their connection between the world on the screen and the one in real life. One world would always have a way of mimicking the other.

Whatever toys you had, the kids in the movie had them too. Whatever words they were saying to each other that their parents didn’t understand, somehow you instinctively knew this language. In fact, you thought you made it up.

These films were the perfect mix of charm, the unknown, and someone not much bigger than you and your friends saving the day.

There was one difference, of course, between you and them. Something had gone wrong for the kids in the movie. For some reason their world had started spinning in a different direction. The only thing you could do to help them get it back to the way it was before was to root them on from the other side of the screen.

They couldn’t hear you, but you just knew you had to do it anyway. It was kind of like The NeverEnding Story effect. Except, unlike Bastian’s case, in real life the two worlds would never meet. Hopefully.

The opening scenes of Labyrinth (1986) would be one of the first instances in which I would realize just how much I loved a good story with the right amount of scary. The perfect kid film could never be so frightening that it kept you up at night, but it was just enough to keep the covers over your head to prevent you from endlessly searching for the unidentifiable origins of oddly formed shadows.

Or, perhaps, to keep you from suddenly noticing a new figure in a painting who wasn’t there before. The Witches (1990) was a movie I absolutely adored. Still do as a matter of fact.  Though I may not have been hooked immediately that first time I began to watch it, one scene in particular would quickly change this. The moment when Luke’s grandma tells the story of Erica, known personally as the story of when I first became frozen with fear, would be replayed in my mind for many days to come. Spoiler alert for anyone who has NOT seen this almost thirty year old movie. The idea that little Erica had gone missing only to later turn up in a painting in her parents’ home was nothing short of disturbing.

But most of all it was clever.

How terrifying for the family, Luke’s grandma who had been her childhood friend, and audiences to watch Erica change her positions and live out her years trapped right before their eyes. And to top this off, no one ever saw her move. Ever?

What was also wonderful about The Witches was that it proved that scary wasn’t just about things going bump in the night. Atmosphere and attention to detail made films of this type full of pure wonder. The morphing of the witches into mice, and transformation of the Grand High Witch are stunning and confirm that no one seemed to better illustrate in kid films in general, the now forgotten art of meticulousness better than Jim Henson. Henson’s artistry as a puppeteer in many of these films supplied that tangible magic that computers will one day only dream of.

This attention to detail, especially in creating movie monsters for kids is one thing that can separate the films that are only pretending from the ones that are the real deal. Though there are many movies that say they take their stories and monsters seriously, they usually fall short on design and execution.

Thankfully there is usually one film around to show the others just how it should be done.

Underrated both in its ability to scare and its position as one of the best executed kid horror films, The Gate (1987) is one of a kind. It will take you by surprise. And not because it is so scary, though it is, but because of how well it’s done.

Home alone in a house full of so much color, you might actually become convinced that nothing scary could ever possibly happen, but just wait a little, Glen, his best friend Terry, and his sister don’t call me Al it’s Alexandra, are about to be paid a visit by something from the backyard. Or rather, the other side.

Unlike the story of Erica, there wasn’t a particular scene in The Gate that stuck out to me the most as a kid. This was because I think I actually heard it before I saw it. Once I did stop covering my eyes, probably after the third time, I realized that the entire movie was an adventure in imagery. Though I may not have put it quite that way at the time.

From a melting red phone, and a figure moving behind the house walls, to an awesome entrance by a multiple set of little demons, these are only part of what Glen, Terry, and Al have to contend with, and these scenes make up a small part of the film’s continuous gifts. I can affirm its generosity. That little issue that Glen ends up having with his hand is permanently stored on a shelf in my mind right next to one particular quote from the movie. It’s the one line that parents might enjoy saying just a little too much when they want their kids to think they’re in trouble.

Though you might have to tuck Labyrinth and The Witches to bed before you watch this movie, well, maybe not The Witches, what The Gate does share with these two films, however, is a reverence for its viewers. Not once does it cheapen its scares or dumb itself down for the sake of believing that its intended audience cannot appreciate what they are seeing. And it never loses its momentum either, because it doesn’t stop to question its audience’s existence.

Though The Gate provided plenty of scares, the one thing it did not have was an eerie little song that has the tendency to pop into your mind at no other time except when you are alone. It didn’t need one. But the films that have them are always a bit more haunting.

Long before there was an appreciation for “In Heaven” crooned by the Lady in the Radiator, there was the sweet rendition of a Bing Crosby song sung by the ghost of a little girl in a cloakroom. Instantly hitting home with aerial views of New York in the fall the beauty of which any kid from Westchester, and the rest of the state, can appreciate, Lady in White (1988) was a film that mastered charm and terror like no other.

Nestled inside the comforts of family, the excitement of elementary school Halloween parties, and the innocence of youth, the opening scenes following the introduction are arguably the most delightful in any Halloween movie to date.

Viewers will be quite comfortable before they realize that someone is keeping a secret in this postcard town and they are in for more than they initially surmised.

Despite a lot of twists and turns, the lingering image in the film is one of a ghostly young girl singing Crosby’s “Did You Ever See a Dream Walking” to an invisible acquaintance, while young Frankie Scarlatti who has been locked in his school’s cloakroom by two bullies, looks on. It is enough to give anyone nightmares, regardless of age.

Though what lurks beyond this for Frankie is best suited for a mature set of kids, and though the plot involving the lady in white gets a little thicker than it needs to, the film takes the utmost care in handling the recipe of what makes a good horror great. It’s exhibition of the annual pact between Halloween and youth is impeccable. In addition to these classics there were many other children’s movies that had a hand in inspiring my love of horror, one being Return to Oz, which is quite possibly my favorite kids film of all time, and of course no look back at kids horror could ever be complete without The Monster Squad.  Though many of the newer films do not possess what these had to offer, there are little gems like Coraline that come around every now and again and capture it so precisely.

What really made these films so good at what they set out to do was that the adults that were making them understood and appreciated the gift of imagination. They realized that kids could enjoy the fun stuff too.

Precise and exquisite in the recreation of our dreams and fantasies, these films are an homage to a time when the perspective and imagination of youth were put on a pedestal and cherished.

They were the very first ones that turned to you and coyly asked that age old question.

Do you wanna see something really scary?