The Life of a Klutz 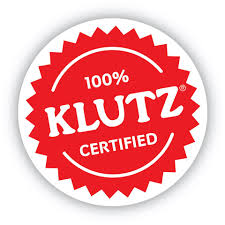 It all started when I was three years old and wanted to be Santa Claus. I was in the living room of my old home. I got a Shop-Rite bag and filled it with all of my mother’s books, but unfortunately the books were too heavy for me to withhold and I fell over. But it wasn’t just any fall. No, I decided to go the extra mile and accidentally fall onto Mom and Dad’s favorite glass table… head first.

My first moment as a klutz.

Next thing I know, my sister is screaming for my parents to come downstairs and I was rushed to the emergency room to get 12 stitches placed in my head. It was a nightmare, I was too young to remember it but from the stories I’ve heard, I was screaming scared out of my mind. Poor little three-year-old me was being held down by my parents, nurses and doctors so they can stitch my mistake back up. Only two good things came from this incident. One was that Mom and Dad took me to K-Mart and I was able to get a giant dollhouse. Second, was that I had a bad ass battle wound in the top right corner of my forehead that I was able to tell everybody about years later in elementary school.

Whenever I say something that doesn’t make sense, My parents blame it on the “glass table.”

Fast forward to elementary school. I was on a PTA basketball team that didn’t last very long considering I’m vertically challenged. Dad decided to sign me up for softball, I enjoyed it at first! I learned a lot in practice except for one thing, everyone forgot to tell me that once you get to a base you stop running. Welp! It was my turn to bat and I hit the ball! I ran to first base, then second, than third, then home – then first again, that second. Until my coach had to stop the game and tell me to get off the field, every parent was laughing but I didn’t know why. I thought I did a great job! I stayed on the team, I was a pretty good catcher, I never missed when it came to catching the ball. The only problem was I would catch it in the hand that didn’t have the glove on, I would run to Dad in tears multiple times a practice. He realized sports were not for me, he gave up his dream on having an athletic daughter.

But I had to prove him wrong. I wasn’t going to allow my clumsiness to get in the way.

Fast forward to middle school. In eighty grade, I decided to join track. It was an exciting time. I was finally a part of something. At my middle school, the coaches made us try every event to see what exactly each person was good at. My events were the 100m dash and the 100m hurdles. I was excited to do the hurdles because my older sister used to do them. I felt like I was living in her footsteps. The high school and middle school shared a track, meaning for a year, my sister and I would watch each other’s practices. This was the time I could finally look cool in front of my sister.

I cleared about three hurdles and was really doing a pretty good job until next thing I knew – I’m face first on the concrete. I quit hurdles once they started getting taller than me.

I still ran though!

High school came along and I ran track for all four years. I wasn’t the greatest but I for sure wasn’t the worst. I ran the 100m, 200m and 400m dash. The 400 was my best race, I was considered a mid-distance runner because I had endurance but with speed. My school had a track team of about 125 girls depending on the year, as you could guess practices got a little hectic. One day for practice we were doing a waterfall start. This is where no one has a specific lane. It was based on whoever got out the quickest and who was able to get around the other 15 girls you were running against . I was in the front of line with a row of girls behind me, the whistle blew and next thing I know I was on the ground getting yelled at by my coach because my teammates decided to trample me.

“TRETIN GET UP AND GO!” yelled my coach.

I was shook. I sprinted my little heart out and still managed to come in first out of my group. That’s what they get. I may have fallen but I got back up.

Speaking of falling, two years later in my freshman year of college, Me, my best friend and her family were all in Atlanta, Georgia by a lake. There was a trail big enough for all of us to run, we decided to race, with her mom filming.  It was a while since I ran last and I thought I was still able to go as fast as I used to, little did I know, my legs left from under me and I was in the gravel trail face first, stomach full of dirt and cuts all over.

We had this fall on video, not more than five minutes later my best friend posted it on her social media for everyone to see. I was the joke of the week, people still bring up that video of me to this day. “Hey Jules remember that video of you falling fast first?”

Yes… I remember vividly, thank you for the unwanted reminder.

I didn’t proceed to participate in sports during my college career. My school did not have a track team and clearly that was the only sport I was good at. That didn’t stop me from expressing my clumsy ways. My junior year of school and me and my roommates were getting ready for another night of drinking and fun. We were dancing around the room and I went to hop on my roommate’s bed. I hit the corner of my knee on the bed and fell to the floor in excruciating pain. My roommates were laughing at me until about five minutes passed and I still couldn’t get up. I had to be carried down to the car and went straight to the hospital that night. I stayed there for hours. They took x-rays and examined my knee as much as they could. The final diagnosis was a hematoma, since I’m not a doctor so I asked what that was.

“A bruise… you have a bruise,” said the doctor

“Oh….” I replied with the reddest face. I was so embarassed. I felt the eyes of my roommates staring at me thinking “This girl is DRAMATIC!”

I turned to them and said “This is a memory for the books you guys!” still embarrassed and as red as a tomato.

I went home with crutches that day and used them for about an hour then limped for the rest of the week. I swear my knee actually hurt!

I am graduating college next week and havent had an injury in over a year! Doing good so far! Knock on wood!

The one lesson I learned from all of this is:

After every fall, the only direction to go is up.

And since there is no physical graduation as of yet, I guess I can’t trip on the stage.