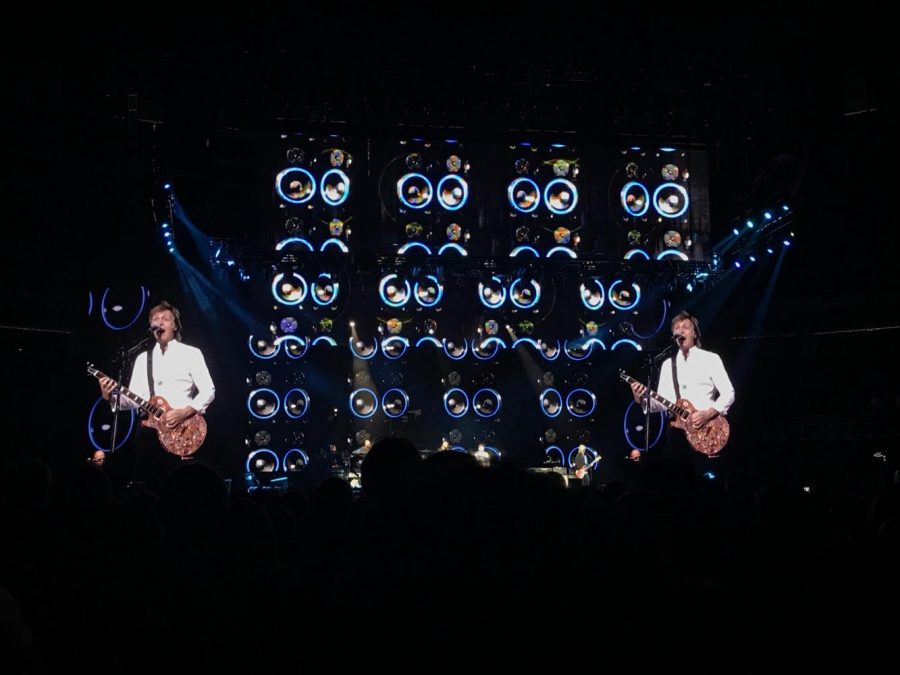 The Beatles are a major part to the soundtrack of my childhood. Listening to their music fills my head with memories of family dinners and celebrations, where the 60s band always provided pleasurable back ground music. A Beatles song was something you never skipped on the radio in my house.

And while I wouldn’t label myself as the biggest fan, I appreciate the way the songs hold my childhood memories and I appreciate timeless music.

This month, I had the honor of obtaining floor seats to Paul McCartney’s current tour, One on One. This was actually a gift for my significant other as he is a major Beatles fanatic, but it ended up being a gift for me as well.

In preparation, we listened to the Beatles station on Sirius XM radio every chance we got for weeks before the performance. His excitement brought up my excitement and it became something we both looked forward to.

Finally the day had come. The show was at 8 pm and we had plans to go to dinner at about 5 – until he got stuck at work. As we were leaving late with no time to stop and eat, I could see how stressed he was. He was stressed about work and that we were going to be late. I knew that once we got there, it would all be worth it.

After driving all the way to the Prudential Center in Newark NJ, we had to find parking and then wait on a long line full of people wearing tie dye and Beatles t-shirts, getting their bags searched and walking through metal detectors before we could take out seats. The suspense was killing us.

Looking around the huge stadium, I could see people of all ages and backgrounds. There were grandparents with their ecstatic grandchildren and people who have traveled across the country, all of them waiting to see Sir Paul McCartney. I also noticed that there wasn’t an empty seat in sight and I thought to myself, “Only a Beatle could do this after all these years.”

The inner journalist in me did some research before the concert, especially because I assumed that McCartney was the only living Beatle. That is when I found out that Ringo Starr is still alive, that McCartney is a whopping 75 years old and that his current wife is a Jersey Girl.

I figured at the age of 75, McCartney would sit down for most of the show and that his voice would ultimately be weaker than it once was. Boy was I wrong.

When McCartney finally walked out on stage at around 8:30 pm, the entire crowd started screaming and most people were holding up peace signs. This was a man that everyone in the stadium admired, and I was excited to be a part of that.

As the lights dimmed, the stage lit up with colorful graphics and pictures of all members of the Beatles together.

While McCartney sang some of his solo work and some songs from classic Beatles albums, the most touching was his song that he wrote after the great John Lennon passed entitled “Here Today.” It’s a song of friendship and unspoken words.

Before he began, McCartney stated, “This is for when you don’t say I love you to someone soon enough.” And the whole crowd went silent.

It was absolutely breathtaking, especially in a world full of so much hate, that one man could bring this diverse group of people together in harmony. There was only love in that stadium on that warm summer night and it was all brought to you by Sir Paul McCartney.

I left having a new sense of appreciation for music, the Beatles and McCartney himself. He may not be everyone’s cup of tea but he sure is an amazing musician. And you may be wondering about how my boyfriend felt – let’s just say he hasn’t stopped talking about it since.