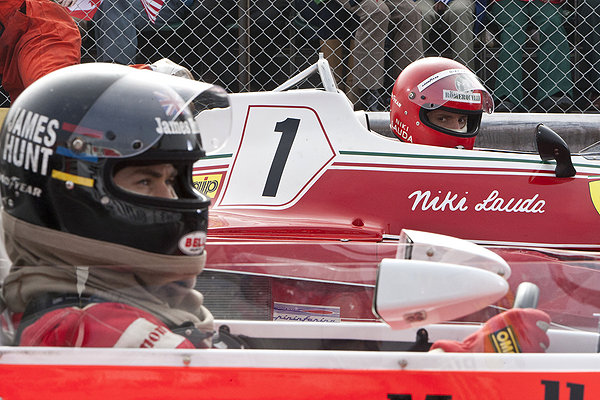 If you follow Formula One racing history, you know all about what happened during the 1976 season.

If you don’t, it doesn’t matter. You will still get a thrill out of “Rush,” Ron Howard’s storied film about the battle between British playboy driver James Hunt and straight-laced Viennese driver Niki Lauda. The story of that fateful season, when Lauda was defending his championship with Hunt hot on his heels, is exciting enough on its own, when tragedy strikes it becomes even more..

Howard, whose first job as a director was the 1977 Roger Corman-produced “Grand Theft Auto,” has captured what is surely the greatest racing footage ever shot. It’s not showy or corny or over the top. Instead it’s almost real, giving the audience a taste of what it’s like to be in the “little coffins,” as one driver describes the cars.

There’s something to that. As Lauda, played by Daniel Brühl, explains in a voice-over at the beginning of the film, Formula One was averaging about two deaths a year on the track in 1976. Hunt, played by Chris Hemsworth, later says, “The closer you are to death, the more alive you feel.”

Hunt, especially, is one of those live life to the fullest guys. He drinks, he smokes, he has a patch on his suit that says: “Sex, the breakfast of champions,” which seems like a pretty accurate description of his existence.

But man, can he drive, and when Lauda meets him. They take an instant dislike to each other. Lauda is from a rich family, but instead of becoming a banker, he drove his family crazy by driving cars. Very fast. He is as careful as Hunt is spontaneous, poring over every detail of his car. He doesn’t have friends or a social life. He has racing.

Lauda wins the Formula One championship in 1975; it seems expected that he and Hunt will compete for the 1976 title. Along the way each gets married, Hunt to model Suzy Miller (Olivia Wilde), who would eventually leave him for Richard Burton, which tells you the crowd these guys ran in. Lauda marries Marlene (Alexandra Maria Lara), even though he tells her up front he’s not going to put much effort into the romance of it all. Racing was his romance.

The film is suited up with romance, adaption, and well racing. The results are horrific. Without going into too much detail, do it to say that a gruesome accident will change the course of the season dramatically, but also lead to an inspiring rehabilitation and comeback that is hard to believe and kind of watch through the film.

Peter Morgan’s screenplay is thin in places, particularly when it comes to women. And other drivers are mostly just props, straw men for Hunt and Lauda to mow down on the track.

But Hemsworth and Brühl are outstanding. Their story is what drives the movie, two men different in every way except for their willingness desire to win. Which, of course, makes them more alike than they would ever want to admit.