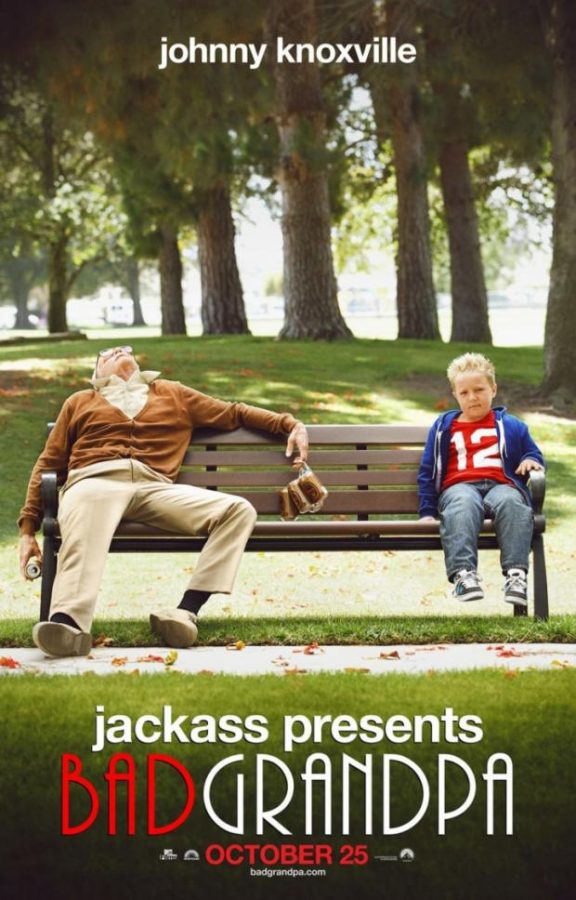 After several pointless, plotless, yet funny movies, a TV show, and even a video game about a bunch of guys performing completely idiotic and dangerous stunts and pranks for our amusement, we finally get a Jackass movie with an actual and legit plot (along with some more pranks of course!)

The result: a very funny movie that is guaranteed to make you chuckle plenty of times throughout, just as the previous films did! Johnny Knoxville as the title character is undeniably funny and amusing the whole time! His grandson Billy (Jackson Nicoll) brings just as much humor to the table as well. It also turned out to be unexpectedly heartfelt at times between Irving and Billy.

There are times when it seems several of these surprised viewers must be plants, and you do find yourself questioning the legitimacy of some of these “candid” moments. Still, it’s funny as hell. The range of reactions from the amused to the utterly horrified. It’s amazing how much craziness people will put up with until they’ve finally had enough.

As we learn through Grandpa’s account to horrified witnesses, the old man is ready to party like it’s 1899 after the death of his henpecking wife Ellie (Catherine Keener). Problem is, Irving’s daughter is headed to jail for drugs, forcing him to take a cross-country trip to drop 8-year-old Billy off with his slacker toker son-in-law, Chuck (Zia Harris). That still could be feed for a collection of random sketches, the format of the previous three Jackass films. Yet Knoxville and Nicoll stay so in character throughout Grandpa that, by films end, our heroes have mustered some dramatic tension.

Of course, laughs still rule Knoxville’s world, and he finds doozies here, beginning with his wife’s memorial service before a handful of funeral home employees and onlookers suckered into the program. If Candid Camera creator Allen Funt was TV’s practical joke king, Knoxville has become cinemas. He sees humor not in the punch line, but the reaction to it

Yet it’s Grandpa’s heartwarming scenes that make it shine. Strangers who criticize Grandpa for giving the kid a six-pack for breakfast, dropping f-bombs in front of the boy and leaving a child downtown while he hits the strip clubs. As Billy, Nicoll is terrific, remaining innocent as he questions grown-ups about strippers or why his mom’s breath smells like crack cocaine. Nicoll, who made his debut as Christian Bale’s son in The Fighter, is comedic gold.

Still, the movie’s best moment is honest, not snarky. Near the finale, as the actors link-up on a seedy bar for the custody handoff, we meet Guardians of the Children, a real biker gang dedicated to assisting abused youths. Knoxville clearly meant to anger the gang, but he could not have expected the group to not only feed the kid, but threaten the boy’s troubled father that, if he harmed the boy, he’d be facing “the angel of death.”

You come to legitimately care about Irv and Billy and are invested in how their journey together turns out and if they can work out their relationship.  Knoxville and Niccol have great chemistry together, the movie simply wouldn’t work if they didn’t. Niccol is a real find. He seems like a real kid rather than a “movie kid.”  The film could not be any more inappropriate, but it fits and it gives you that feeling of joy knowing you’re not partaking in what Knoxville and Nicool are doing charismatically. The Jackass gang strike again with the increasingly amusing Bad Grandpa, featuring Johnny Knoxville’s Irv Zisman at his most gloriously inappropriate ‘’fake’’ grandson. ***/5