Splurging has a Cost

Money doesn’t grow on trees, so why do I spend it like it does? The older I get managing money has become more and more difficult. I would rather eat out than cook dinner, take a cab instead of a bus, and when it comes to shopping nothing can stop me from swiping my card.  Years of earning and spending, has taught me that splurging has a cost.

I started working when I was fifteen. Like many fifteen year old, the motive behind your first job is to earn money for shopping and hanging out with friends. Senior year of high school, I got my first part-time job at Abercrombie & Fitch. My intentions for working during my senior year were to start becoming independent. I slowly began to learn the importance of saving, paying bills and self-control. I was making enough money to pay my phone bill and the rest went towards my prom dues. When my prom dues were paid, I fell off the savings wagon and began to spend my money as I earned it.

Anyone who knows me, knows shopping is my weakness. Splurging is my form of therapy. When I walk into a clothing store my mood automatically changes. I leave my problems at the door and my tension is relived the moment I swipe my card. Although shopping keeps me mentally healthy, it keeps my bank account unhealthy. My family has attempted in numerous occasions to talk me out of my splurging addiction. They even threatened to take me to Shopping Anonymous. But like every addict recovery is not an option until the person realizes they have a problem.

I have always known my splurging addiction would catch up to me. Every time it caught up a little, I would tell myself “no more.” When my funds would refill, I would spend it all over again.  After five years of reckless spending, I learned the value of a dollar. Pennies, quarters, and singles eventually add up. In the long run spending money on expensive clothes, food, and cabs unnecessarily leaves you broke and stressed. I was so concerned to have instant gratification when swiping my cards spending money became a cycle.  I needed to find a balance between my needs and wants.

I never feared the word budget, until I saw my bank account funds categorized and detailed. A few weeks ago my cousin recommended an application called MINT. The app is specifically for money management. After downloading it, with your permission it links your bank account to the app in order to analyze your funds and spending. I told myself eventually ill download it and see what it’s about. It wasn’t until she explained to me how helpful the app was for her wallet. After she downloaded the app she realized she had spent over $100 a month on coffee. Hearing this, I was curious to see where all of my money was going.

The application organized all of my earnings and spending individually. I was in for a rude awakening when I opened the application. Splurging had a cost and I was about to witness it firsthand. The summary of my expenses for the month of March, were outrageous.  I spent $480 on food and dinning, $419 on Health and fitness, $186 on transportation, $250 on shopping and over $250 that were not categorized. I was in disbelief when I realized how uncontrolled and unaware I have been with my money.

Within my moment of disbelief, I became confused as to how I managed to spend so little on clothes and so much money on food. That’s when I realized five years of binge shopping caught up to me. There were no more clothes left for me to buy. Spending money on food and restaurants were my new addiction. I treated myself too often to luxurious meals, smoothies and expensive salads. It all had to come to an end, if not eventually I would become hungry and broke. 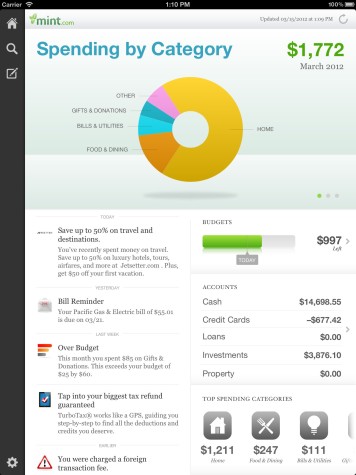 I am not one to penny pinch, but after realizing I had no regard towards the value of a dollar, I needed to become wiser. After my epiphany I organized the application to divide how much I spend, according to how much I earn. The wonderful aspect of this app is the ability to set yourself a monthly budget to the last penny. It was painful to make a budget but it was necessary.

Of course I had my doubts on how dedicated I would be managing my money though an app. It’s as simple as a delete button, which could get me to ignore my new budget and relapse. Instead of neglecting change I set alerts on the application. The alerts are sent to my email, and I am warned before I go overboard on spending over my budget.

Countless years of spending, unaware of responsibilities I took the initiative to change bad habits and create good habits. It pains me to walk away from clothing stores, and going straight home after work for a home cooked meal instead of making a stop at a restaurant. Practicing self-control with money is a challenge. I would have never realized I needed to become an adult when it came to my finances until I saw personally how spoiled I have been for so many years. Splurging has a cost, treats are earned not given, needs and wants are not the same, and being wise with my earnings will prepare me for the future.