No More Excuses For Lebron James and Miami Heat 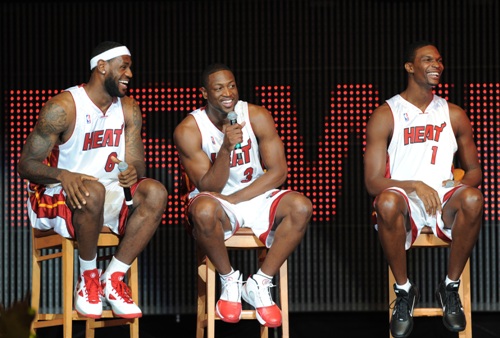 The NBA has started out in strange fashion around Christmas, so it’s only fitting that it ends the very same way. The playoffs began this past weekend and there were truly no surprises, we have only been reminded one things; the east is extremely weak and the path is laid before King James.

Some say the pressure is only ratcheted up given how easily they dispatched the Knicks and the unfortunate injuries from other important players- former MVP Derick Rose is gone forever as it relates to the playoffs and  young perimeter defender Iman Shumpert is done with a knee injury as well. Not to mention top five point guard Rajon Rondo might be suspended anytime now.

If Rondo is in fact suspended for game 2, the Hawks will undoubtedly go up 2-0 in that series and the Celtics will have wasted a chance to steal a road win from a solid home team like the Atlanta Hawks. BTW I’m I the only one who thinks that Rondo might have indeed tripped in to the referee and the awkward chess bump was a result of his embarrassment. No one looks tough tripping on his own feet but when you add a chess bump, that changes things.

So with that, the Celtics go down two games and the Bulls find a way to beat a starless Philadelphia team, a team that plays their little hearts out but fall short due to lack of scoring and dynamic guard play. Which leaves us with the Indiana Pacers.  I truly expected more from this team and I wonder if they even got up for that game against a reeling Dwight Howard-less team. In fact, I take that back- I wont make it that easy on them. They came to play, played hard and lost. That’s my fault for expecting a lot from a team whose go to player is Danny Granger, a player who is more of a second third option than a player who should control the ball in crunch time. Indiana will most likely win this series against the Orlando Magic but that’s as far as they will go. They can’t compete with the Bulls without Derick Rose or an aging Celtics team with or without Rondo. The way they are seeded, Indiana will never get a chance because they face Miami next but I wish the would provide more of a challenge. I doubt the will.

I wonder which team will provide a better challenge for the Heat in the eastern conference Finals. The Celtics demolished the Heat earlier this season but I don’t see that happening in the playoffs. The Bulls beat Miami without Rose this season as well but I’m reminded by last seasons playoff performance by Lebron against the the Bulls. Last season, they also beat Miami but that meant little in the playoffs and that was with their MVP, what happens this year without him and a motivated Miami; especially a motivated focused Lebron. They have no shot.

So there you have, I’m hoping for a Celtic Heat eastern conference final I guess- not because I like the Celtics, in fact I hate this old brittle bunch but it would make things more interesting.

Winning the east, will and should be easy enough for the Miami Heat but that is where the paved road ends. Whoever they face in the finals will be a tremendous upgrade in opponent compared to who they have seen thus far. This will not be a coronation for King James although it may look that way right now.