The Sulk Heard ‘Round the Word 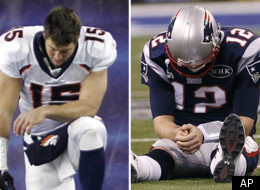 Move over Tim Tebow, Tom Brady is taking over the “sport-light”.

First it was “Tebow-ing,” the bowing down to God in random places idolizing Denver Broncos’ young QB Tim Tebow.

He is known for being a very religious player, and for still being a virgin. The Florida Gator graduate was drafted to the Broncos in 2010 and was a 24th overall pick to the Denver Broncos.

Before each game and after each touchdown, Tebow would bow down and pray and say how thankful and blessed he is to be a part of the team. This action has become known as “Tebow-ing.”

People have taken it upon themselves to randomly “Tebow” in places, take a picture, and upload it to, yes…the Tebow-ing website.

The website is www.tebowing.com and there are hundreds of pictures of kids, adults, and newborns “Tebowing”.

This has been going on for the entire season and though unfortunately, the Broncos season came to an end in the playoffs, but the “Tebowing” still continues.

The Super Bowl was right around the corner, where Eli Manning and the New York Giants took on Tom Brady and the New England Patriots.

For the most part it was a boring game I believe, and I personally hate the New England Patriots. I think they are a bunch of sore losers, and a bunch of babies. It’s like they all “Tebow” quarterback Tom Brady before each game.

Seeing Tom Brady act like a two year old child, sulking in the middle of the field watching his hopes and dreams of winning another ring go down the toilet was the highlight of my football season.

The new trend that’s sweeping across the nation is now “Brady-ing,” the sitting down in a random place and hanging your head down low, in (dis)honor of the New England Patriots QB Tom Brady.

I find it amusing that when Brady got sacked at the end of the game for the Giants’ win over the Pats’, he just sat down and hung his head like he was pushed to the ground on the playground and someone stole his lunch money.

The picture of Brady doing this was all over Facebook, Twitter, and even local newspapers. Brady’s crying did not go un-noticed.

No, this action is not unknown by people because it had gotten a website of it’s very own.

The website is called www.bradying.com. This website has the same purpose, and the same layout as www.tebowing.com.

However, to many, the action of “Bradying” is a mocking of their Quarterback losing the national championship to the New York Giants.

My thoughts? Who cares?

If you’re always in the public eye, there is always going to be some type of mockery based on your reputation.

Creator of www.bradying.com, Jared Kleinstein stated, “Tebowing isn’t just a meme with pictures on a website; it’s become a way to unite the Broncos fan base, and to show support for Tebow no matter where you are in the world.”

There is no say in whether the “Bradying” sensation will last as long as the “Tebowing” one, but personally I hope it does. Maybe Giselle will see that she doesn’t only have a two year old, but she is married to one too.