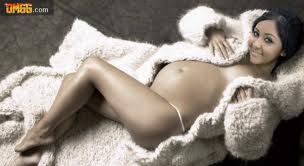 Nicole ‘Snooki’ Polizzi, star of the hit MTV show Jersey Shore, which is shockingly in it’s fifth season, can’t be getting “wastey-pants” for two, because she is reportedly three months pregnant with boyfriend, Jionni’s, meatball.

Take your time to barf.

I just want to remind everyone that Jionni LaValle appeared in Jersey Shore before Snooki started dating him. She picked him up one night from the bar the cast partied at that night, brought him back to the house, and “smushed”.

But Snooki didn’t remember his name.

While in bed, he kept saying to her, “You don’t remember my name,” and she kept assuring him that she did. When asked what it was she responded, “Bernard.”

Not only did she not remember his name, she hooked up with his cousin two episodes later.

What a hot mess.

Also, do we not remember the tabloids a few months ago commenting on her drastic weight loss? What is she going to do about her weight now?

Even though season five of Jersey Shore is still on air, Snooki and Jenni “JWoww” Farley, are starting up a spinoff. The best friends moved in to an apartment on Mercer Street in Jersey City, New Jersey.

But the two fake Italians are not going to be the only two on the show. Snooki is carrying her own little meatball.

“It’s going to be me and Nicole living in a house: our ups and downs, and our relationships with our boyfriends who we love dearly, our families — who are just insane! — and our friends who you really don’t get to see on [Jersey Shore],” Farley, 25, said during a recent visit to Us Weekly’s New York City offices.

Viewers will see a different, more reserved side of the two stars, Polizzi promised.

“We want it to be different than Jersey Shore, so it’s not always going to at the club, drinking and partying,” she said. “It’s the first time I’m going to be on my own for real. You’ve only seen the party side of us.”

That’s for damn sure, seeing how Snooki’s not going to be able to drink or smoke.

Can she do it?

However, the couple didn’t come out in the open about the pregnancy when it was first gossiped about.

Snooki confirmed to TMZ in February that she was carrying boyfriend of six months baby.

The 4’9” star has built her name upon her Jersey Shore antics—skipping work, flashing her panties, getting arrested—most often with the lubrication of liquor. She’s lined her pockets with endorsement deals for energy drinks and diet pills—definite no-no’s for a mommy-to-be.

I’m definitely expecting an extreme submission of hate mail to the reality star, and it’s not going to be guidette problems.

Snooki was quoted hoping “to be the next Kourtney Kardashian.” First off, why the hell would you ever want to be that? She doesn’t want to marry her baby daddy. Snooks said after day one of her dating Jionni that he’s “the one”, and wants to marry him after he made her pickle pancakes for breakfast.

Even though the news is out and about around the tabloids, MTV is remaining hush-hush about the news, but according to the Post, the news panicked MTV execs because a pregnancy means sweeping changes in the already in-production “Jersey Shore” spin-off that stars Snooki and JWoww.

So it’s okay for MTV to put already unprepared pregnant teenagers on television, but it’s not okay for one of their biggest reality TV stars to get pregnant as the show is being filmed.

But I thought she wanted to be just like Kourtney Kardashian? She announced it while the show was airing.

I can only imagine that the baby is going to come out fist pumping.