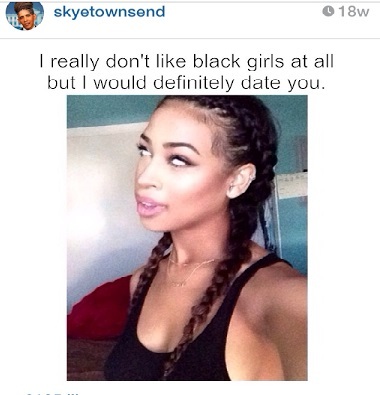 Earlier this week, I came across an article from  the Huffington Post boldly  entitled, “Black Men Don’t Like Black Women”.

At first glance, I rolled my eyes at this headline, but with the help of some Twitter buzz, I decided to go ahead and read the the article in it’s entirety.

I already had my preconceived notions that’s this article would lack valid points with such generalizing title. But even after reading it, I was still greatly disappointed.

For one, I don’t know whether to be more upset with the weak grounds on some of the points made or all of the careless grammatical errors.

If the author, Courtney Carter’s intentions were to defend and uplift black women while showing and proving how all black men have turned grown disdain for black women in a credible manner, then it was poorly executed through this article.

In the very beginning of this article, Carter states:

“I am intelligent, not what society deems “ghetto” and from what I am told and from where I work in the television business, I am attractive.”

Instantly, she separates herself from the stereotypical figures that society makes black women out to be.

After expressing her confusion on why black men do not appreciate black women through weak stereotypical points such as “wearing weaves and clip ins” and “having too much attitude”, Carter pretty much ends off the article saying:

“I know I’m an attractive female with a lot to offer. I have a degree, two actually, including a masters. I am intelligent, can hold a conversation and come from a background more like The Cosby’s then the PJs (do you remember that show? I digress…) I know how to cook and I am known for being ‘everyone’s cheerleader’  (supportive).”

Carter fails to recognize that black women are complex individuals, like many people of many races. She continuously refers to the stereotype of black as if it is a mold or standard for us.

Another huge part of Carter’s article discusses a heated debate about black men vs. black women with her her biracial (Black and Puerto Rican) boyfriend.

She speaks about a conversation that they had about the texture of the child’s hair. He ‘lightheartedly’ says that he hopes their son will be born with his hair because he sees how much she struggles with dealing with her own coarse hair texture.

Carter goes on to say:

“My boyfriend has beautiful soft curls, a genetic gift from both of his races.”

It was at this point in the article where  I regretted reading this.

As a black woman myself, I won’t act as if even I haven’t seen cases that Carter refers too. On social media, I’ll come across hurtful jokes and remarks at the expense of black women that are often made by black men. I can even go as far as saying that Carter had one valid point when she referred to an article on Psychology Today claim that black are scientifically uglier than women of other races.

However, I won’t go as far generalizing all black men to have turn their backs on blacks women.

Carter attempted to show how under appreciated black women are to black men when ironically enough, it seems as though that she doesn’t understand black women herself.

If the name of the article was changed to “My boyfriend said something about my coarse hair and my feelings are hurt” or ” I’m nothing like these other black women, I deserve a good black man” then maybe this article would have made more sense.

The bottom line is that if this is her opinion I’d have no problem with it, because we are all entitled to our opinions, but presenting an opinion as fact with no reasonable means is an opinion that I can’t respect.

To read this article word for word: http://www.huffingtonpost.com/courtney-carter/black-men-dont-like-black_b_5973030.html