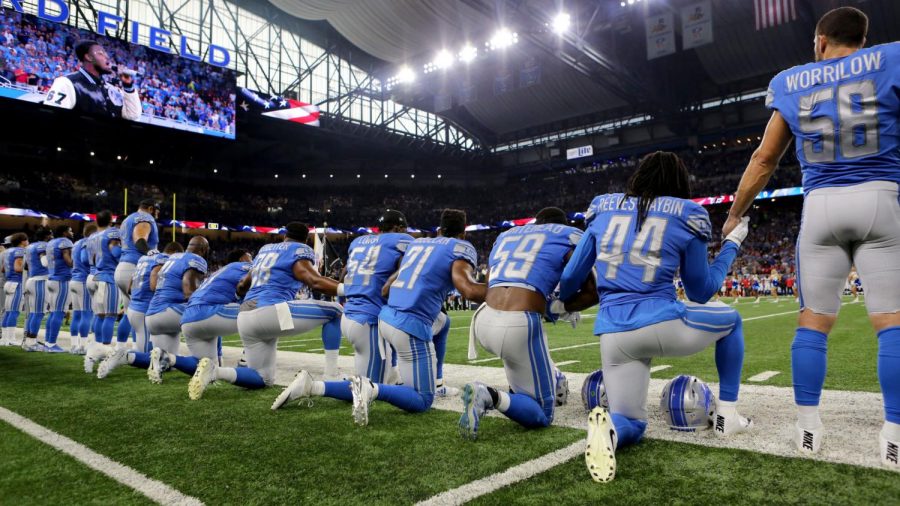 Recent events involving the NFL, President Tr*mp, and peaceful protests have made waves in the media and all throughout the country. While no one is interested in reading a long, rambling think-piece on “Why the NFL Protests are Good” or “Why the NFL Protests are Bad” it is important to analyze the situation in a logical way, presenting the facts in order to understand the situation that is at the core of this latest national controversy.

What began with former San Fransisco 49ers quarterback Colin Kaepernick taking a personal stance on the issue of police brutality against people of color, has resulted in the long, tumultuous road to what has occurred just recently within the NFL.

At the core of this issue is the fact that POC (people of color)  currently living in America are not afforded the same sense of safety and security as their fellow white Americans. Players who have united in solidarity with each other in continuing Kaepernick’s sentiments are not out to disrespect soldiers, or a song, or a piece of fabric meant to symbolize freedom. What people who are offended by these protests fail to recognize is the fact that the “freedom” and “rights” that these national symbols stand for are exactly what POC are literally and figuratively dying to achieve.

No, we are not living in an age of slavery and law-enforced segregation, but there still exists a monumentally grave problem involving black American citizens and the way that they are repeatedly treated when in contact with police–enforcers of the law who are meant to protect and serve American citizens.

Why do we not have this same outrage at a football player disrespecting a flag as we do when a black teenager is shot and killed for walking down the street at night wearing a hoodie?

Why is the thought of peacefully and respectfully choosing not to participate in a tradition that is meant to pay tribute to the so-called freedoms we are granted as Americans more of a controversy than the nationwide issue of police brutality?

Another element of this issue is the argument that during a football or other sporting event is not the correct “time or place” to protest. Expressing opinions such as wanting to keep sports and politics separate are a clear example of privilege in action. While you may be afforded the privilege of separating political and social issues from your leisure activities, POC do not have this same liberty. Whether you are Colin Kaepernick, Alton Sterling, Florida State Attorney Aramis Ayala, Chris Rock, or Neil deGrasse Tyson, if you are black in America, you cannot separate politics from any sphere of your life.

It appears that nowhere is the correct time or place for such demonstrations to occur, as far as those in opposition have revealed.

It is noble to want to keep sacred the traditions of American culture. It does not make you inherently bad if you find yourself agitated or annoyed that a millionaire sports figure is exercising his right to protest something he deems fundamentally unAmerican. It should, however, cause you to think about what inherent biases you may be carrying that do not allow you to see past the physical action and understand the underlying cause of why these protests are occurring.