The "Twilight Zone" of the Hospitality Industry 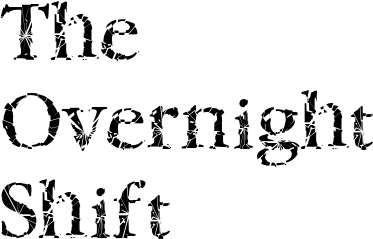 The entire day, when tasked to overcome the “graveyard” shift, is just for a lack of a better word different than all the other shifts.

It starts at home where my phone’s alarm begins to sound off at 8:00. Then 8:05. And once more at 8:10. The difference from most days? The alarm going off in the PM and not the AM. A good night, or is it day in this instance, sleep is key when working the overnight shift. After rising roughly at the same time the sun is setting I go about my morning routine as per usual, only in the evening.

I mistakenly and groggily say “morning” to my mom and pops and deciding to keep up the ruse I ask them “so what is for breakfast?”

Sidebar to the whole overnight shift can I just dedicate a few words to my parents. My mother after working all day at one of the only jobs you never clock out of, wife and mother still has enough time out of her extremely busy day to pack me dinner for work. As for pops, after working eight hours day 40 hours a week as a construction worker you would think the last thing he would want to do is essentially be his son’s chauffeur. But he does not mind. He never minds. They just want me to succeed and will do whatever they can to make sure I do. For that I love you guys and as Kevin Durant said in his 2014 NBA MVP speech “You the real MVP.” Now back to our regularly scheduled column.

You remember what I said about our uniform one of my previous columns? Well, like everything during the overnight shift, throw what I said out the window. For starters, sneakers. I love me a nice polished pair of loafers as much as the next doorman, but you try wearing those towards the end of a grueling shift. So many footbaths to avoid blisters. Shirt? Untucked just like my tenant who threw up in my last column. Tie? Definitely optional here. Huh now to think of it would probably be best to make sure you have read those columns before reading this one. Or not. That works too.

The lighting in the lobby to my building is very important. Always so bright and inviting from afar. Highlighting the yellow wallpaper and giving the lobby an overall shine to it that has many tenants, relatives, guest, workers, and passersby’s stop and stare in its beauty. Now with that being said, the lights are completely off during the overnight shift with only the glare of the computer and my phone screen as the nights light source.

All seems normal if that is what you want to call it until the daughter of one of my tenants comes in. She is no older than me and begins sobbing hysterically in the lobby.

“Do you want me to call your mom?” I ask

“No I just need a minute,” she responds

“Oh… okay,” I remark as I go back to the YouTube video I was watching.

“It is just that…” she begins

So you do not even have to be a boyfriend to still get hit with the “it is just that…” followed by a monologue. You just have to be an overnight doorman. Noted.

I listen to her complain about her boyfriend I think? I really did not care, for the next 20 minutes as she stumbles across her words. Maybe the three wise men had something to do with that: Jack, Jim, and Johnnie.

“You are such a good listener,” she says as she grabs my knee.

She proceeds to go in for a kiss and out of instinct I put my hand in her face looking like the trophy awarded to the best college football player yearly.

“I am going to call your mom now,” I say as she agrees while hiding her face in shame.

Her mother comes down a few minutes later. She apologies. We laugh it off and I help bring her daughter to the elevator. Just as the elevator door begins to close her mother says;

“Let me guess, she tried to kiss?”

I laughed, but all I could think is “how many times has this shit happened?”

As the drapes that cover the sky begin to raise that means that I have survived another overnight shift. I showered my face with tiny pools of freezing cold water created by cupping my hands as my final jolt to push me through to the finish line. After rubbing my, for once not due to marijuana, red eyes I hazily make out that someone is on their way in. Someone, we are all too familiar with at this point.

“You wanna know how my night, well technically morning according to you, was?” Greg says sarcastically.

“It was… actually amazing thank you for asking that is so kind of you,” he says to my utter disbelief.

“Well, I am exhausted. Gonna run upstairs and grab Parker (name of his dog) to walk him and then hit the hay. You have a fantastic day. I hope you had a smooth and easy shift,” he remarks as I run the elevator for him in more disbelief.

“…I think I like mean Greg more,” I say staring back at my reflection left by our spotless stainless-steel elevator door as the front door opens once again, but thankfully it is only the morning doorman.