Look! Up in the sky! It's a bird! It's a plane! It's Superuselessman! 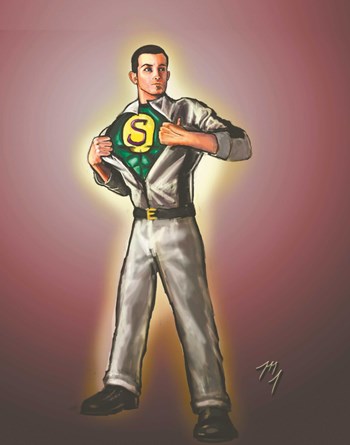 I was quite excited today. So much so that one of the last things on my mind was writing a column, but here we are.

I had ordered a new coffee table from IKEA a couple days ago and it was finally ready for pickup.

I jetted across the I-78 west in my black 2018 Honda Civic, as the crisp autumn air embraced my face. The almost 40-minute trek to Elizabeth, New Jersey nearly complete meaning I am that much closer to retrieving my new toy. Upon arrival, I toss the box in my trunk with excitement and proceed to hightail my way back home.

It was not until I had settled in at home and began dissecting the box that things started to make sense. Too much sense to not write a column about actually.

Just like the many parts that come included with my coffee table, each person in my building serves a vital role.

Just think about it; the mahogany wooden legs and the sturdy top would be the tenants as they make up for the bulk of the people occupying the building at any given time.

The plethora of screws, washers, nuts, and bolts are us, doormen. We keep the building standing albeit barely most of the time.

The instructions would be the property manager. She has the rules and in order to make sure that everything is running smoothly we must abide by them.

Last, and certainly least, we have that little recloseable polypropylene baggie which I am accustomed to seeing marijuana in, but not this time. It is filled with the extra parts that rarely get used.

A superintendent, in terms of a residential building, is nothing more than a glorified janitor. Their daily task goes as followed:

Have the garbage and recycling bagged, tied, and placed on the curb for pick-up on Monday, Wednesday, and Friday.
To clean the entrance of the building, mainly sweeping and hosing down the sidewalk, and other building’s amenities. In our case, the lounge and rear garden.
Handle all minor issues and repairs. Typically referred to as maintenance requests. For larger repairs, organize and supervise the work of contractors.
Being the building’s first point of contact.

Good thing my super, as they are commonly called, is really good at number five.

It is 3:30 PM, the expected time of arrival for my super, on an early fall Wednesday with enough maintenance requests to keep any super busy for at least a few hours.

I should have expected the sounds of a busy New York City sidewalk flooding the lobby as the front door swung open, but I did not. I instead heard a noise that was all too familiar.

The two quick rings of the front desk telephone invade my eardrums before the caller I.D. displays a name with its digital clock font. “George.”

“Hey, Brian. Busy day?” I hear on my end of the cord for seemingly the 100th time in his thick Eastern European accent.

“I’m a little busy right now and will be there later, but if you could hold down the fort until I get there I will greatly appreciate it,” George continues.

“Sure, see you soon,” as I placed the phone back on its receiver. “There’s a shocker,” I say out loud to myself.

6:00 PM and still no sign of George. The natives are becoming restless with their unattended requests. The last person I needed to see was making his way through the door full steam ahead. Greg was home. The tenant with the highest number of maintenance requests.

“Did he get to my stuff?” Greg says, leaving his hello where he must have left his manners. The door.

“Good afternoon to you to Greg. The super has not been in today but should be in shortly. I will bring your request to his attention immediately upon his arrival.”

“Well if you are going to tell him anyway then what the fuck was the point of me writing up the request anyway?” Greg’s arms folded, as he demanding answers that I did not have.

“Sorry, you feel frustrated Greg. We will fix it,” as I buzz Greg up to his unit.

“Only thing sorry here is the workers,” I heard faintly as he ascended up the elevator. And you know what? He was right.

It is now 10 PM one hour until I can retire from being a doorman for a whole sixteen hours and six and a half since my super should have arrived.

Another two quick rings echo through the empty lobby. It is George.

“Hey, Brian. Do you think you could throw out the trash? Still busy over here,” George says with his strong accent.

“… Sure whatever,” I said over the phone “bu…” I could not even get the rest of my sentence before being greeted with a dial tone.

That is my superintendent for you guys. The extra baggie in an IKEA coffee table box.