It’s too early for a cat fight…how about some controversy? 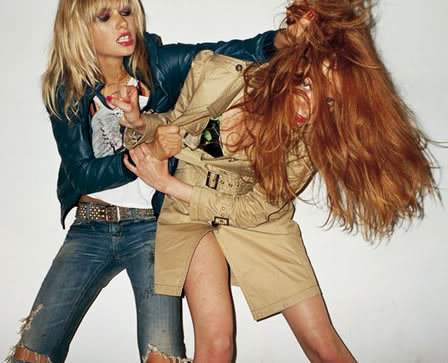 Every Tuesday morning starts like a bad dream. I routinely hit snooze on my alarm clock three times and debate on whether today school is a need to go type of situation before hitting it a fourth time. Around the ten minute mark, the one that decides whether  I’ll catch the train or a cab to my transfer, is normally when I decide that Psychology is a inevitability if not the guaranteed fail I’d receive if I didn’t go. So in the now 6 minute window I’m working with, I cram all the ritual procedures a normal morning would demand at hyper speeds. I’ve never considered myself a multi-tasker, but it’s on these types of mornings, when brushing teeth and wardrobe decisions seem to fall into the same minute of panic, that I consider adding it to my resume.

I’m out in 4 minutes, beating the ten minute cutoff and have gained a glimpse of hope for my day.

If I’m lucky my speed walk to the train is fueled by a coffee, but other mornings I fall back into an ethereal sleepwalk. My dreams start again and I find myself tripping down the Subway stairs without any recollection of my walk there. At the bottom of the steps, I’m temporarily alert; scanning to see who else is up this early. There aren’t many.

Down the stretch of the platform I can make out the flute player and Dread beard, a homeless man I named myself for his knotted beard and constant invitation to “talk over vodka.” Despite his choice to shout out government conspiracies at strangers he looked harmless and in need of a name. Dread Beard seemed appropriate.

Sadly, neither are early morning revelations worth being proud of, they’re there every morning.  I could’ve guessed they were even if my eyes were closed. They almost are. They want to close. I was ripped from my bed too soon and my body has yet to adjust to the idea of being awake or in public. Who swiped me through the turn style and, Dear God!  Who dressed me?

Right about here is where the dream turns sour. I’ve made it here; I should get points for that, a coffee if anything. But as the flute player on the platform starts to play and Dread Beard begins his protest the faint grasp I had on an optimistic morning slips away. I’ve been punked; the start to a bad day has hardly begun.

It isn’t so much what the rest of my day promises, but the fact that I have to go through it in whatever I have blindly picked from my drawer a few minutes ago. In Manhattan, that one bad, split second decision will haunt you for the entirety of your day. Sometimes you forget your headphones and instead have to listen to the mariachi band on the train. Today’s bad decision was my outfit.

It kind of matched, if you gave it the hipster advantage, which kind of compensates for the unbrushed situation under my beanie, which kind of tells everyone I didn’t wash it the night before. Tuesdays seem like a good day to live of “kind of’s.” There is room to improve later in the week. But Tuesdays, this early, I “kind of” don’t care about anything.

This pessimistic outlook is later validated once I get to campus where the rest of the student body is socializing in sweats and flip flops. They kind of don’t care either. I try to justify my attire with that reality. I tell myself, “Just get to Dobbs and people won’t look at you like a burnout that woke up late.” The truth is less hurtful when I’m surrounded by others who live by the same.

But of course, 7 a.m. is not that forgiving. Neither are the passing strangers that are now filling in to mock me with thought out attire.  I find my designated pillar to lean against and sleepily sulk as the fashion shaming begins.

Men and women chasse down the platforms catwalk as the flute syncopates with Dread Beards lyrics. I’m already sorry I hit the third snooze but comfort myself with the opportunity to invisibly critique them off to the side.

Hot. Hot. Rude. Classy. Trying too hard. I want your style, I stereotype in my mind. This morning’s lineup was dressing to impress, but who? I guiltily found myself only judging other women on the block rather than the men. They are simply hot or not. Even worse, I was mercilessly judging in the hopes that they wouldn’t do the same to me.

They say that New Yorker’s don’t judge you by who you are but by the shoes you wear. More and more I am finding that to be true…of myself (Curse you Carrie Bradshaw). The first model demands the platforms attention. Black, white, modern, sporty, the second, boho chic with pricy sunglasses. I roll my eyes, why didn’t I think of sunglasses?

I felt misinformed, like I had come casual to a formal party. Half the reason I’d moved downtown was because it held an undeniable grungy finesse. It accepted flannels and beanies as a year round trend as long as you had an iced coffee in your hand, which I unfortunately still did not.

In the ten minutes it took me to get to the train it had taken New York half the time to decide beanie season was over and that Darwin’s theory of sexual selection had dramatically shifted.

My pair of ratty sneaker made it obvious I was headed nowhere with strict standards and that I was probably not in danger of being “selected” by anyone. The F train crowd was full of stiff competition. The urge to blend in with the shuffle of school was never something I had wanted before.  But by the looks of the aggressive pair of pumps clacking down the corridor, it was an easier place to blend.

The urge to send the heels on her way with another eye roll pulled me from my haze. Darwin’s ideology still seems present in today’s social setting but is now complicated by 21st century superficiality and a sick twist on who is doing the selecting. The philosophy no longer depends on strength or smarts. It no longer depends on impressing your mate but that of the same sex. While some men still prove their dominance by beating on their chest women live through an unforgiving episode of fashion police.

“On Wednesdays we wear pink!”

The cliché line floated into my head and I couldn’t help but laugh to myself, which I’m sure just helped everyone else stereotype me with Dread Beard, the only other person on the platform who was chuckling to himself.

Perhaps that saying about judging a person by their shoes has guidelines. Maybe that theory only applies to females as we almost always judge the one in the stilettos instead of the heels alone.  It happens in politics, it happened in Mean Girls and apparently it happens on Subway Platforms.

Society loves the idea of the hot boss, the strong business woman with flowing hair and toned legs. But truly, that woman lives best as a fantasy. Otherwise she’s seen as competition to both men and woman. Thus making her the fiercest of competitors.

During Hillary Clinton’s 2008 campaign she was seen as a pants suit wearing dictator, an extreme feminist when compared to Sarah Palin. Palin wore skirts. Sadly, that only gained Palin votes towards becoming a “fashion do” rather than a presidential candidate to be taken seriously. Ironically, most of the negative feedback on their campaign trail came from women.  The same women both candidates were working to representing as strong opinionated females who had the right to live in a mans world, regardless of their platform or uniform.

Sexual selection now looks like an old western stare down between two girls. One wears pants, the other skirts. They don’t know each other and they don’t care to, they’re competition. In the middle of this crossfire, I often find that women lose sight of what they are competing for? What is the prize for being the best dressed other than a yearbook superlative when you were seventeen? The attention of the opposite sex? I can certainly tell you the toughest judges are males that watch fashion police. To the rest, a skirt is a skirt, a shirt is a shirt, and dark lighting makes up for the rest.

I stagger from my over analytical grog as the train finally arrives. New York does that too you. It misguides you and raises questions, sometimes letting you pretend you have authority to tell someone they’re doing it wrong. It’s dangerous if done in the mornings without caffeine.

I am one step closer to acceptance, one train closer to school.

Living in a fashion forward metropolis sometimes feels like survival of the fittest. But like all competitions, winning feels the best when you have earned the trophy rather than yanking if from someone with nicer shoes. For that reason, I couldn’t hate that woman in her stilettos, only myself for not waking up earlier or attempting to look more than kind of presentable.

But I could however, hate her for taking the last spot on the train before the doors shut.