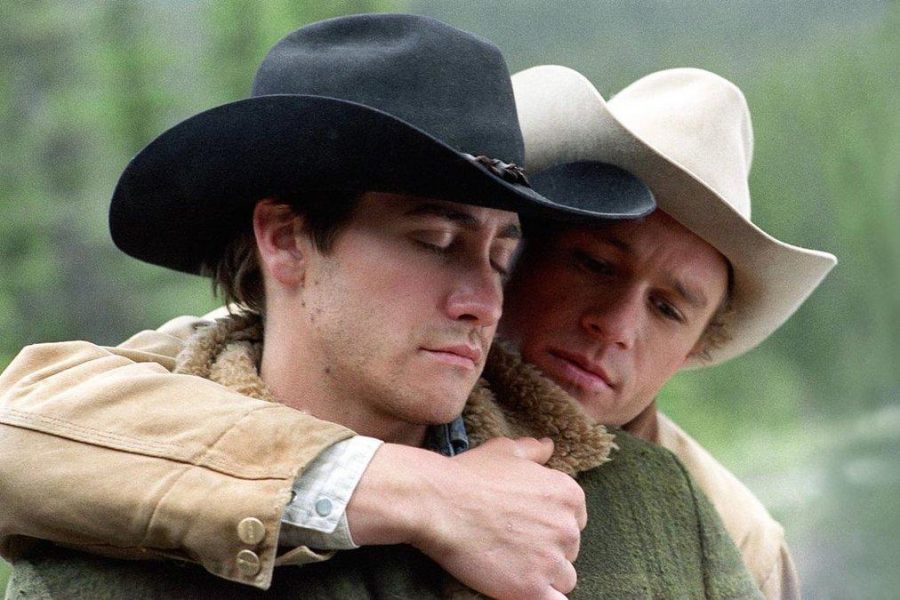 Yesterday I was re-watching on of the movies that change my life during my puberty years.

The film called “Brokeback Mountain” from 2005 directed by Ang Lee is one of my favorite movies of all times. The movie describe the adventure and rebellion of two young men who struggles with freedom and pleasure. Characters in the film help us to understand the conflict in the film, and elements such as sound/photography describe feelings and attitudes.

When we first see Ennis Del Mar at the start of the film Brokeback Mountain, he carries all his worldly possessions in a tattered brown paper bag. Near the end of the film he is given another paper bag to carry two shirts, all he has left of the one great love of his life. Ennis character changes substantially in the 20 years between those two brown paper bags. When the film opens in 1963 Ennis is so badly damaged that he is like someone who has suffered abuse. Losing his parents young, forced to quit school, raised by elder siblings who abandon him as they get married, and conflicted about his sexual identity, he is so beaten down that he walks in a slow shuffle with his head bent way forward.

He can barely meet another person’s eye and doesn’t talk except to answer a question. Jack Twist is the more verbally aggressive and outgoing of the story’s two main characters. He is far less able and willing than Ennis to explore his sexual impulses to the demands of conservative married life. Jack never seems to get what he wants. His father never believed in his son’s ideas as Jack himself says, “Nothing never come to my hand the right way.” When he tells Ennis his plan for them to run a ranch together, it doesn’t occur to him how detached from reality his fantasy truly is, how impossible everything might seem. Even though the main characters are different from each other, they both have the great capacity for love and the choices they make throughout their life makes them lose their identity of love and commitment. They are both homosexual, but this cannot be easily accepted, specially for Ennis. As a child he was scarred by seeing a lynched homosexual, Ennis can’t admit to himself that he’s gay. In their final meeting he blames Jack for his condition, “Why don’t you just let me be. It’s because of you, Jack, that I’m like this. I’m nothing. I’m nowhere.” But Ennis is wrong about himself, both men were trapped in their feelings and in the society’s perception on “abnormals” things.

In the film we are able to see many different shots and angles of Landscape. The combination of nature and love gives a sense of isolation, the prohibit, the mystery and the freedom that Ennis and Jack were looking for. Just as nature governs the ranch and mountain lifestyle, the natural force of desire directs every significant action taken by Ennis and Jack, even when those actions are against their better judgment and against acceptable social standards. The mountain represent the purity of their love but also the challenges of the civilization.

The natural beauty and the things that doesn’t cause damage can be also a place of dispute and lonely. Our main characters’ can’t share it with anyone,they can’t even tell anyone and once Jack dies, Ennis gets to deal with it all by his lonesome. The paradise they were in, surrounded by trees and animals gives tools for many interpretations, the fact that they were on a mountain which can be referred to a garden and they are naked and playing with animals can give you a biblical translation of Adam and Eve but in this case with two guys.

In a way the nature is linked to their feelings. Sound also plays an important role in the move because it transmits feeling associated with the two protagonists.The sounds played on the movie was a contrast in the feelings of our main characters, it gives a sense of darkness, almost speechless and nostalgic. The music also makes you feel scared and in the anticipation that something bad id going to happen, it can also describe the deep, chaotic and intimidating tone on this mountain.

All natural forces are not to be avoided or denied, in just a simple scenario of being. Love is to be manifested not to be shamed for and it is something no one can control just like natural forces.

A lesson learned and that goes beyond sexuality!