How Protesting Allowed Me To Express My Feelings 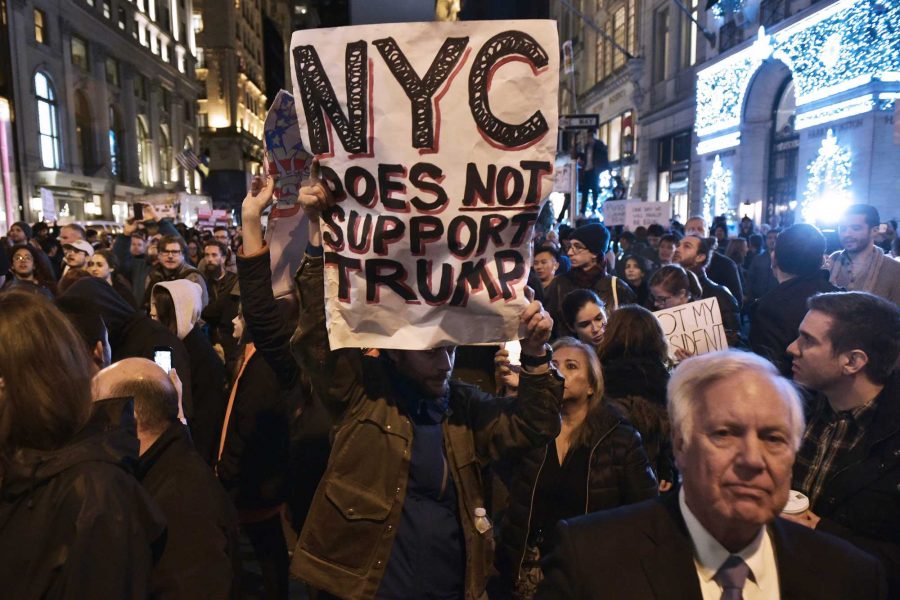 Thousands of Americans, myself included and immigrants, have been protesting for the past three months against the current President of the United States, Donald Trump.

As I was watching the election I was on the edge of my seat. I watched as the results would come in, when Hillary’s electoral votes tallied in, on top of Trump, then Trump would lead and so on.

Around 3 a.m., when I knew Hillary did not win, Trump got elected. This had sent me into a rage that the United States of America fell for his crap and voted for him. I could not help but cry to allow all my frustration out but I knew that many people along with myself would not stand for this. I knew my state of New York was against him winning the election. I was glad that the city I grew up in was not going to stand back and allow him to walk over us.

Arriving to my first ever protest, I was excited. Before going, I was told that protesting does not solve anything. My reaction was that it does solve something for the one that is expressing their right. For me, it allowed me to chant words like, Love Trump Hates, along with others that felt the same way. It eased some of the pain that I had built up against Trump pre-election, post-election, and still have today.

Today as I write this, Trump thinks that this is another reality TV show of his and can do whatever the hell he pleases. (Yes, he is the president but also needs to remember that immigrants are the ones that make up what the United States is.)

I have watched video after video of Muslim people in the United States getting harassed by people that voted for him. I have lost count of how many tears I have shed because his voters believe that all Muslims are terrorists and they are not. I love that the Museum of Moving Images is also taking a stand with Shia LaBeouf with his ‘He Will Not Divide Us’ campaign. Which is a 24/7 live stream that will continue on for the next four years of his presidency. I have yet to go and chant, “He Will Not Divide Us” to take part. I have seen both negative and positives from people that support. A positive is that I personally thank those that are freezing their butts off in Queens. A negative is those that continue to support Trump continue to watch and trash those that are against him. (Not sure why a Trump supporter would want to see this but go ahead.)

This time it was live streamed for the world to see that New York City was not going to accept that Donald Trump was going to be sworn in the following day as President of the United States. The second time was a colder night than the first protest I have ever gone too. My adrenaline was pumping. People saying the words that I was trying to express to those that could not understand why I was protesting against Trump. Surrounded by the Mayor of New York City, fellow New Yorkers, and celebrities allowed me scream “yes” whenever they said something I agreed with.

Do I ever regret going to my first protest?

It allowed me to stand up for myself not only while protesting but also in my personal life. If it was not for Donald Trump being elected, I would have never been able to voice my opinion against him (Obviously I’m against him).

So, I guess that I can thank him for allowing me to protest and take part of history. It allowed me to feel proud of those that have protested before in history like Martin Luther King Jr. and many others have passed it down that have made a difference.

As Eminem, who is featured in Big Sean’s song No Favors says, “Trump’s a Bitch.”